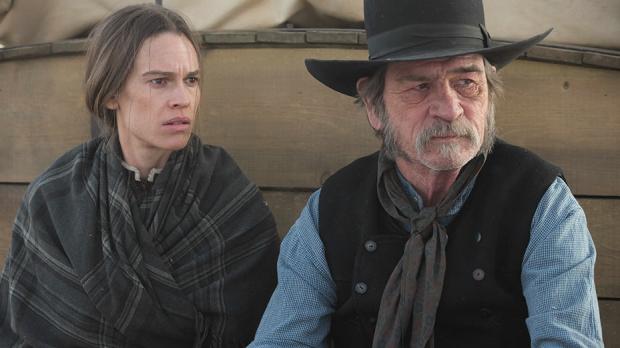 “Life gave them more than they can bear” is how the local pastor puts it. It is 1854 in an unnamed settlement territory in Nebraska. Life is hard enough for those who were prepared for the harsh conditions, but it’s worse for those who really didn’t know what they were getting into, young women brought here to be brides. Diphtheria that kills their children, nameless diseases that kill the livestock and crops, husbands who see them as breeding fields and little more—it’s no wonder that they go insane.

Tommy Lee Jones has always had the attitude toward the Old West that you might expect from a Texas boy who went to Harvard, which is to say more tied to the mythology than he probably thinks he is. His first theatrical film as a director, The Three Burials of Melquiades Estrada, piled macho stereotypes into a needlessly fractured structure. The Homesman is none of that. It is a straightforwardly told story that pays tribute to people who faced unthinkable conditions.

The Homesman unfolds around three women who must be sent away, which in a desolate region like this means back East. As none of the local men, farmers all, want to take time away from their labors for the round trip of several months, the duty is taken up by Mary Bee Cuddy (Hilary Swank—who else?), a woman who has been unable to find a husband despite having property and some money. She is considered plain and bossy; despite some makeup thickening her eyebrows, that she is supposed to be so unattractive that no man would have her is one of those movie fictions you accept and move past.

Needing someone capable of dealing with the dangers of such a trip across 500 miles of unguarded territory, she enlists George Briggs, played by the director, whom she saves from a lynching for claim-jumping.

At 68 Jones is a bit old for the role, but it’s so well-suited to him that I can’t imagine who else could have played the part. (Paul Newman once optioned the book for himself and Sam Shepard to adapt.) Briggs—probably not his real name—is a rapscallion who shows up just as the movie is starting to look unbearably grim. The scenes giving some background on the three women, played by Miranda Otto, Grace Gummer, and Sonja Richter, make you think that of all the eras of history one might hope to visit if time travel is ever possible, this would not be among them.

Still, don’t be too lulled when the film appears to be turning into an Old West variation on The African Queen. Adapting a novel by Glendon Swarthout (The Shootist, Bless the Beasts and the Children), Jones is careful not to make the story too harsh, but he doesn’t clean it up much either.

It is beautifully composed and photographed by Rodrigo Prieto (Brokeback Mountain), with many shots that could be enlarged and mounted on a gallery wall. The cast includes familiar faces in effective if small parts, including Meryl Streep (whose daughter plays one of the afflicted), John Lithgow, William Fichtner, James Spader, and Tim Blake Nelson. It’s a film worth seeing before the crowd of Oscar contenders sweeps it out of the way for the holiday season.

The Homesman opens this Friday at the North Park Theatre.