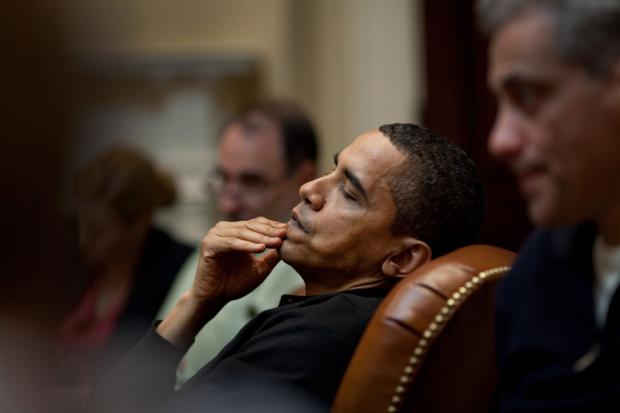 This month marks the sixth year since the triumph of hope over helplessness, fear, and greed. Young people defied their demographic chains, withdrawing from apathy and providing the votes necessary to tip the electoral scales and elect Barack Obama president. The memes and tropes were all in place. After years of George W. Bush’s halting and sometimes incoherent speech, we elected ourselves a champion talker. But he proved disastrous as a politician—unless derailing a progressive uprising was his aim.

The Obama win in 2008 was just the crest on an anti-Republican tidal wave. When Barack Obama was inaugurated president in 2009, Democrats controlled the House with a 256-to-178 edge. In the Senate, the Democratic caucus, which included two independents, controlled the chamber 59-41. Democrats hadn’t enjoyed that level of power since the 1970s. And people were stoked, spontaneously pouring into the streets on election night in almost every major American city. Obama had the Congress and the public behind him, both ready for the change that he had promised.

Given his historic victory, Obama did something truly remarkable. He grasped defeat from the jaws of victory. When you look at both state and federal legislatures and governors’ offices, the 2014 elections gave the Republicans a level of power they have not enjoyed since the late 1800s, back when the Democrats were the party of reactionaries and racists. Six years into the Obama presidency, the 256-to-178 Democratic edge Obama came into office with has been reversed to a 244-to-188 Republican advantage. The Senate flipped Republican, 53-to-44.

How did this happen? Part of the blame for the rise of the dickwads has to lay with the 2010 Citizens United ruling, which allowed legal corruption of every election since, flooding campaign coffers with corporate and plutocratic cash. Arguably the 2010 elections ended the United States’ short experiment with democracy. But in reality, Hope had already died by 2010. The dream was over even before the nightmare began. The Obama presidency had already failed.

Failure, however, is a relative term. Obama certainly failed to deliver what we hoped for, but he did do some remarkable things. For starters, he saved the global economy from collapse and depression. This seems to be the curse of modern Democratic presidencies. Democrats only seem to get a shot at the presidency after Republicans have already soiled the White House. They’re then cursed with the awesome responsibility of cleaning up the extraordinary messes left by their predecessors. And few presidents have screwed up the country and the world as badly as George W. Bush.

Admittedly, Obama did have his hands full. Foremost on the minds of Americans was the economy. Bush inherited a budget surplus and spun it into a structural deficit, hard-wired to grow ever larger thanks to a combination of tax cuts for the rich and the ignition of two inextinguishable wars. He also crashed the global economy by allowing his Wall Street masters unfettered reign to loot and pillage until the banking system was left sitting on a foundation of spurious “investment devices.”

Bush’s foreign polices threw the world into a dangerous chaos. After 19 mostly Saudi terrorists, led by a former Carter-Reagan-era CIA asset with family ties to the Bush dynasty, executed the horrific September 11 terror attacks, the world united in solidarity with the United States. Iranians took a moment of silence and gathered in public to condemn the attacks. The North Korean Foreign Ministry and the leaders of Hezbollah and Hamas condemned the attacks, as did Libya’s Muammar Gaddafi and Iraq’s Saddam Hussein. Cuba offered to send immediate medical aid. Residents of Moscow made a spontaneous memorial to the victims.

In the aftermath of the attacks, the world came together and created an unprecedented opportunity to address both terrorism and its structural causes. Bush’s response was that of a 7th grade bully on crack. The opportunity that he squandered was more than historic. His signature Axis of Evil speech, in which he attacked Iran, Iraq and North Korea, dominated his January 2009 State of the Union address. His self-declared right to start “preemptive wars,” followed by his invasion of Iraq, played a major role in the other two “Axis of Evil” nations, Iran and North Korea, pursuing nuclear weapons, which the latter acquired, along with Osama bin Laden-harboring Pakistan, during Bush’s presidency. Bush’s foreign policy calamity was fertilized with a healthy sprinkling of American weapons across Iraq and Afghanistan. This left Obama with two perpetual wars and an out-of-control military budget. Bush’s environmental policies pushed us further down the road to climate destruction while his Supreme Court nominees went on to saddle Obama with a corrupt, corporatist court.

While the world he inherited from George W. Bush certainly sucked, it also gave Obama unprecedented opportunities to change the course of the nation. But he would have to both want to do that, and inspire public support to back him in what, no doubt, would have been a fight. Absent that fight, however, it would, in the worst case, mean business as usual. That’s the path that he took.

President Obama’s signature health law certainly was an improvement over our health care Wild West, which embarrassingly set us apart from every other developed nation on earth, leaving millions without healthcare. Obamacare, however, is actually a Republican-authored plan, first instituted by Mitt Romney in Massachusetts. It was developed by Republican strategists during the Clinton-era health care debates as an alternative to the universal single-payer systems utilized by most of the rest of the developed world. This “compromise” leaves the for-profit corporate health care model intact, riddling the new “universal” system with unnecessary and unaffordable layers of corporate bureaucracy and profit-taking, while the pharmaceutical companies are still fee to extort from the sick.

This has pretty much been Obama’s blueprint for every issue—compromise with Republicans. The problem is that Republicans are now unabashed bought and paid-for tools of the ultra-rich, and their political leanings are generally off the charts, strategically, so that any “compromise” will be way to the right of reasonable. Democratic politicians across the board seem to be using the same playbook—tack toward the Republicans, both in ideology and corruption (the “being a tool” thing).

The problem is that poll after poll show that the electorate generally opposes Republican and corporatist policies on almost every major issue of contention. Democrats who run as Republican-lite candidates give these voters no incentive to participate in an electoral process where no candidate supports their views. With our somewhat unique winner-take-all democracy-lite electoral system institutionally marginalizing third party candidates, and our election financing system and corporate media monopoly silencing dissenting voices, potential voters don’t see anything for them at the polls. So they stay home.

The tragedy here, however, is that many of these same voters had hope six years ago. But hope is a dangerous thing. Let’s visit the ancient Greek fable of Pandora’s Box. In it were trapped all of the evils or the world. Pandora, in her insatiable curiosity, opened the box to look inside. The evils all escaped. All except for one. Hope. Hesiod, the story’s author, doesn’t tell us why hope stayed in the box, or why it was even there among the world’s evils in the first place. But like any drug that inexplicably makes us feel elated and irrationally giddy, its seduction can be toxic.

In the context of our contemporary Obama fable, hope might very well be an evil, seducing a generation into a naivety and setting them up for the immobilizing letdown of betrayal. Or maybe they were so stupefied by hope as to believe the battle had been won before it even began. The real tragedy of the Obama presidency is that once the electorate went into recovery, finally detoxed from hope, they seem committed to never hope again. Losing all hope seems even worse than having hope.