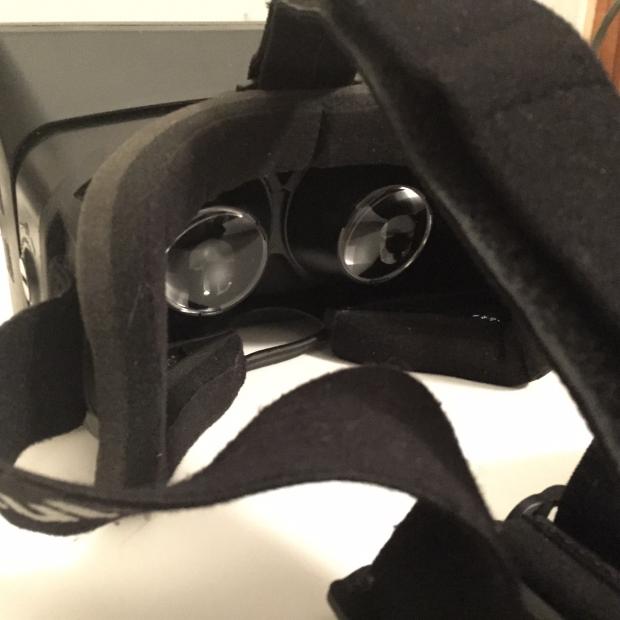 In the first issue of The Public, I wrote a profile on some talented video and music makers called Flatsitter. The duo, Jax Deluca and Kyle Marler, amalgamate video and music in their live performances to create a pretty immersing atmosphere. But nothing is more immersing than the environments they are able to create for their Oculus Rift virutal reality console. If you haven’t heard of it, the Oculus Rift is a virtual reality, 3D headset. It looks kind of like a Virtual Boy (if you remember the short-lived personal video game device from the 1990s), but much more compact, and it straps to your head. Over the weekend I had the opportunity to try out the Oculus Rift and the custom programs that Deluca and Marler have created for it.

Before I sat down to try out the virtual reality machine for the first time, Marler gave me a warning: It’s not common, he said, but some people get a little queasy while they’re along for the ride. It’s not unusal for developers presenting their Oculus Rift programs at conventions to sit a bucket next to the user, just in case. There are also some funny videos of people falling over while strapped into the Oculus Rift (see below). Truth be told, it can be a disorienting experience, but so can stepping on a skateboard for the first time. It takes a second gain some kind of foothold.

The Oculus Rift goggles are a strange sight. The headset has two large lenses inside that correspond to both of your eyes. Sitting on a table, it looks like some kind of googly-eyed alien staring back at you. When I put the goggles on for the first time, before the software loaded, it felt a little like looking into a pair of binoculors that weren’t adjusted quite right. All I could see was some kind of overlap of computer menues.

Once Marler set the program in motion though, everything changed. Suddenly I was in it. I was inside this machine and the images being projected straight onto my eyeballs were completely seamless. I couldn’t tell the difference between the images I was taking in through my right eye or left eye, like you sometimes can with binoculars: It was exactly like my normal vision, except I was viewing a completely virtual world. The intro was an eye test chart which read, in the form of a pyramid, “CASUAL SECTS WITH FLATSITTER.” I was able to tilt my head up to see the top of the pyramid and down to see the bottom. This was just the beginning. The intro page faded away and suddenly I was in an all-immersing dreamworld. I looked down to see the green grass and up to see the grey-blue sky. To my right was a cliff and to my left, some glowing orbs. From a distance a giant 3D box moved toward me. I’ve never been so impressed by a rectangular box before. I wasn’t just viewing it like one would view a television screen, I was inside of the screen, if that makes sense. If I turned my head, more of the world was revealed. I started to move up what seemed like a rainbow waterfall until I reached the apex and was able to look down to what seemed like a 50 or 100 foot drop. I slid down what became a purplish, pinsripped slide, past more glowing orbs on my right and left, and then my ride was over. I shook Marler’s hand because, damn, that was a fuckin’ awesome ride.

The device is still only available to developers, for around $300-$350 dollars, but it should be available to the public sometime in 2015, probably for around the same price. What do you see in the future for the Oculus Rift? Will it go the way of Google Glass? Or will it become a truly revolutionary device? Please share your thoughts.