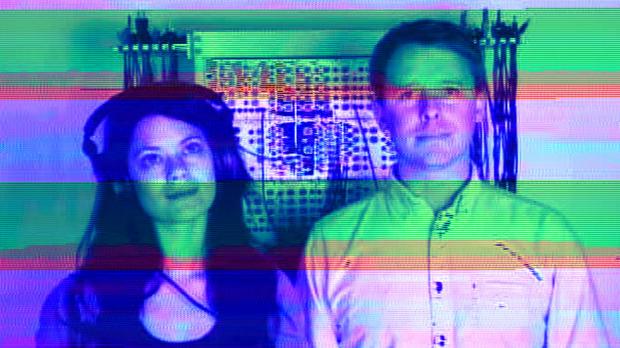 “The basis of Flatsitter is to merge new technologies,” says Jax Deluca, who, with her partner Kyle Marler, have formed the interdisciplinary video, programming, and music collaborative known as Flatsitter. The duo have taken to creating immersive sound and video installations, which they have presented live several times over the last year. Their next performance is at 8pm this Sunday, November 16 at The Wash Project—a laundromat turned electronic noise-music boutique on the West Side of Buffalo—along side San Francisco noise manipulators Sult, and Binghamton-based video and sound artist, Brian Murphy—for only $5.

Their performance is a true multimedia experience. The duo employs the use of as much new and emerging technology as they can get their hands on to create vivid sound textures and immersive video images. On stage, Flatsitter runs originally produced video images through a custom built javascript browser, which randomly chooses from the selection of videos and layers them on top of one another. The human mind has a way of syncing up sound and video automatically, even if both are random, and Flatsitter exploits this idea.

As the performance progresses, the duo cues up specific video installations that they’ve built to accompany their music. The music itself is created by mixing guitars, effects pedals, sound samples, and even iPhone apps. The result is a pulsating organ of sound and video that feels like a living entity.

Deluca, who is Executive Director of the media resource center, Squeaky Wheel, met Marler—an attorney by day—on an Amtrak train heading from Buffalo to New York City. The two discovered their common interest pretty quickly, and Marler soon moved to Buffalo to work on video projects with Deluca. They began residencies at Signal Culture—an experimental media art-space in Owego—and the Institute for Electronic Arts at Alfred University, where they had access to some interesting tools. “[The Institute for Electronic Arts] had all of these really unique analog processing tools for video that you can’t really get anywhere else, so as a result, our video images have all of these highly saturated colors, which kind of create a signature look,” says Deluca.

The pair have also been doing some virtual reality programing; working with the Oculus Rift, an all immersive 3D headset. Think Lawnmower Man, but without the “aggressive factors” or Virtuosity, but better. The device is still in a pre-consumer phase right now, but people who donated to the Oculus Rift KickStarter, like Deluca and Marler, had the opportunity to purchase one ahead of everyone else. Only a few other people in Buffalo have had access to the device, which is intended for gaming, but which Deluca and Marler are also using as a platform to produce virtual reality art installations.

They debuted their Oculus Rift instillation at Artists & Models earlier this year, where guests took turns immersing themselves in the virtual reality environments that Deluca and Marler have created using developer software. “People were blown away, it was a lot of fun,” says Marler.

In order to develop the experiences, the duo has been working with a couple of different gaming engines; Unreal Engine and Unity, which they use to create landscapes and place objects within them. The objects can even emanate sounds as the user passes by or interacts with them.

“We just got a new developer kit, so we’re kind of opening up our house and testing it out on friends,” says Marler. “It’s about taking our artwork and bringing it to a virtual landscape.”