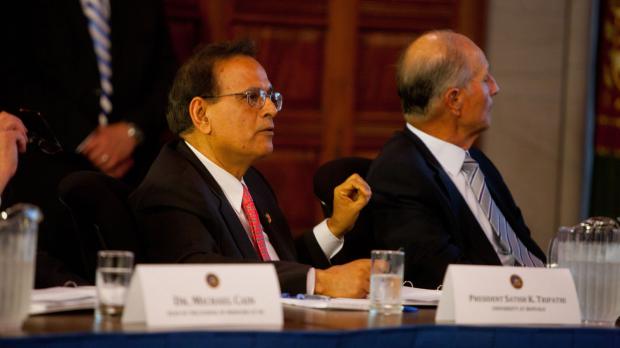 The University at Buffalo Foundation quietly invested in an offshore fund that finances fracking and oil companies, even as the university declares itself a leader on combating climate change, leaked documents reveal.

The private foundation, whose assets top $1.1 billion, is technically separate from the public university and does not disclose information about specific investments, despite mounting pressure from a student-led campaign for divestment from fossil fuel companies.

But, in data made public Friday through the so-called “Paradise Papers,” a massive leak of documents from an offshore law firm, the foundation is named as a shareholder in a fund based in the Cayman Islands. The fund is run by a private equity company, EnCap Flatrock Midstream, whose “singular focus” is investing in the North American natural gas and oil industries.

The dozen or so companies the firm has invested in are scattered across the US, from Pennsylvania to North Dakota, working in the “midstream” sector of the industry focused on processing and transporting natural gas and oil.

“They’re investing against our futures,” said Alexa Ringer, one of the leaders of Fossil Free UB, the student divestment campaign. “It’s belittling to student efforts—and to the university’s efforts—for sustainability.”

The foundation, which manages an investment portfolio of more than $900 million on behalf of the university, including its endowment, has faced growing pressure to be more transparent about its holdings. Earlier this year, the representative bodies of both the faculty and professional staff joined student governments by voting in support of the divestment campaign.

“We are educated people. We are not climate deniers,” said Dr. Philip Glick, the chair of the Faculty Senate. “We understand that fossil fuels are contributing to global warming and we think wherever possible, and wherever practical, we would like to try to limit those investments.”

UB President Satish Tripathi has emphasized the importance of clean energy, including the university’s goal of becoming carbon neutral by 2030.

“We are not paying lip service to reducing our carbon footprint,” Tripathi wrote in a “sustainability commitment” published on UB’s website earlier this year. “Rather, we are taking clear, measurable action to respond to the increasing pace and intensity of global climate change.”

Tripathi has been less vocal, however, about the foundation’s investments, telling student campaigners that he doesn’t control its policies and declining to publicly support divestment. Tripath serves on the foundation’s board of trustees; several other senior administrators are non-voting members.

The university’s public commitment to sustainability is “hypocritical” in light of the foundation’s investments, said Ringer, the student activist. “It’s silly to think that you can have composting in the dining halls and say ‘Look, we’re green’,” she said. “To have X amount of money invested in any kind of fossil fuels is already hypocritical.”

Officials from UB and the foundation refused interview requests. In a statement that did not address the EnCap investment specifically, executive director Edward Schneider said the foundation is “actively looking at our policies governing investments in general, including fossil fuels.”

“UBF has to be thoughtful and deliberate in its investment approach as we seek to maximize returns and the benefits for the University,” he said.

Visitors to UB’s North Campus are greeted by an array of 3,200 solar panels that generates enough energy to power hundreds of student apartments. The university runs a bike share program, invests in energy-efficient buildings, and offers charging stations for electric cars. Food waste from dining halls is turned into compost. Three years ago, UB launched an institute dedicated to studying green energy and environmental protection, with an initial commitment of $15 million to fund hiring and research.

Among the “points of pride” listed on its website, UB points to a “Green Power Leadership” award it received last year from the Environmental Protection Agency.

“They’re just undoing all the work that they’re putting into making the university green and sustainable,” said Nicole Stephan, another member of the campaign.
As well as concerns about climate change, opponents of fracking point to a host of public health and environmental concerns. At the end of 2014, Governor Andrew Cuomo banned fracking in New York, citing health risks, like the possibility of chemicals seeping into drinking water supplies and respiratory problems from gases released into the air. A study last year by the US Environmental Protection Agency raised similar concerns about groundwater contamination.

The foundation’s priority in investing is to “provide UB with a predictable and substantial source of revenue,” records show. Even though the foundation maintains it is separate from the university, its core mission is to support UB financially.

“Our financial practices are a reflection of our values, and the values of the communities we serve,” the foundation’s website says.

In becoming a shareholder in the Cayman Islands partnership “EnCap Flatrock Midstream III-C L.P.”, the foundation joined other institutional investors eager to capitalize on the North American fracking boom and the subsequent demand for pipelines and processing facilities for the gas extracted.

The EnCap fund, which was launched in early 2014, raised $3 billion in four months and stopped taking on new investors that May, according to the firm. Other shareholders include Mercy Health, the largest healthcare provider in Ohio, the American Federation of Musicians and Employers’ pension fund, and the Peterson Institute for International Economics, a Washington think tank, the Paradise Papers database shows.

Last year, the foundation had investments worth $163.7 million outside the US, tax records show, mostly in Central America and the Caribbean.

It’s unknown how much of the foundation’s investments are offshore. But its financial statements for the tax year ending this June show $124.8 million—roughly 13 percent of its total investments—in venture capital and private equity partnerships. Generally speaking, many hedge funds are established offshore because of the tax benefits this offers to investors.

Universities’ endowments are usually tax-exempt. But if they make investments financed by debt—as private equity firms and hedge funds often are—that income can be subject to US tax. Investing in partnerships in low-tax jurisdictions, like the Cayman Islands, is a legal way to avoid paying this tax.

It’s uncertain whether the EnCap partnership brought the UB foundation any tax benefits. It’s also unclear how much the foundation invested in the fund or whether it is still a shareholder.

The UB Foundation joins dozens of US universities named in the leak as shareholders in offshore funds that invest in oil and gas—among them Columbia, Syracuse, Dartmouth, and Stanford.

Students campaigning for divestment have faced one challenge in particular: they have no idea what, exactly, the foundation has invested in.

When Fossil Free UB representatives met earlier this month with Edward Schneider, the foundation’s executive director, they asked for an end to any direct investments in the 200 most-polluting fossil fuel companies—industry giants like ExxonMobil, BP, and Chevron.

The foundation told them it didn’t have any direct investments in those companies.

The EnCap fund wouldn’t qualify. It’s not a direct investment and backs mostly smaller and younger companies, some of them launched with the venture firm’s backing. Still, some of the companies in its portfolio count major corporations among their customers.

The discovery of the EnCap fund is “definitely motivation to do more,” said Ringer, one of the Fossil Free UB campaigners. “Just because they’re not investing in the top 200 doesn’t mean they’re perfect, by any margin.”

A separate advisory committee is studying the question of responsible investment and Schneider told the Buffalo News in April that the foundation would review its recommendations.

The foundation has long faced calls for more transparency. The state legislature has previously considered a bill that would subject the foundation to the state Freedom of Information Law, and the foundation has been challenged in the courts for its insistence that it is exempt from the law.

An attempt last year by Faculty Senate chair Dr. Philip Glick to add student, faculty and professional staff representatives to the foundation’s board was rebuffed.

Earlier this year, the representative bodies of both the faculty and professional staff passed resolutions calling on the foundation to “immediately freeze” any investments in the fossil fuel industry, divest from both direct ownership and holdings in funds that include fossil fuel within five years, and reinvest in clean energy.

Investments in companies that “threaten environmental sustainability”, the resolution noted, “do not constitute socially responsible investments and fail to promote UB’s values.”

Both the undergraduate and graduate student governments had already voted to support the divestment campaign.

Charlotte Keith is a reporter for Investigative Post, a nonprofit investigative journalism center focused on issues of interest to Buffalo and Western New York.