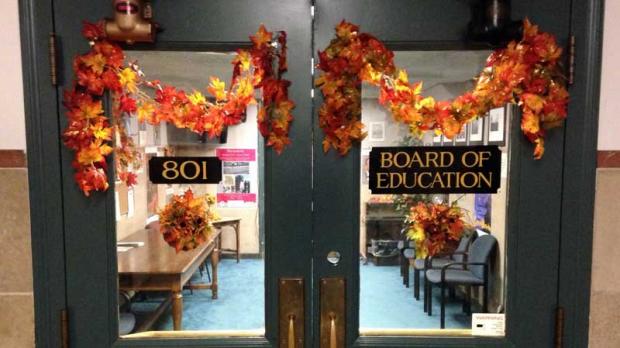 “Should we even call the movement to privatize education ‘reform’ – a word that itself calls to mind progressive struggles and ideals?” asked one member of the scores of school teachers, parents and concerned citizens present.

“More like Corporate School Deform!” rang out an alternative suggestion from the other end of the room.

There was no formal agreement on the future use of the verb, although the informal suggestion did echo through the vaulted space of Karpeles Manuscript Library unchallenged.

At the heart of a seemingly minor point of usage is the seed of a major debate about what the privatization of public educational resources means.

Three speakers took the floor of Karpeles, offering three perspectives on the fight over the control of educational resources: Leonie Haimson, the executive director of Class Size Matters and resident of New York City, gave a front line account of the effects of heavy charter school influx; Dr. Mark Garrison, Professor of Education Policy and Research at D’Youville, denounced the radical change in the conception of the student brought about by privatization advocates; and, Eric L. Mihelbergel, a parent activist with the New York State Allies for Public Education [NYSAPE], outlined strategies for parents who want their kids exempted from the Common Core tests.

The present article centers on Haimson’s case study, as it provides an example from recent history of what the privatization agenda looks like in action.

The book on charter schools, warns Haimson, is in: they suck up public funds, while keeping their own records private; they are relentlessly focused on testing to the detriment of traditional learning models; they have a poor record of dealing with special needs students, and a worse record of booting kids who aren’t living up to their standards; and, they are intent—in partnership with data-mining companies—to market and sell students’ personal info.

In some cases, charter schools and public schools are housed in the very same building—two schools in one. From co-location—he technical name for the public/private splice—has sprung problems never seen before by educators. Turf battles over territory within schools. Administrative wrangling for space comes at the students’ expense.

At this point during Haimson’s talk, the specter of Eva Moskowitz, the founder and CEO of Success Academy Charter Schools, wafted into the room.

Moskowitz, a divisive figure, is lauded by advocates of CSR as a no-nonsense visionary, and reviled by opponents as an overpaid (salary and bonus for 2012-13: $567,500) and harsh administrator, whose schools employ non-union teachers.

A recent New York Daily News opinion was remarkable in its inability to make Moskowitz:

“Is Eva Moskowitz the Michael Jordan of education reform, or is she Mark McGwire? I have no idea…”

Writing on her blog, Diane Ravitch, former Assistant Secretary of Education under Bush Sr. and Clinton, had a different sports analogy in mind:

“Her numbers are gimmicks, obtained by removing low scoring students from her schools. The high-scoring students remain and the low-scoring students are gone, along with their potentially disruptive effects on classrooms and the school as a whole. Eva is more like Lance Armstrong. They both win through artificial means. Lance through blood transfusions and EPO. Eva through attrition of students and obsessive test prep.”

In May, Haimson, in a testimony before the NYC Council Education Committee, denounced the “myth” that charter school students scored higher because they’re better at educating kids. Echoing Ravitch, she claims that the numbers are cooked. In particular, she noted that the combined average suspension rate at Success Academy schools was about twice as high as district public schools. She added that the Success Academy schools lose half of their students by sixth grade.

Teachers in the audience at Karpeles were themselves familiar with the experience of accepting—often in the middle of the school year—underperforming kids that had been cut free by local charters.

The forum resolution and the school board majority’s vision

In July, the Buffalo School Board Majority released its mission statement, “A Vision for Buffalo Public Education,” making its intent clear regarding the future of charters in Buffalo:

“The Board should actively recruit high performing providers by offering space in vacant school buildings, co-location space in operating schools and an enhanced charter reimbursement formula.”

(Three phrases should set off alarms in the head of a thinking person: “high performing,” “co-location” and “enhanced charter reimbursement formula.”)

Last week, the contentious issue hit a low boil after school board majority member and local developer Carl Paladino was accused of having a conflict of interest.

In a Monday editorial, the Buffalo News came out on the side of Paladino, while accusing his accusers of obfuscating the issue: if Paladino’s vote is rendered nil, then the majority is no longer a majority, and the board’s ability to make decisions compromised, the paper opined.

In their defense the News doesn’t say that Paladino doesn’t have a conflict of interest—instead, downshifting into relativity mode, the editors invite the reader to ponder the meaning of ‘interest’:

“Paladino said he expects only a 10 percent return but invests in charters because he believes in them.”

Or does he believe in them because he expects a 10 percent return?

Indeed, if the schools perform at a higher rate, would the conflict become greater? Finally, what percentage would the investments have to achieve in order for the News to reconsider its position?

The News wraps the editorial with an uninspiring flourish, noting that, depending on where one comes down on the conflict of interest issue, the “real losers” will be the children “whose education might be rescued by an expansion of charter schools.”

The resolution from Saturday’s forum was less wishy-washy:

The Buffalo News’s editorial board is eager to add its weight behind the push for the Board Majority’s vision for increased charter school presence; however—as reports on their underwhelming performance and questionable practices in New York City show—the urge to do something should not preclude the opportunity to do something good.

This week there’ll be a chance for parents, teachers and concerned citizens to voice their concerns to the school board.

Forum members have organized a “Pack the Boardroom!” event for the upcoming board meeting on Wednesday, November 19 in Room 801, Buffalo City Hall at 5:30pm.