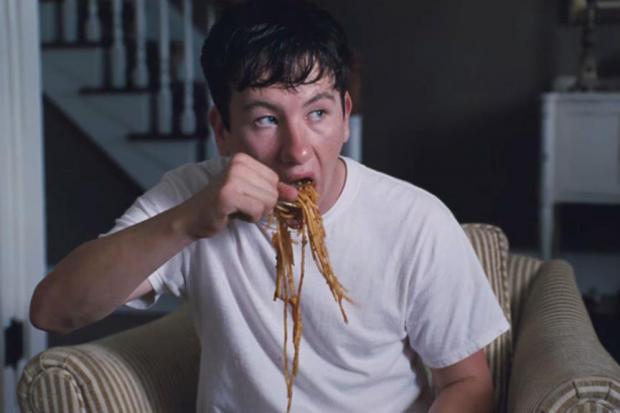 If, like me, you enjoyed last year’s The Lobster, Yorgos Lanthimos’s absurdly funny satire on human relationships and the social pressures to find a life partner, you’ve probably been looking forward to his new film, The Killing of a Sacred Deer. It’s been a tortured wait—the film was supposed to open in October but was postponed, and this week was booked at the last minute into one of those suburban multiplexes owned by a chain that seems to think that publicity is more trouble than it’s worth. (I guess in their world people decide what movie to see by showing up at the theater and checking out the posters.)

I saw Sacred Deer (I’ll explain the title later, at least as best I can) in September at the Toronto International Film Festival. It was the second of only two films I saw there this year. It wasn’t exactly the cause of my heading home after only one day, but it didn’t make me want to stay, either.

So when I was invited to a local press screening of it, I figured I’d give it a second chance. That additional viewing certainly did clarify my thoughts about it. I hated it.

Sacred Deer opens with a blast of portentous classical music before opening on a shot of a live human heart. (Given what follows, this is the height of irony.) This is our introduction to Dr. Steven Murphy (Colin Farrell), a successful heart surgeon. He is married to Anna (Nicole Kidman), an ophthalmologist who is understanding of her sexual predilections. Their favorite game is one they call “general anaesthetic,” which, given his profession, is more than a little icky.

They have two children, young Bobby (Sunny Suljic) and his older sister Kim (Raffey Cassidy). At a cocktail party, the Murphy’s tell an acquaintance that “Our son just started piano lessons, and our daughter started menstruating last week.” Are we meant to laugh at that? It’s hard to tell, given the flat, affectless way in which all of the dialogue is delivered. It’s as if these people are at all times struggling not to say what is on their minds.

Steven has occasional meetings with Martin (Barry Keoghan), a creepy teenager with dead eyes. The secrecy with which these are treated makes us suspect the worst, that Martin is a pederast. Lanthimos seems to want us to think that though (spoiler alert, if it matters) it isn’t true. Why? All I can guess is that he wants to keep us off guard for what’s coming.

We’re about halfway through this meandering movie before it comes into focus: as punishment for a sin, Steven will be required to kill a member of his family, If he doesn’t, all three will die.

How? Why? Good questions, but questions you won’t get answers to if you sit it out. There are surface explanations, but they don’t make a lot of sense. Lanthimos wants to set up this situation, and apparently doesn’t much care about whether you find it plausible.

The Lobster was his first English language film, but Lanthimos had previously gained international attention for his films Dogtooth (2009), a prizewinner at Cannes and nominee for best foreign language film, and Alps (2011). Of the four films, The Lobster is the outlier for its comparatively open humor. A native of Greece and a devotee of Stanley Kubrick, Lanthimos has a very European approach to satire that has nothing to do with empathy. But while his other films had particular satirical targets (childraising in Dogtooth, mourning in Alps), the point of this one escaped me entirely. The title refers to the story of King Agamemnon in Greek mythology, who offended the gods and was required to sacrifice his daughter, Iphigenia. You can make some connections from that to the film, though given the confounding number of different versions there are of the myth, I wouldn’t recommending spending a lot of time on it.

I suppose the best thing to be said for The Killing of a Sacred Deer is that it would be even worse if we cared about any of the people in it, something that Lanthimos does his best to prevent. Even at that, it’s hard to sit through scenes of one character being tortured. These reminded me of Denis Villeneuve’s grotesque Prisoners (2013), in which High Jackman and Jake Gyllenhaal torture a young man (Paul Dano) they suspect of having kidnapped Jackman’s daughter. Come to think of it, that movie involved the symbolic killing of a deer. But trying to connect the two would mean wasting more time thinking about two unpleasant films than I really care to do.