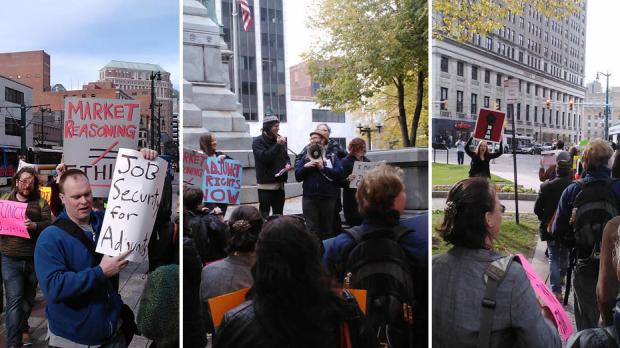 ​On a recent Friday afternoon in Lafayette Square, 60-some activists representing the Buffalo Adjunct Movement!, or BAM!, gathered to raise the rallying cry for their kind locally and nationally. BAM! is a collection of college instructors with no permanent link to their respective institutions, which, on that day, included Daemen, Canisius, D’Youville, UB, ECC, and Villa Maria.

(Those who may have liked to represent Medaille, pointed out one participant who wished to remain anonymous, were conspicuously absent: The school forbids its own pool of temporary teachers from organizing. Medaille declined to comment on the story. Calls to the other colleges whose adjuncts were represented at the rally were not returned.)

Each of these local schools employs, as a supplement to its securely employed staff, a bevy of disposable professors, who, despite having accreditation and years of experience, are hired on the cheap. They teach the same students as tenured and tenure-track profs and bear the same responsibilities, but are compensated at a rate that keeps even the most industrious living below the poverty line.

The list of grievances outlined by the assembled was succinct: unfair pay, no offices, no benefits, no voice on campus, and no access to institutional resources.

In the words of one of the day’s chants, BAM! demands “education not exploitation.” They also hope that their message is heard by other adjuncts in the area.

The AAUP estimates that the average adjunct earns about $2,700 per course. For some the number is much lower. One BAM! member, Brian Eager, said that he applied for a position at Bryant & Stratton College that paid $1,350 per class.

Do the math: An adjunct taking on a three courses per semester earns, before taxes, $16,200 per year. It’s a fate in which some might find cold comfort; yet, schools are under no pressure to guarantee classes, meaning that many adjuncts have the additional anxiety of not knowing—sometimes even one week before classes start—whether they’ll be teaching three classes or none.

Kate Caccavaio, PhD, told me that she works in retail to support her habit of educating the nation’s youth.

She’s not alone. Struggling Americans with advanced degrees are a growing segment of the populace. A report from Austin Nichols, a senior researcher with the Urban Institute, showed that, from 2007 to 2010, the number of people with master’s degrees receiving food stamps jumped from 101,682 to 293,029. In the same time span, PhD holders on food stamps increased from 9,776 to 33,655.

It’s not as though degree-granting institutions are hurting for students. The National Center for Education Statistics found that between 2001 and 2011 enrollment increased 32 percemt, from 15.9 million to 21 million

Nonetheless, from 2008 to 2013, spending is down 28 percent nationwide, according to the Center on Budget and Policy Priorities [CBPP]. New York State’s cuts have been less severe (14.7 percent) than the national average (28 percent) but significant: In 2013, NYS spent $1,482 less per student than it did five years earlier. However, the CBPP adds that, at the same time, the average annual published tuition at four-year public colleges has grown by $1,850 or 27 percent.

Derek Curry, who temps at UB, suggested that the reason for the current situation is not only funding shortfalls but institutional priorities. Universities have moved toward the temp solution, in part, to account for bloating elsewhere-among in administration.

The point is made in the 2011 book, The Fall of the Faculty, by Benjamin Ginsberg, who opines that the university is swollen with administrative functionaries. The problem is exacerbated by the fact that many of these same functionaries have little to no experience in the classroom. 40 years ago, he writes, the same duties were handled by faculty. That role of the faculty has disappeared, leaving career admins in their place to steer the ship of the university.

Marc Bousquet writes in the Chronicle of Higher Education that fitting out the staff with adjuncts gives a way for administration to cry “budget crisis” while redirecting institutional funds for self-serving purposes:

“[M]ost critical observers note that ‘saving’ on $70,000 faculty salaries generates a vast, expensive need for $80,000- to $120,000-per-year accountants, IT staff members, and HR specialists, plus a few $270,000 associate provosts. Not to mention the $500,000 bonus awarded to the president for meeting the board’s permatemping target and successfully hiding the consequences from students, parents, and the public.”

The BAM! rally was intent on making the labor of its constituents visible–to students, to parents and to the very administrators who’d prefer to have them toil in silence.

Melissa Mosko, a full-time professor at Canisius, and self-described ally of BAM!, argued that the market-based approach of admins to education poses the greatest threat to students. How can overworked and underappreciated educators be expected to deliver quality instruction at a consistently high level?

Another adjunct, Sigrid Fertig, who said she’s been at it for 25 years, points out that “some college football coaches make over a million a ​year. ​​​​Since 1970, the salary of college presidents has gone up 35 percent. By contrast, adjunct pay has gone down 49 percent. Adjuncts make less than federal minimum wage.”

Indeed, another participant at BAM!’s rally estimated that she made $4.87 per hour.

After hearing from several speakers, the group took a lap around Lafayette Square before marching to Central Library. I followed them into the marble foyer, and past the reference desk, where they took their seats, produced stacks of binders and notebooks and quietly began to grade student tests and papers. It was the first grade-in I’d ever seen. I think it was a first for the library’s staff also.

The process of making one’s labor visible in this case was silent but disruptive.

BAM! held its first event in April and looks to be building a head of steam. It holds its next meeting in the back room at Casa di Pizza (447 Elmwood) on November 15 at 4pm.