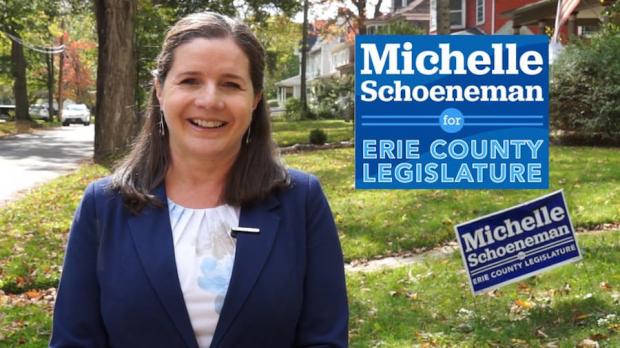 Democrat Michelle Schoeneman has filed a summons and notice of her intent to sue her opponent, incumbent Erie County Legislator Joe Lorigo, for defamation, in response to a robo-call and television commercial paid for by Lorigo’s campaign.

Both the call and the TV commercial claim that Schoeneman, if elected, will advocate for “free heroin shoot-up” sites in East Aurora and West Seneca. The suit names Lorigo and Chris Grant, a Republican political operative whose consulting firm, Big Dog Stratgies, has done work for Lorigo’s re-election campaign committee.

Yesterday we reported on the robo-call, which went out Wednesday evening, and TV commercial, which began airing on Thursday. The robo-call did not identify its sponsor or name Lorigo; the TV commercial indicated it had been paid for by Friends of Joe Lorigo, Lorigo’s campaign committee. Grant subsequently tweeted the video, reiterating the claims it made about Schoeneman and adding “This is what Tuesday is all about.”

Electronically FIled Summons With Notice by Geoff Kelly on Scribd

Schoeneman released a statement along with the summons and notice of intent to sue:

This is why people hate government and politics. This is why people are reluctant to run against a wealthy and powerful political machine like the Lorigos. It has become commonplace for politicians and their campaigns to spread lies about other candidates and issues all in the name of winning. Enough is enough! I’m filing this summons to take a stand not just for me, but for anyone considering a challenge to the status quo in politics. Good, honest, hard-working people should not be afraid to run for office because of the possibility of a smear campaign being launched against them. Any money awarded to me in this lawsuit will go to local non-profit organizations, including those that address drug and alcohol addiction.