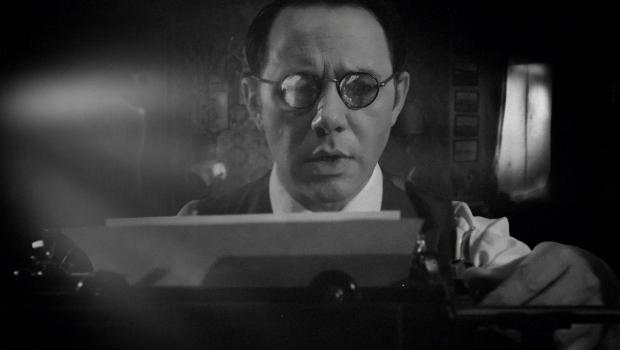 I am told that there are a few folks who in recent years have sat through every film unspooled at the Buffalo Dreams Fantastic Film Festival. I assume they have purchased the all-fest pass, a bargain at $100. Wish I had the time to sit in movie theaters for 10 days in a row, subsisting on pizza and popcorn! Buffalo Dreams has always shown good taste in its bookings, to the point that in the past when I have come across a film I thought was worth avoiding I have always pointed it out, just to show that I wasn’t otherwise raving indiscriminately about everything.

From the films that I was able to preview in advance, my choice for the “If you only have time to see one movie” slot is Borley Rectory (Sun Nov 12 noon). Even if you’ve seen every horror/sci-fi/fantasy film offered in the preceding work of the festival, this pseudo documentary about the infamous haunted house in England will be a breath of fresh air. Variously evoking Eraserhead, Peter Greenaway, and Guy Maddin, the film was crafted over six years by animator Ashley Thorpe, who filmed live actors in front of green screens of archival photos over which he layered subtle effects. At first glance it looks like a stodgy British ghost story from the 1930s (think Tod Slaughter), but it is a much more complex film that it initially appears to be. Probably the only chance you’ll ever have to see it on a big screen, where it will doubtless reveal no need of hidden details.

Fans of straightforward horror movies—I assume there will be some there—will want to check out The Harrowing (Sun Nov 5 2:45pm), which can be described as Sam Fuller’s Shock Corridor as it might be remade by Dario Argento: A cop, guilt-stricken when his partner is slaughtered in a cult killing, checks into a mental institution run by a leader of the cult (Arnold Vosloo). If you like religious-themed supernatural stories, Buckout Road (Sat 7:30pm) pits three college students in the least scary city in America, White Plains, New York, against a force that could be God, Satan, or both. Don’t doze off during either of these films: Both have endings that will pull the rug out from underneath you if you haven’t been paying attention (though both films will be followed by Q&As with the films’ respective directors, so you can ask them about anything you missed).

If festival organizers Greg Lamberson and Chris Scioli were giving out a prize for best title, it would have to go to the comedy 6:66 PM (Sat 5 pm). A spoof of TV reality paranormal and serial killer shows, it’s not quite as funny as the same team’s Massacre on Aisle 12, but then that’s an awfully high bar to pole vault over. (Or a low bar to limbo under). Q&A with director/co-stars/producers Chad Ridgely and Jim Klock, back for more after having had such a good time at last year’s festival.

If the premise of the comedy Mercy Christmas—an overweight loser is invited to a family Christmas dinner by a hottie who didn’t mention that he’s not going to be at the table but on it—sounds familiar, you may have seen the Anthony Perkins-directed Lucky Stiff (aka Mr. Christmas Dinner), made so many years ago that Perkins was still alive. This one is much better. Along with a fair share of gore and slapstick gags, director Ryan Nelson contrasts the banality of this apparently typical suburban family’s holiday celebration with the brutality of what they’re doing to their “guests” (Thu Nov 9, 5pm).

The nerve-wracking Get My Gun (Mon 9:20pm) starts out detailing the working life of a housekeeper at a no-tell motel, which is scary enough. (Don’t open the bathroom!) Her life is not improved when a guest attacks her, though the title clues you in that she’s not going to be abused forever. There will be a Q&A with writer-director Brian Darwas and writer-producer Jennifer Carchietta. (This seems like a good time to point out that most festivals do not have nearly this high a proportion of filmmakers attending their screenings.)

Sunday night is given to a name you’ve proably heard a lot over the past few years in conjunction with the phrase “Now being filmed in Western New York.” Though he’s only in his early 60s, Fred Olen Ray has a staggering 150 directorial credits on imdb.com (and only three of those are shorts). He’ll be on hand to show what is probably his best movie, the 1988 spoof Hollywood Chainsaw Hookers. He’ll be joined by his son Chris, who will show his new film Circus Kane.

If you’re not into horror films and yet still reading this, Buffalo Dreams has screenings for you too. The family-friendly features Thrill Ride and Princess Sparkly Butt and the Hotdog Kid will play at 11:30am on Saturday and Sunday, respectively. Weekday matinee shows will feature foreign and documentary films of the kind you might otherwise find at the Eastern Hills Cinema.