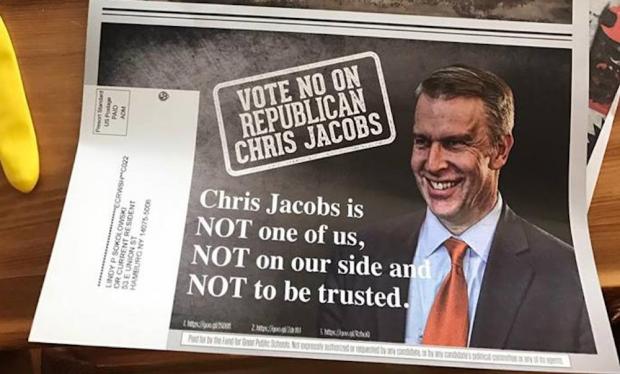 If you’re a Democrat, there is much to like about Amber Small, who is running for the 60th District state Senate seat. Her policy positions are reliably progressive; she is smart and, judging by her campaign, hardworking. And heaven knows this region could use more women in elected office.

But there have been some ugly tactics in her campaign as well. One example is the flyer above, paid for by the Small campaign Fund for Greater Public Schools and distributed earlier this month. The text is pretty standard fare: taking to task Small’s Republican opponent, Erie County Clerk Chris Jacobs, for his pro-charter school positions; pointing out that he has, as a result of those positions, been the beneficiary of financial support from pro-charter groups outside the region; stirring up some resentment about his family’s wealth; tying him to the lately scandalous name of developer Lou Ciminelli; etc. Some of the claims are fair game—it certainly makes sense for Small to stir up public school teachers, who are plentiful in the district and tend to be prime Democratic voters.

Some of the claims are stretches, but hardly out of bounds in the context of Western New York politics. And certainly no more of a stretch than the most recent pro-Jacobs TV commercial that attempts to associate Small’s candidacy with New York City Mayor Bill de Blasio, whose campaign finances are under investigation. (Matt Tighe, Small’s campaign manager, worked on the de Blasio campaign.) It’s two degrees of guilt by association; it’s nonsense, but it’s how politics is played here. And probably everywhere.

But that manipulated photo is a little bit nuts. Jacobs is an affable guy with a winning smile. The reason he’s polling ahead of Small in a district that, despite Senate Republicans’ best gerrymandering efforts, favors a Democrat is not simply that he’s a moderate Republican with a big name and a lot of money to spend on making it bigger still: He’s also widely known to be a nice guy. To PhotoShop him into a leering devil is cheap and demeans the intelligence of the voting public. Do the creators of a mailer like this believe that voters are taken in by such caricatures? Don’t they know that proximity to such poison damages the candidate it is meant to help?

In any case, that’s not what I’m writing about today.

I’m writing about another example of dirty politics, one that has not appeared in the mailboxes of 60th District voters, at least not yet. It’s a story meant to damage Jacobs that has been fed to reporters (including me) since midsummer, first by Jacobs’s Republican primary opponent, Kevin Stocker, and more recently by someone else—someone supporting Amber Small.

The story is this: Jacobs donated $2,700, the maximum allowed, to Jeb Bush’s presidential campaign in 2015. His girlfriend, Martina Rehorik, also maxed out to Jeb Bush with a $2,700 donation. Rehorik once worked for Jacobs in the clerk’s office, with a salary of $41,317. At that salary, the peddlers of this narrative argue, she could not afford such a donation. Ergo, Jacobs gave her the money to donate in order to circumvent federal caps on individual donations to a campaign. There’s also some allusion to the fact the Rehorik is “a foregn national” and possibly ineligible to donate to political campaigns in this country.

The biggest problem with the story, which I pointed out to a Democratic elected official who conveyed it to me a few weeks ago, is this: The address attached to Rehorik’s donation is the same as Jacobs’s on Saybrook Place in Buffalo. They were living together. No one was trying to hide anything. If a married couple gave $2,700 each to a candidate, would anyone worry about who earned the money? Or from whose bank account the donations were drawn? Why shouldn’t an unmarried couple, living together, do the same?

There are other problems, too: Rehorik worked in the clerk’s office. They started dating, and then she left the clerk’s office for another job. That was in February 2014, more than a year before the donations to Jeb Bush occurred. Further, she has a green card: She can’t vote, but she can donate.

Those alone may be the reasons no politics journalist in town has bothered to write the story. The reason I’m writing about it is that I think it’s interesting to look at how the story has been manufactured and then peddled to reporters over the past few months.

Here’s a summary, based on my own experience of this creature:

1. It appears to begin with Stocker, who writes a letter in early August addressed to the US Attorney General Loretta Lynch, US Attorney Bill Hochul, New York State Attorney General Eric Schneiderman, and the FBI. In the first part of the letter, Stocker alleges illegalities and bias in the petitioning process for the Conservative Party primary. Appended to those allegations is the story about Jacobs’s donations to the Bush campaign, the details of which Stocker says were forwarded to him by an anonymous source who he believes to be an Erie County employee. You can read that letter at the end of this post.

2. The petition issues are litigated and Stocker loses; all that is reported in the media. Nobody bites on the story of the Bush contributions.

3. Next, in late September, after Jacobs has won the GOP primary, a person from Rochester—outside the district—named Beatriz LeBron files a letter with the Federal Elections Commission reiterating the allegations in Stocker’s letter. This creates a case file at the FEC. It will also provide Small’s supporters with a third party to which to attribute the allegation. Anyone can send a letter to the FEC, lodging a complaint about suspected wrongdoing, and create a case file. You can read LeBron’s letter at the end of this post.

4. In the weeks that follow, a number of Democrats involved in politics approach me and other reporters in town with the story of Jacobs and Rehorik and the Bush donations. Once again, nobody bites.

5. Finally, last week, perhaps reluctant to waste the effort that has gone into promoting the story so far, someone using the email address investigativerpt@protonmail.ch puts out a press release with the subject line “Chris Jacobs Subject of Federal Investigation”:

Today, the Federal Election Commission confirmed that it has initiated an investigation of Chris Jacobs and his girlfriend for the violation of federal election law. According to correspondence from Julia Queen, Public Affairs Specialist at the Federal Election Commission, the FEC’s enforcement process is confidential and they are prohibited from providing information on pending matters; but a leaked copy of the complaint outlines the accusations against Jacobs.

Jacobs allegedly funneled money to Martina Rehorik to usurp federal campaign contribution limits in the 2016 presidential primary. Jacobs, a multi-millionaire and heir to a family fortune, sent the maximum contribution of $2,700 to Jeb Bush’s campaign on 6/29/15. He then allegedly provided Rehorik with $2,700 and directed her to ‘max-out’ to the campaign. She made the contribution on 7/15/15, a campaign finance reporting deadline. This is especially significant because in addition to being Jacobs’ girlfriend she was also his employee, she was a “special assistant” at the Erie County Clerk’s office, on his campaign payroll, and doing work for his real estate development company. Rehorik’s contribution was 15x greater than all of her previous political contributions and it is seemingly out of line with her publicly reported salary as an employee of the Erie County Clerk’s office and Friends of Chris Jacobs.

In recent weeks, Jacobs has faced criticism for accepting money, directly and indirectly, throughout his political career from Louis P. Ciminelli, his family members, and LPCiminelli. Louis P. Ciminelli and key members of LPCiminelli with close ties to Jacobs are facing federal charges in a pay-to-play scandal that has rocked Albany and Western New York. Jacobs is also at the center of a brewing scandal with LPCiminelli and the $1.3 billion reconstruction project for the Buffalo Public Schools. Jacobs served on the Buffalo Board of Education and the Joint Schools Construction Board when nearly $50 million dollars went missing or was otherwise unaccounted in the project managed by LPCiminelli.

In fact, what the FEC confirmed was that a complaint had been filed by LeBron, presumably a surrogate enlisted by someone supporting Small’s candidacy or at least opposing Jacobs’s—not that there was an investigation. This new surrogate leads this press release, which presumably is meant to appear to come from an independent, “investigative” source, with a half-truth, then piles on the allegations first aired by Stocker, then, apropos nothing that came before, tars Jacobs with another scandal-soaked association: Lou Ciminelli, currently starring in a headline near you as part of the corruption probe into Governor Andrew Cuomo’s Buffalo Billion program.

8. Two days later, the allegations are reiterated in a new press release from investigativerpt@protonmail.ch, this time in more strident language. This press release also refers to a poll of GOP voters conducted at the end of August, just before the Republican primary:

Again, Martina Rehorik worked for the clerk’s office when she and Jacobs started dating. Then she left the office, in February 2014. I asked for a copy of the poll and investigativerpt@protonmail.ch sent me part of it. It’s an unabashed push poll; whoever designed it was not nearly so interested in voters’ answers to the questions as in conveying potentially harmful information about Jacobs to likely Republican voters right before primary day. The questions suggested Jacobs might strip gun owners of their firearms, support abortion rights, and, yes, give his girlfriend a government job.

Like that push poll, the purpose of the story about the donations to Bush seems primarily to be to tell voters that Jacobs gave his girlfriend a job in his office, that she works for him even now, and that is false.

9. Both press releases are then forwarded by Small supporters to various journalists in town, myself included. And again nobody bites.

But don’t be surprised, 60th District voters, if some form of or reference to the story finds its way into your mailbox in the next week and a half. This is a far more sophisticated smear job than a cartoonish manipulation of a photograph, a pastiche of an opponent’s policy positions, or some insubstantial guilt by association. This required orchestration: a couple of surrogates, a team of people enlisted to disseminate the story once it was created…and just who was Stocker’s anonymous source, anyway, who put together so much documentation and legal references?