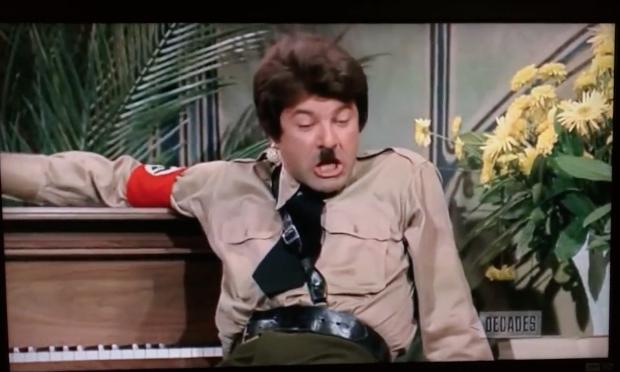 Under no circumstances should we give Michael Caputo and David DiPietro and Chris Collins what they want — a big angry mob that’s just a more diverse and inclusive version of the 2009-era Tea Party rallies. To that end, I agree wholeheartedly with what Aaron Lowinger recommend in his column — leave the rote chants and the angry righteousness (never mind the trash talk) at home.

Let them have their Dummy Nuremberg.

So, if you’re going to do it, don’t get angry — mock them. Think Mel Brooks.

“You have to bring him down with ridicule, because if you stand on a soapbox and you match him with rhetoric, you’re just as bad as he is, but if you can make people laugh at him, then you’re one up on him,” he tells Wallace. “It’s been one of my lifelong jobs — to make the world laugh at Adolf Hitler.”

Bannon isn’t funny — he’s a white nationalist proto-fascist propagandist. He was drummed out of the White House and wanted to start an alt-right anti-immigrant uprising in Europe, but was basically drummed the fuck out. That’s funny.

Bannon isn’t funny — he’s a horror. He’s a guy who embodies the central tenet of white nationalism, which is to use the accident of race as a substitute for talent, merit, and hard work. Guys like Bannon and his ilk are fundamentally pathetic, perennial failures. The whole thing is boiled down to, “I’m white — the only reason why my life is a failure is because of the [insert historically marginalized group here].” In 1938, Nazis put “Jews” in that preceding bracket. In 2018 America, these people wear red hats, claim not to be racist, and then blame women, black people, immigrants, etc. for their own Unglück.

I would take 100,000 immigrants over one Steve Bannon. Mock the shit out of him. Out of them. Think Sacha Baron Cohen. Here’s an example.

Maybe the good folks of Buffalo can troll anyone who attends. I’ll never forget the tuba players who were playing March of the Valkyries behind a bunch of white nationalists.

There will be morons at this Bannon pity party who will want to provoke counter-protesters into violence. They’re pathetic. Make fun of them. Mock them.

If anyone protests Bannon stinking up WNY, do it through mockery. Make fun of these people who think being born white in America counts as an achievement rather than an accident. #MockBannon https://t.co/sjWGcm8SaB

Listen, Aaron is right — don’t go. Don’t give them what they want. But if you’re going to go, I’m not clever enought to figure out the best ways to mock these proud boys, but let us know your ideas at #MockBannon. Don’t be an angry mob. Be a comedy flash mob.