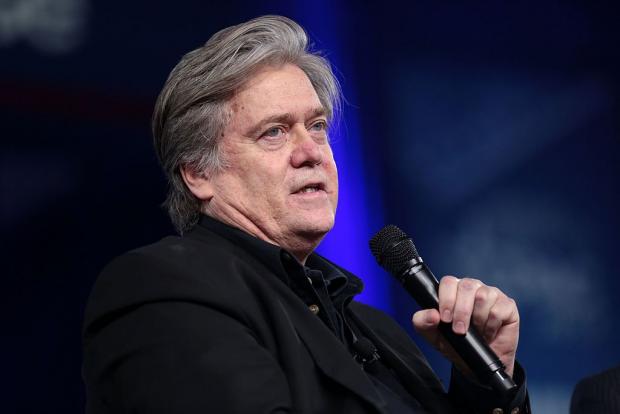 The Steve Bannon “Red Tide Rising” rally scheduled for Wednesday in Elma isn’t so much about rallying the base of the local Republican party, but in setting a stage for what party operatives all over the country are characterizing as a new angry left.

In ordinary circumstances, the local appearance of a man who mainstreamed far-right fringe groups as the editor of Breitbart—some with outright white supremacist ideologies—into a major political party should be met with vociferous pushback.

But needless to say, these are not ordinary circumstances. Don’t go for the bait.

Nouns like “mob,” “extremist,” and “socialist,” adjectives like “violent,” “radical,” and “unhinged” are routinely purveyed by operatives like the organizer of the Bannon rally, East Aurora’s Michael Caputo, who has repeatedly characterized defending Trump as a “war.”

The Democrat Mob is Attacking https://t.co/szA72p8hg3

When Democrat leaders like Maxine Waters, Hillary Clinton and Eric Holder send their signals to the mob, they’re received by all kinds of Democrats. pic.twitter.com/JvnsdlPRow

This is deranged behavior ordered by the Democrat leadership — the next assassin? https://t.co/rnzruxR7Jy

Republicans have become encouraged since the Brett Kavanaugh confirmation process that their base, namely white men, will be more motivated to vote. The partisan outrage that Kavanaugh channelled hit a note that Republicans want to sound again and again.

“It’s interesting to see that under the Brett Kavanaugh issue, it united never-Trumpers, establishment Republicans, no-vote Trump Republicans, and hardcore Trump supporters—every single one of us were under the same tent,” Caputo said during a radio appearance this month.

The hundreds of party loyalists who will show up at the Jamison Road fire hall are not the intended target of the rally. The folks they are trying to motivate are the ones sitting at home watching the TV news and getting riled up when they see throngs of loud demonstrators.

If anything close to unruliness occurs, Caputo and his ilk will milk that for all its worth in the weeks leading up to the election. They want nothing more than solid B-roll footage of black-masked “extremists” to use in TV spots.

It’s worth noting that the location of the rally is in Elma, a town without its own municipal police force, under the sole jurisdiction of the Erie County Sheriff. The sheriff,  Republican Tim Howard, happens to be a man who knows his way around political rallies that cater to white supremacists. Demonstrators showing up to protest Bannon and his company have reason not expect less than fair treatment from the security detail.

Last weekend, before a leader of the white supremacist group Proud Boys was set to speak at the Metropolitan Republican Club in Manhattan, the club was subject to vandalism. Violence broke out after the event which culminated in chants of “Kill more Nazis” and open clashes on the streets.

The Proud Boys even waited to do a group photo after the fights. They were hyped the fuck up after that. Flashing their white power hand symbol before marching towards a downtown train. pic.twitter.com/JP6jiM8Yud

These are exactly the kind of images the Erie County GOP desires, but with the rural backdrop of Elma instead of Manhattan. It hardly matters who is the aggressor, the images will be spun in theNext Wednesday’s event in the Elma Volunteer Fire Hall has the flavor of a small-time wrestling event. ”Chaos in the Cornfield.” The local GOP apparatus even has its very own provocateur in Nick Orticelli, who has been active in DiPietro’s campaign and will no doubt be trained on the demonstrators. Last year, the outspoken SAFE Act critic Orticell threatened a Sheriff Tim Howard protester to “take your ass out, too.”

These are high stakes. The ECGOP is under the very real threat of losing the safest red congressional district in the state as well as the state assembly seat held by David DiPietro. They need to appeal to the rural voters along routes 20A and 39 to convince them this all matters. Best way to do that, judging by Caputo and Collins’ tweets, is to cause a little ruckus out on a country road and broadcast that into all their homes.

Beautiful day to be out in the district talking with supporters. With 3 weeks until election day, it’s great to hear how excited folks are to head to the polls for the GOP. People are fed up with the left’s radical mobs — we must keep #NY27 red. pic.twitter.com/TQg41lzxAr

Hell, with these candidates, creating a little chaos in the cornfield is far easier than running a real campaign. Incumbent Chris Collins is a little camera shy these days, and has never had a reputation of holding a door open to constituents, to even pretend like he’s listening. He’s under felony indictment yet somehow still on the ballot in the hopes he can just squeeze through. While not accused of any crimes, East Aurora’s DiPietro’s reputation for getting around his district isn’t much better.

Republican Doug Berwanger, chairman of the Wyoming County Board of Supervisors told the Daily News Online last month that he was endorsing Democratic challenger Luke Wochensky because “he has impressed me and has made an effort to get to know what is happening in Wyoming County and with our towns. In (incumbent Assemblyman David) DiPietro’s six years in office, I can’t think of one time that he has come here to have a meeting with me or with the Board of Supervisors.” Warsaw, the seat of Wyoming County, is a mere 30 minute drive from East Aurora.

If it’s killing you that a man with ideas as abhorrent as Steve Bannon could come to town and not get a proper greeting from the other side, do the smarter thing: stay home. Start thinking about how you can help get out the vote in your own community and circles, because that’s what is keeping Nick Langworthy, Mike Caputo, Chris Collins, and David DiPietro up at night. They’re afraid of losing because they’ve hitched their wagons to fraught and corrupt ponies. Don’t provide them a distraction that could let them off the hook.

Probably a primary reason they’re bringing Bannon here — hoping to provoke a reaction they can call a “radical mob.”

Maybe the good folks of Buffalo can troll anyone who attends. I’ll never forget the tuba players who were playing March of the Valkyries behind a bunch of white nationalists.