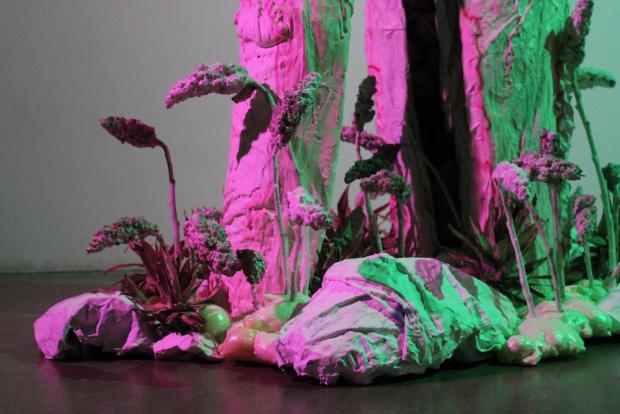 Legs Like Tree Trunks by Melanie Fisher, detail from the artist's intallation for PLAY/GROUND.
by
Geoff Kelly
/ Oct. 8, 2018 12pm EST

For the past several months, the three gallerists/curators/art entrepreneurs who partner as RESOURCE:ART—Anna Kaplan (of Anna Kaplan Contemporary), Elisabeth Samuels (of Indigo Gallery), and Emily Tucker (of Benjaman Gallery Group)—have been laboring at an ambitious project. PLAY/GROUND is weekend long art installation at the former Medina High School, comprising work by 29 artists and occupying the entire second floor and the gigantic auditorium of the decommissioned school, which is slated to be developed into market-rate apartments.

If you pine for the sort of regional art celebration that was the legendary Beyond/In Western New York series, this is for you. If you a devotee of art parties generally, this is certainly for you. If you are moved by issues related ot the creatiuve reuse and rehabilitation of historic structures, or if you have never visitied Medina’s charming main thoroughfares, or if you just like the idea of being driven from one charming place full of art to another, with cocktails and edifying company and entertainment, then this is for you.

That is to say, if you read this publication, PLAY/GROUND is for you. Get your tickets now. Kaplan, Samuels, and Tucker took time last week to answer a few questions about the event for us:

What is PLAY/GROUND? What will attendees experience?

PLAY/GROUND is a series of immersive art installations created or reimagined specifically for a former school in Medina, New York.  The title PLAY/GROUND is an homage to the former school site, as well as a suggestion of the metaphorical ground the event will cover, embracing experimentation and creative freedom. Attendees will have 29 unique experiences created by artists of all disciplines from across Western New York, New York City, and Toronto. Artists are utilizing a wide range of materials from school supplies to traditional painting to new media.

How did PLAY/GROUND come about?

Resource:Art was approached by the developer who is eventually going to transform the school into market-rate apartments. He wanted to create an impactful art event which would drive culture and visitors to his hometown of Medina.

How did you find and choose artists to participate?

Resource:Art crafted a very specific and detailed call for work which was posted on local and national sites and shared widely through our networks. We met many times to review over 100 applications from all over the country before settling on what we viewed as the most successful and appropriate proposals.

Tell us about some of the artists and their projects.

There will be so much to see and experience! Adam David Brown (Toronto) will be creating a large wall drawing that says “Shhh…” using only pink erasure as his medium.  PLAY/GROUND lit a fire under many of the artists who took on projects that have required months of preparation.

Colleen Toledano (Buffalo) was awarded one of the largest rooms of the schoolm where she is installing a huge pink foam tree with flocking surrounded by a gradient of color.

John Santomieri (Buffalo) has been growing beds of living plants, which he will transport and light inside one of the grand staircases of the school. Santomieri who works as a landscape architect for the Hotel Henry, will be using some of the herbs and vegetables from their garden in his PLAY/GROUND installation.

One of Amanda Browder’s monumental patchwork textile pieces will be the centerpiece as it takes over the former auditorium, viewable from the balcony and dramatically lit- you may remember Browder (who is based on New York) from when she wrapped the church at Richmond and West Ferry as part of the Albright-Knox Art Gallery’s Public Art Initiative.

It is important to note, some portions of PLAY/GROUND will only be on view at the Preview Party on Friday night, October 12 This is not only your first chance to see the installations, but there will be one-time performances and happenings.  It will be a party atmosphere with music, food, and a cash bar by Leonard Oakes Estate Winery. You can buy a ticket that includes a shuttle (on a school bus!) from the Hotel Henry. While the Friday night party is for adults only, the weekend is family-focused with hours 11am-5pm both Saturday and Sunday. Admission over the weekend is just $10 ($5 if you are a Hallwalls or RoCo member) and kids are admitted at no charge.

How has the space shaped the art? Are there resonances between installations and the site that have surprised you?

Before reviewing submissions, Resource:Art identified 29 unique spaces that would work well for installation. Many of the artists also visited the site before submitting their proposals and requested specific areas. We were blown away by the number of creative, ambitious, and thoughtful proposals we received. It was extremely hard to narrow down the proposals to our final selections. Seeing the artists beginning to realize their proposals in the space reaffirms our choices.

If this is a success, what’s next? Do you imagine a similar project in some new location that presents itself? Or is it something completely different?

Resource:Art plans to put on PLAY/GROUND biennially, moving to a new site for each iteration.