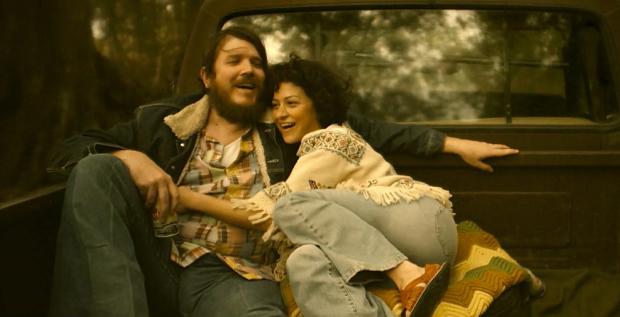 The chances that you know the legend of Blaze Foley are slim. He never attained the widespread fame he truly deserved as a great songwriter. He died, tragically, in 1989 at the age of 39 from a gunshot to the gut delivered by the son of a friend. Still, one thing is certain: Actor-director Ethan Hawke’s portrait of him in the new film Blaze will increase Foley’s audience considerably because of its touching, intimate tone and because his story is so intriguing.

We see the stumbles of an artist pursuing his muse, picking tunes out of the air while living a chill, bohemian lifestyle in a tree house with Sybil Rosen—whose memoir, Living in the Woods in a Tree: Remembering Blaze Foley was the basis for the screenplay she co-wrote with Hawke. Alia Shawkat of Arrested Development portrays Rosen with great tenderness and toughness. We also see the drunken, belligerent Foley pounding on the drums, eating up valuable studio time while ranting about Cesar Chavez with an equally hopped-up Townes Van Zandt (played with convincing coolness by musician-actor Charlie Sexton) until the sober, exasperated record producer steps away from the mixing board and charges into the studio brandishing a baseball bat.

Lead actor Ben Dickey brings Foley to life with a profound and moving performance, right down to the limp he carried throughout his life due to a bout with polio he contracted as an infant. His versions of Foley’s songs are delicate and warm, and his hillbilly drawl adds charm to all the witticisms and profound observations of his character. As its anchor, the film circles back to a storied performance Foley gave at the Austin Outhouse immediately before his death. (The Outhouse, I can tell you from personal experience, was not the most prestigious venue in Austin. I believe my band split $40 five ways at the end of one gig there in the early 1990s.) But it was there that Foley recorded the four-track Blaze Foley: Live at the Austin Outhouse—which stands as about the only example of the artist singing the songs he wrote. Early in the film, he delivers a monologue from the stage, musing on the nature of songs, and how they exist like stars or like babies, suddenly there, where before there was nothing. This is shortly before he steps off stage to confront a loudmouth talking on the bar pay phone as he’s trying to record.

The film is also an exploration of the nature of fame. Foley, who was born Michael David Fuller in Malvern, Arkansas, went through a couple of possible stage names before settling on Blaze, a more incendiary version of famous country singer Red Foley’s moniker. His ambition may have been sabotaged by the kind of drunken and erratic behavior that made him a pariah to club owners, and an increasing pain in the ass to Rosen. While out on the road playing rinky-dink honkytonks with all the distractions and trivial temptations that lifestyle entails, he found himself a million miles away from the idyllic tree house where their love took root. The path toward fame can be a cold and lonely one, probably not well suited to a fiercely talented but painfully insecure artist with a drinking problem.

In one scene, Foley has hitchhiked with Rosen to meet his sister at the facility where his alcoholic father (played with profound grace by Kris Kristofferson) is housed with dementia. As Foley and his sister sing him a gospel hymn, his father’s face is flooded with bittersweet memories of a past he threw away in favor of the cheap wine he would drink in the parking lots of various churches as his wife and children sang to the congregation in order to put food on the table.

“I don’t want to be a star. I wants to be a legend,” Foley confides to Rosen, early in the film. “Stars burn out because they shine for themselves. Legends last forever. Legends stand for something—something that matters.” Foley’s greatest professional success during his lifetime was with his song “If I Could Only Fly,” which was covered as a duet by Merle Haggard and Willie Nelson, and again by Haggard as the title track to his 2000 album of the same name.

Now, nearly 30 years after his death, Foley’s star is shining more brightly and his legend is continuing to grow thanks to Blaze. The film opens on Friday at the Amherst Theater.  There will be a special preview screening on Wednesday, September 26 at 7pm with an introduction by Hamburg, New York born singer/songwriter/producer Gurf Morlix, a longtime friend of Foley who appears in the film and has done much to burnish his legend, including releasing a fine collection of his songs in 2011 entitled Blaze Foley’s 113th Wet Dream.