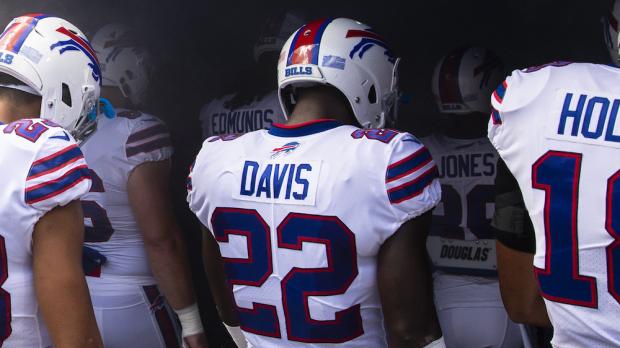 Vontae Davis was not the only one who quit on the Buffalo Bills on Sunday.

As the veteran cornerback—Buffalo’s highest-profile free-agent acquisition of the offseason—was deciding to call it a career at halftime, thousands of Bills fans streamed out of the gates at New Era Field and back into the parking lots they had departed a couple of hours before.

This is no knock on the refugees fleeing a dismal Opening Day performance by the home team. The We Want Marangi coverage team joined in the exodus after unanimously deciding there was not a reason to continue baking in the hot sun searing the lower bowl of the scoreboard end of the stadium while watching a game that was effectively over well before intermission.

The day started more optimistically. The home opener amounts to the NFL’s version of Christmas Day—a new season ahead and all the hope that comes with, even if 2018 started in horrific fashion a week earlier in Baltimore.

The weather did nothing to shade the good feelings that abounded as Tracy, Josh, Amy, and I navigated a maze of driveways, parking lots and orange cones to find friends parked near Erie Community College. Blue skies dotted by wispy clouds and a sun that was warm, but not yet searing, along with a light breeze, combined for a perfect pre-gaming atmosphere.

Whether the Erie County Sheriff Department’s fresh bans on table smashing and glass bottles were aggressively enforced remains unclear. At the least, we did not see any of the prohibited items near our spot or on the way in to the stadium. Nothing but easy-up tents, cans of beer, Zubasz stripes, and cornhole competitions as far as the eye could see.

The midweek announcement that rookie Josh Allen would replace the thoroughly helpless Nathan Peterman as Buffalo’s starting quarterback made it easier to forget about the Ravens’ 47-3 decimation of the Bills. Allen’s debut made it easy to convince yourself that the change could lift the rest of the team, which no longer had to labor under the knowledge that no matter what else they did right, Peterman’s ineptitude guaranteed that it would soon go terribly wrong.

As it turned out, these Bills proved more than capable of getting soundly whupped without any contribution whatsoever from No. 2.

Things started off well enough, with Davis stopping Melvin Gordon a yard short of the first-down marker after the Chargers running back caught a two-yard pass from Phillip Rivers on third-and-three.

The game was two minutes and five seconds old. The crowd, much of it standing, roared. It would be the last time that sound was heard in Orchard Park all day. It would also be the final occasion on which the Bills stopped Rivers or Gordon when it still made a difference.

Rivers took over from there, slicing up Buffalo’s defense on a three-play, 38-yard drive set up by a penalty on Buffalo’s punting team. The short trip to the end zone ended with Rivers throwing a laser to Mike William’s in the back of the end zone. Trailing in coverage on the play—Vontae Davis.

The two-time Pro Bowler has not said whether that was the moment when he decided he wasn’t having much fun anymore. If not, it may have been following another three-and-out by Buffalo and another precise possession from the Chargers.

After Rivers converted a third-and-12 with a 17-yard connection with William’s, Davis followed a Los Angeles receiver to the opposite side of the field. Gordon cut back and raced through the suddenly Bills-free portion of the field for a 20-yard touchdown and a 14-0 lead. With 4:24 to go in the first quarter.

There’s no way to really tell whether Davis messed up, or just properly executed a poorly designed defensive scheme.

There is evidence supporting the latter, since Rivers directed two more long touchdown drives, sandwiched around a field goal by Steven Houschka. That Buffalo drive would have also ended in a punt, if not for a dumb third-down unnecessary roughness flag on the Chargers.

In all, Rivers completed all but one of the 16 throws he made in the first half, piling up 178 yards and connecting with Gordon for two more touchdowns.

Rivers made it look so easy, Buffalo head coach Sean McDermott yanked defensive play-calling duties from defensive coordinator Leslie Frazier at the half. At press time, it was unclear whether McDermott made the decision before or after Davis walked away. The Buffalo locker room could not have been a comfortable workplace environment, in any event.

By that point, the WWM team relocated to endure the second half in the air-conditioned comfort of The Towne House on South Park, where we met up with Tracy’s cousins Amanda and Danielle and friend Katie, who provided more entertainment than had the Bill’s through the first two quarters.

Whether due our change of venue, the coaching alteration, anger and betrayal felt by Davis’s suddenly former  defensive mates (veteran linebacker Lorenzo Alexander called the departure “completely disgraceful”), or the Chargers showing some mercy on their hapless foes, the Bills started more closely resembling a professional football team in the second half.

The defense held Los Angeles to a field goal. Allen guided the Bill’s to their first touchdown of the season, more than six quarters into the 2018 campaign. He added his first professional passing touchdown, a three-yard toss to Kelvin Benjamin with 38 seconds remaining that set the final score at Chargers 31, Bills 20.

While that’s an improvement on 47-3, the performance gives little reason for hope heading into a brutal two-week stretch in which the Bills visit the Vikings in Minneapolis and the Packers in Green Bay.

With a depleted secondary and no sign of a pass rush until Sunday’s game was out of hand, it is tough to imagine Kirk Cousins and Aaron Rodgers not torturing the Bills in the same fashion as Rivers. Buffalo’s offensive line was pitiful, with Allen absorbing five sacks and getting pressured on two ugly interceptions. LeSean McCoy got knocked out of the game when his own center was driven into the backfield and dumped on top of him.

So barring a major upset (Minnesota is an early 16.5-point favorite, making the Bills the league’s biggest underdog do far this season) returning home to face Tennessee on Oct.ober 7 at 0-4 is suddenly looking very likely.

For a franchise that teased its fanbase with the first playoff appearance of the millennium less than nine months ago, the main concern will be less about keeping them in the stadium for a whole game than getting them to enter in the first place.