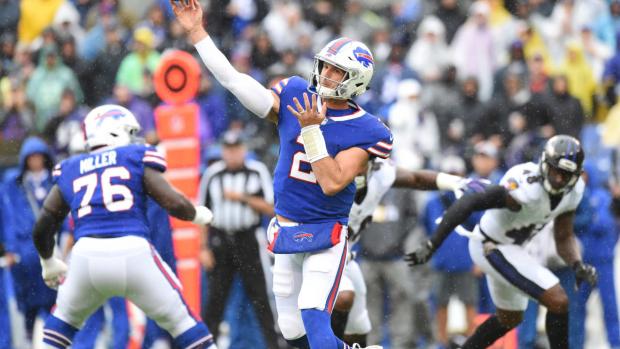 You would think, at this point, there is one thing we could all agree upon:

Nathan Peterman has absolutely no business playing quarterback in the National Football League ever again.

Even after the most disastrous Opening Day start by a quarterback in the Bills’ 59 seasons, Sean McDermott refused to concede that the Peterman Experiment, which required the Buffalo coach to jettison two experienced, relatively competent quarterbacks, is a complete and utter failure.

“When you look at the tape, I’ve been through it a couple times already, we all have to do our job better,” McDermott told reporters a day after Baltimore humiliated everyone affiliated with the Bills by a deceptively close score of 47-3 on Sunday. “We can go around the team, in all three phases we didn’t play well enough to win the football game.”

Come on, Sean. Even if your defense and special teams had played like Super Bowl champions (note: they did not), kidding yourself into thinking your pet project could direct your offense at even a below-average level cost your team any chance at winning on Sunday.

As he did in his first career start at San Diego, which previously ranked as the indisputably worst decision in McDermott’s brief tenure, Peterman looked thoroughly lost throughout. He missed short throws, he missed throws downfield. Sometimes he didn’t find receivers at all, wandering around until the Ravens swarmed him.

The numbers were as hideous as the aesthetics. Eighteen throws. Five completions, all so short they netted a total of 24 yards, a stunningly putrid 1.3 yards per attempt—which does not take into account the three sacks Peterman absorbed. The Bills did not achieve a single first down for the entire first half.

By intermission, the crowd gathered at the 33 Speakeasy Grill in Cheektowaga, the We Want Marangi coverage teams vantage point for the opener, had reached the final stage of sports-fan grieving: smart-assery.

“Man, good thing they got rid of that Tyrod [Taylor] guy!” said a 40ish man in a LeSean McCoy jersey and Bills hat, just two quarters into a brand-new season. “Gonna be a loooong season.”

Especially if Peterman takes another snap. Add up his numbers, perform the requisite division and multiplication, and you wind up with a passer rating of 0.0.

At one point before McDermott finally faced reality and replaced him with first-round draft pick Josh Allen, Peterman threw an incompletion that somehow improved his passer rating—from 1.7 to 4.9. By way of comparison, Alex Smith (then of Kansas City) led the NFL with a rating of 104.7 last season. Peterman’s predecessor, Tyrod Taylor, got run out of Western New York after finishing at 89.2. And, you know, helping the Bills reach the playoffs for the first time since the 1999 season.

Peterman did show improvement over his meltdown in Los Angeles, where he launched a surreal five interceptions in 14 first-half attempts. In Baltimore, he managed to avoid throwing one to a guy wearing the wrong uniform until 5:50 remained in the first half.

What an interception it was, though. He did show some arm strength for one of the few times in his Buffalo career, his panicky throw clearing a cluster of receivers and defenders by 10 yards. Unfortunately, Ravens safety Tony Jefferson was there waiting at Buffalo’s 44 and returned the easy pick 15 yards to set up a field goal that made it 20-0, effectively ending the competitive portion of the game.

In reality, this one was lost the moment McDermott named Peterman the starter.

Yes, Baltimore, like the Chargers, has a violently stingy defense. And, yes, to call Buffalo’s offensive line patchwork is an insult to quilts.

But Pro Football Focus, a site that analyzes all phases of the game, ranked Buffalo’s pass protection eighth among the 26 teams that played Sunday, suggesting that Peterman deserves full credit for his incompetence.

Still, McDermott saw enough somewhere—or was worried enough about seeing Allen get dismembered—to send Peterman out there for the second half with his team down 27-0.

Three minutes and 38 seconds later, Baltimore’s Brandon Carr grabbed another poor throw in the general direction of Kelvin Benjamin and took it to within a yard of the goal line. One play later, it was 40-0.

As the CBS telecast went to a commercial break after the extra point, analyst Rich Gannon said, with disbelieving sadness, “We’ve still got 25 minutes left to play.”

Mercifully, Peterman did not. Allen took over and looked like, well, a rookie making his professional debut. Yet he showed flashes of why the Bills traded up twice to land him—arm strength and touch, mobility and an awareness of what goes on around him that Peterman totally lacks.

New offensive coordinator Brian Daboll and quarterbacks coach David Culley spent the offseason and summer trying to rebuild Peterman’s game and psyche. The goal was to prove the Chargers debacle was a one-off fluke, that McDermott didn’t throw away a fifth-round pick when allowed to run Buffalo’s 2016 draft before the hiring of Brandon Beane as general manager.

It turned out that it was a complete waste of time. Peterman took first-team snaps in practices and consumed exhibition-game time that could have been used to get Allen ready to start from the jump.

As The Public goes to press, McDermott could still do the right thing. Not only name Allen the starter for Sunday’s home opener against the same Chargers that have likely started in Peterman’s nightmares for the past 10 months, but also end the poor guy’s misery (and everyone else’s) and send him off to seek his life’s work.

A free agent off the street would have to go a long way to look worse than Peterman, should something happen to Allen.

But that would require McDermott admitting that he’s been wrong, something of which very few football coaches—or humans in general, for that matter—are humanly capable.

It’s more likely that he keeps Peterman around as Allen’s backup, or, God help us all, gives Nate one more shot.

After all, he does have more experience starting against the Chargers.