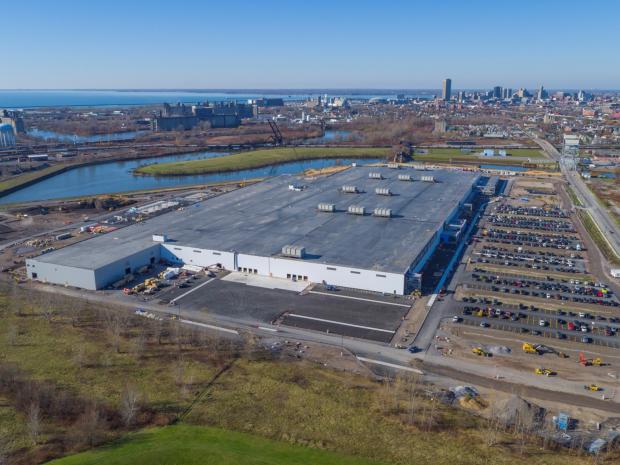 Some manufacturing has begun, but public investment at Riverbend continues to be a gamble

Tesla CEO Elon Musk was bullish about Buffalo on a call with investors last month.

“We made that commitment to the state of New York,” he said, describing the company’s promises of job creation at a huge factory opening in Buffalo that was built at taxpayer expense. “We are going to keep that commitment.”

In late 2015, though—before SolarCity was bought by Tesla—the contract that governs the company’s commitment to New York was tweaked to give it more ways out of the deal if its business goes south.

Added to the list of reasons SolarCity could end the contract and walk away: broad language about changes in government policy or regulation—at the local, state, or federal level—that would damage the company’s business.

“There certainly is an argument that this change makes it easier for Tesla to pull the plug and walk away,” said Eric Talley, a professor of contract law at Columbia University in New York City. The the change represented a “moderate risk” to taxpayers, he added.

“If I were to put it on a scale from one to 10, it think it’s probably below a five, but maybe above a three, from a standpoint of taxpayers’ interest,” he said.

New York State has spent three quarters of a billion dollars on the factory; SolarCity, in turn, is on the hook for 1,460 jobs in Buffalo and thousands more statewide.

“I wouldn’t call myself alarmed at the change, but it is worrisome,” said Sam Magavern, an attorney and executive director of the Partnership for the Public Good, a local good government group.

SolarCity and state officials refused to explain the reason for the expanded terms or otherwise to discuss details of the contract.

The revised contract terms came during a volatile time for SolarCity. The company had been hemorrhaging jobs and money before it was bought by Tesla last November. Its two co-founders resigned soon afterward.

And the company has shifted gears on its plans for the Buffalo factory, striking a deal with Panasonic, which will make solar components that Tesla will buy.

Production in Buffalo began at the end of August, more than a year later than originally planned.

It will start slowly and “ramp up exponentially over time,” a Tesla spokesperson said.

The facility, billed as the largest solar panel factory in the Western Hemisphere, stood empty for months after it was completed. The project was tainted by the indictment last year of top state officials and executives at the local construction company chosen to build it.

Despite the merger with Tesla, which some observers criticized as a “bailout” of SolarCity, its future remains uncertain, amidst a slowdown in the residential solar market, the looming expiration of a federal tax credit for solar installations, and the Trump administration’s ambivalence towards renewable energy.

The state’s plan to make Buffalo into a solar manufacturing hub has changed dramatically since it was first conceived more than four years ago.

What began as a $225 million investment in a factory for two startups, high-efficiency light manufacturer Soraa and solar panel company Silevo, more than tripled once Silevo was bought by SolarCity in 2014. The size of the planned facility, in turn, increased to 1.2 million square feet. With no space left for Soraa, that company shifted its operations to the Syracuse area.

Despite the changes, though, the basic terms of the deal have stayed the same. New York agreed to spend $750 million on building the factory and buying equipment; in exchange, SolarCity promised to hire a total of 5,000 employees statewide over the next 10 years. Roughly two-thirds of those jobs come with financial penalties attached: Any year the company fails to meet its hiring goals, it has to pay the state a penalty of $41.2 million, for up to 10 years.

Even so, New York’s bet on SolarCity is considered risky because it’s not structured like a typical economic development deal. Many of the state’s subsidy programs are paid out incrementally, year by year. A company paying reduced property taxes in exchange for creating jobs, for example, would receive the savings gradually as it increased hiring—not upfront. When it comes to SolarCity, though, New York has already spent the money. Now taxpayers are waiting for the company to hold up its end of the bargain.

State officials argue that, since New York owns the building and some of the equipment, taxpayers are protected. If SolarCity doesn’t make good on its promises, they say, the state could offer the factory to another company. Experts caution this would likely require another round of subsidies and more state spending, since the factory was custom built for SolarCity.

The terms of the deal between New York State and Silevo—later SolarCity, now Tesla—have been updated 11 times so far.

One of those changes, made in October 2015, adds to the section of the contract dealing with “force majeure”—a legal principle that would excuse the company’s failure to meet its contractual obligations because of unforeseeable events: hurricanes, earthquakes, terrorist attacks.

“As a general rule, if a force majeure occurs, then both parties’ obligations are essentially excused going forward, and the contract dies right there,” said Talley, the Columbia law professor.

In SolarCity’s contract, however, new cpnditions were added to the force majeure clause: changes in federal, state, or municipal policy that “materially and adversely” affect the company’s business. Those changes, the amendment says, could include “significant increases in tariffs or duties” on the equipment needed to run the factory.

The contract amendment also says any change in policy would have to “materially and adversely” affect the company’s businesses. And it makes clear that the effects wouldn’t need to be limited to SolarCity, but could include “its parent corporation and affiliates.”

While Tesla, with its electric car and battery businesses, is more vulnerable to regulatory and policy changes than SolarCity was by itself, the company’s size balances out the risk, because any policy change would have to be more significant to “materially” harm it, Talley said.

In theory, if Tesla invoked the force majeure clause and abandoned the Buffalo factory, it would be up to a judge to decide whether the event in question qualified. In practice, though, legal experts agree it’s more likely that any disagreement would be negotiated in private.

When it comes to policy changes that could damage SolarCity’s business, there’s no shortage of candidates on the horizon.

Across the country, traditional utilities are pushing for an end to policies that offer customers financial incentives to go solar. A particular target has been “net metering,” which lets homeowners sell excess energy generated by their solar systems back to the grid. Over the past four years, four states have begun to phase out net metering.

A federal tax credit on solar panels is set to decrease in 2020, before expiring altogether in 2022.

The Trump administration’s ambivalence towards renewables adds another layer of uncertainty. Trump has proposed slashing funding for the renewable energy division of the Department of Energy and appointed a noted critic of renewables to lead it. In June, Musk resigned from a White House advisory council after Trump announced that the US would withdraw from the Paris climate accord.

And after years of record growth, the residential solar market is slowing down. In 2016, three of the five residential markets that account for the bulk of residential solar installations, experience  the slowest growth on record, according to a report by GTM Research, which analyzes the renewable energy industry.

Even if changes in policy did damage the company, the broader force majeure clause isn’t exactly a “get out of jail free card” for SolarCity.

There’s a curious line in the section of the contract that lays out the timeline for the company’s job commitments, saying that the terms and conditions of that section will live on even if the contract is terminated. By one reading, that means New York could argue that SolarCity would have to make payments for missing these milestones—$41.2 million a year, for 10 years—even if the contract was terminated by invoking force majeure.

“That’s an argument that New York State could make in court, it’s not a crazy argument to make,” Talley said.

Late last year, plans for the Buffalo factory changed again when Tesla announced that it would partner with Panasonic. Tesla will let Panasonic use part of the factory to make solar panels and cells and, in turn, will buy much of what Panasonic produces.

That means most of the early hiring will be done by Panasonic, not Tesla. Yet another change to the contract established that Panasonic’s employees will count towards Tesla’s job commitments with the state. Panasonic has agreed to use “commercially reasonable efforts” to hire Buffalo residents for those jobs, according to the agreement between the two companies.

Charlotte Keith is a reporter for Investigative Post, a nonprofit investigative reporting center focused on topic of interest to Western New York and its residents.