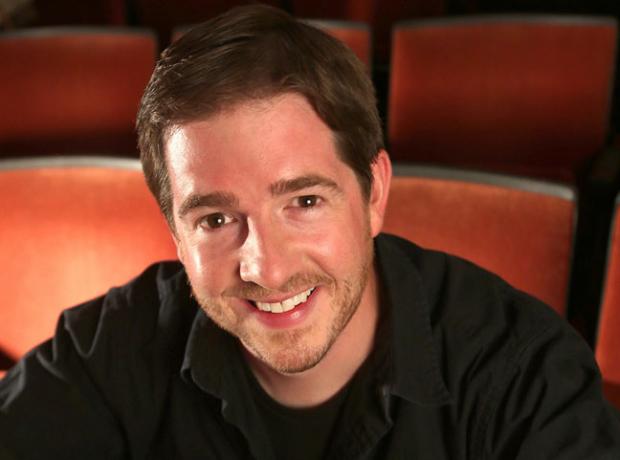 Brian Mysliwy is preparing now for Fully Committed even though opening night at Andrews Theatre is six months away.
by
Thomas Dooney
/ Sep. 16, 2015 12am EST

Wise theater instructors remind artists-in-training, those prone to elaborating their scenes with gags, tricks, gimmicks, and imitations of other actors, “Just tell the story.” The actor’s job is to tell a story.

Actors who appear solo in one-man or one-woman shows are rather like the Ancient Mariner of Coleridge’s poem. The soloist invites the audiences to the world of the play. Then, unaided, guides the tour through the sights and sensations to be had before steering them back home. And a solo actor must personally engage each member of the audience at every moment.

Buffalo theater has seen a number of successful solo performances ranging from the historic, to the fantastical, to the original scripting of the author-star. The coming theater season invites us to three such productions that feature three different actors.

The three scripts and the three productions are marked by some common points. On the showbiz side, none of these actors has ever before attempted a one-actor showcase—a distinctive challenge to even the most veteran talents. By coincidence, the character in each of these plays is an actor…or an out-of-work actor. And in each, the twists and turns of a life in the theater have led to the events of the play.

First out of the gate, Kurt Erb solos in Buffalo United Artists’ production of Buyer & Cellar, a celebrity-studded saga which opens for Curtain Up! He plays Alex More, an out-of-work actor who, to keep body and soul together between acting jobs, works in Barbra Streisand’s basement. There Alex keeps tabs on La Streisand’s various collections. Of what, you ask? Of costumes (her own and of others), classic and contemporary ceramics, early American folk art, paintings and photographs of gallery quality, Art Deco fixtures, Oriental rugs, Native American baskets, and more. While Alex More is a creation of playwright Jonathan Tollin’s imagination, Bab’s self-styled museum and the collection it houses are real.

Erb observes, “I think this story exists as a really juicy bit of gossip. Picture it…you’re at a party and you meet someone works in Barbra Streisand’s basement. You demand to hear all the details. It’s told to you, and you hear hints of voices from different characters, but you’re able to use your imagination to picture what they look like, what the basement looks like.”

Erb believes there will be a special relationship between a lone actor and a roomful of theatergoers that will stimulate Buyer & Cellar. “One actor doing it all involves the audience because they fill in the rest of the world,” he says.

However, he says, “Going up on a line and not knowing what’s next feels like standing on the tracks with a train coming right at you. It’s scary not having another actor out there with you onstage. On the other hand, being alone onstage also means no distractions while performing. You alone control the arc of the story and if you lose your way, you can re-enter the story as you need to.”

Brian Mysliwy is preparing now for Fully Committed even though opening night at Andrews Theatre is six months away. “I have about a third of the script down already,” he says cautiously. “To help, I record myself reading the script, and listen to it as I drive to and from work every day. It helps me a lot to get it in my brain.”

Mysliwy will be familiar to fans of Irish Classical Theatre for his energetic appearance there in La Bête and A Servant of Two Masters.

Fully Committed is a one-man farce by Becky Mode. For an hour or so we will watch Mysliwy on the job at a popular New York City restaurant taking reservations from demanding diners. “In the show, I play 40 different people, both men and women. Each one of those characters has to be distinct, crystal clear, fully formed, and real. Having one actor play all the parts adds to the frantic and ridiculous world of the script. So, in addition to meeting all the crazy people who populate the show, you get to see one actor navigate between all of those different personas…”

Facing such material, Mysliwy finds inspiration from comedians who stretched the boundaries of stand-up into a more theatrical forms. “Probably my biggest influence for this show has been studying footage of Jonathan Winters, who was absolutely brilliant. He could change personas in the blink of an eye. Usually a very strange person, but real in his—or her—own unique way…and he did it with just his voice, his face, his body, and, most importantly, his attitude.”

He is intent on putting down his script as soon as possible. “I’ll be fully off-book and rock-solid on the lines for quite a while before rehearsals start, and that way I am able to jump into the rehearsals and just have fun playing around, and not have to worry about ‘the work.’”

His wife, Jennifer, also an actor, helps him review lines. “I’ll return the favor when Jen performs in Company with O’Connell And Company later in the season.”

While Erb and Mysliwy have license to create their fictional characters with a measure of freedom, Heather Fangsrud must respect real life, playing the historic, title character in The Last Reading of Charlotte Cushman. Never heard of Cushman, the celebrated American actress and a savvy theatrical manager? This is one reason why Caroline Gage wrote this script and Fangsrud will perform for the company she co-founded, Brazen Faced Varlets.

Gage has written a number of scripts about historic (or legendary) women but corrects the stories to be seen by way of a stronger, feminist gaze. Cushman was famous for playing breeches parts, roles in which women played men. In the Shakespearean canon alone she covered Hamlet, Cardinal Wolsey in Henry VIII, and Romeo, notably playing opposite her own sister, Susan Cushman, as Juliet.

Heather Fangsrud  says, “Charlotte Cushman is a complex woman, and I want to do both her and the playwright justice.” Playwright Gage presents Cushman at a dilemma moment in her career. Despite public acclaim, critics and fans suspected Cushman to be a lesbian. They were right. She was offered the controversial role of the prostitute Nancy in Charles Dickens’ audience favorite Oliver Twist. Cushman would be damned if she took the role and damned if she turned it down. If she took the role she would be accepting scandal. She would be putting her head in the lion’s mouth of her detractors who could then snicker that she was not feminine enough for the part. She would also lose the chance to be part of a moneymaking hit.

How Cushman brought this chapter in her life to resolution weighs on Fangsrud, personally, as an actress and as a theater organizer. Her partner in founding Varlets, Lara Habersberger, will direct the show. “We both know the way the other works and the challenges that are involved. We’ve discussed doing a one-woman show for a while. Lara’s clearly going to be intimately involved with the process and I trust her skills and ability to make this project memorable and engaging.”

Fangsrud says she will not be entirely alone in this solo show. “I think this particular show does have a roster of characters, to some degree. As Charlotte, I will play a number of the different roles she performed throughout her lifetime in theatre.”

Perhaps it is more than a coincidence that the characters in these three particular solo shows are actors…even out of work actors. An actor is only an actor if there is an audience. The actor-character in a one-person-show provided with an audience is made real and thus saved from obscurity. Novelist Joan Didion once said, “We tell stories to save our lives.” The same can be said for the characters in one-person shows, as well as the tellers of those stories. Saviors of stories, each in their own respective right.