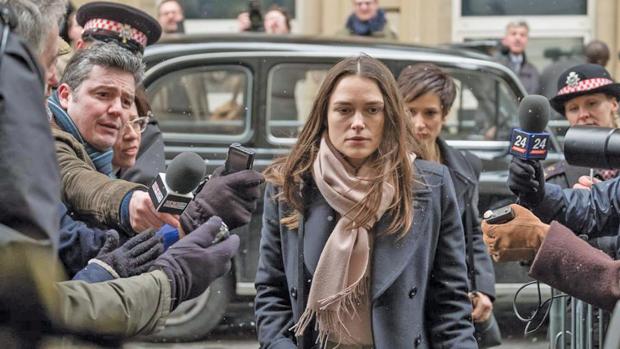 In an era when the political scene brings new outrages with the regularity of a ticking clock, it’s worth remembering—or, if you’re young enough, learning—that this behavior isn’t exactly new. There’s just so much more of it, conducted with shameless brazenness. But it wasn’t that long ago that we went to war on the basis of a bald-faced lie: that Saddam Hussein was in possession of weapons of mass destruction.

Part of the mechanism by which that fabrication was sold to the world is illustrated in the new British drama Official Secrets. Keira Knightley stars as Katharine Gun, who in early 2003 was a translator working for GCHQ, the surveillance center for Britain’s intelligence agencies. Her job was listening to wiretaps of Chinese subjects and reporting on the ones that might be of interest, a job that did not cause her to lose any sleep.

In the weeks leading up to the launch of the invasion of Iraq, an email arrived in her in box (and those of other staff) that did give her pause: a chief of staff from America’s NSA was asking her department for help compiling information that could be used to blackmail UN diplomats who might be planning to vote against the resolution the US was seeking in support of the war. It was worded with only slightly more tact that that summary, and for Gun, who was already upset at watching Tony Blair spin out the half truths that earned him the nickname “Bush’s poodle,” it was going too far. She decided to leak the memo to a friend who had journalistic connections.

Contemporary American audiences who may not recognize Gun’s name will not be in suspense as to the outcome of her actions: the war proceeded. The price she paid for being a whistleblower is what keeps the drama lively, and even though the story ends somewhat anticlimactically, it maintains a slow burn of outrage right to the very end.

Working from a script by Sara and Gregory Bernstein that made the rounds for years before appearing on the “Black List” of the industry’s best unmade screenplays, director Gavin Hood handles its multiple threads smoothly. A large portion of its running time is devoted to showing how carefully the Observer, the paper that broke the story (despite otherwise having supported the call to war) vetted it. It’s a story to be angry about, but Hood (who also directed the excellent Eye in the Sky) handles it coolly, in a thorough manner that should appeal to any fair-minded viewer. A cast of familiar British faces—Ralph Fiennes, Matt Smith, Rhys Ifans, Matthew Goode, Tamsin Greig—is on hand to attract viewers who may not otherwise go in for “political” material, but in the end they’re just icing on the cake. Now playing at the Dipson Amherst Theater.

You would have to have painfully limited taste in music to watch all of the new documentary Linda Ronstadt: The Sound of My Voice without finding a song that appealed to you. One of the most popular singers of the post-Beatles era, Ronstadt not only tackled a wide variety of styles, but did them all spectacularly well: folk, rock, country, standards, operetta, canciones—no matter how far she strayed from the public’s previous perception of her, she made every new genre her own. This CNN production offers no revelations or exposes any skeletons, and skips from her late 1980s peak to her retirement in 2009 (after Parkinson’s took away her once flawless pitch) as if she did nothing in those last two decades. Maybe the filmmakers assumed that her fans wouldn’t sit still for any more than 95 minutes of her, a decision I think most would disagree with. Now showing at the Dipson Eastern Hills and North Park Theaters.