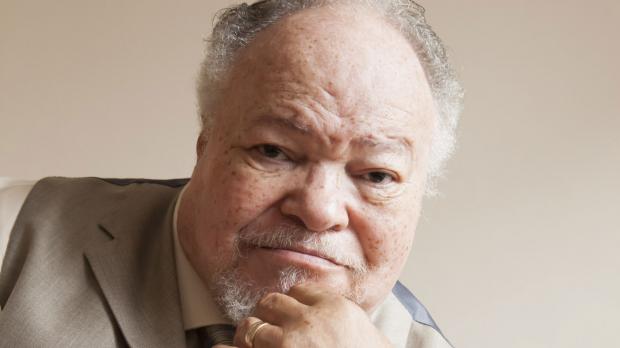 On Monday evening, September 11, Buffalo’s Curtain Up! week kicked off with a celebration of one of the local theater community’s finest ambassadors: Stephen McKinley Henderson. The veteran stage and screen actor, who taught acting at the University at Buffalo for 30 years, was honored with a star in the Theatre District’s Plaza of Stars in front of 710 Main Theatre. Henderson’s acting career outside of Buffalo has garnered numerous awards and nominations, including a Tony nomination for the 2011 production of August Wilson’s Fences, in which he starred alongside Denzel Washington and Viola Davis. Henderson spared some time recently to talk with The Public by phone about the recognition, his career, and the Buffalo theater community.

Tell us what you’re working on right now.

I’m currently on Broadway in A Doll’s House Part 2. We took over from Laurie Metcalfe and Chris Cooper and Condola Rashad and Jayne Houdyshell, who’s still with us. It’s a four-character piece. We got a very nice response for our cast from the New York Times and other places, so we’re very happy.

What are you getting out of that play as an actor?

Lucas Hnath’s play is a wonderful piece of theater. It owes its title to the Ibsen classic: It takes place 15 years after A Doll’s House, when Nora left the home, but Hnath has written it with an ear to our time, and to the timeless subject of relationships between men and women, and marriage and divorce, and the whole nine. It’s a wonderful piece of writing, and that’s what there is for the actors working on it. I play Torvald Helmer, and it’s a real joy.

What has it meant for you as an artist to be so closely associated with August Wilson’s work? What is that relationship like, between an actor and the work of a particular playwright?

As an African American, August Wilson’s work means an awful lot personally and culturally. He’s an incredible poet playwright. He tells stories that are very human but from the particular position of African-American culture. But they speak to everyone. I can remember playing at the National Theatre in Great Britain, doing Jitney, and how many people would come from every walk of life, every culture, every country, and say, “Oh, that’s my uncle” or “That reminds me of my neighbor.” Because August wrote so specifically from our culture, but he wrote quite universally about what it is to be human and under circumstances that are challenging.

Being with him and traveling with him with several of his plays, three of them, it was a dream come true. I’ve had a few things that I’ve really wanted to do. When I was young, I really wanted to meet Muhammad Ali. And I got a chance to do that: I directed a play about his life and I got to spend some time with the Champ. And then, when Wilson’s plays began to present themselves, I remember seeing Joe Turner’s Come and Gone and saying to myself, “Oh, my god, I really want to work with that playwright on his work,” and then I got a chance to do that with him personally. There are things about having worked with August while he was writing—being in rehearsal and coming back with new pages and so forth. That’s always really a joy. It’s always great to be with playwright in rehearsal as he’s crafting a play.

And I also wanted to be a film with Denzel Washington. And I got to do two plays with him on Broadway and finally the film of Fences. So my cup runneth over.

Well, yes. But, you know, the great playwrights—take, for example, Lorraine Hansberry. She wrote A Raisin in the Sun  in the 1950s, and it found its audience. The great writers find their audiences because their audiences are human. If you’ve written a play with any depth, then people who love literature find a way to it. James Baldwin is a great novelist—black, white, or whatever. The level of craft finds its way.

Talk about the relationship between doing and teaching—about being a performer on stage and on the screen, and teaching students who hope to do the same.

The great advantage I have had as a teacher is that I had great teachers. I’ve been really fortunate along the way to have worked with some really fabulous teachers and directors. The classroom becomes a real playground and a laboratory at the same time. The students bring so much. When you see a  young artist who has the same dreams as you had in your head, and you know that the greatest thing you can do is to challenge them—to be able to continue to do that is quite a blessing.

I teach at the Juilliard School here in New York in the spring semester. I’m invited to do a master class, and have for the last five or six years. That’s a real kick because I went to school there. I recently delivered the commencement address and received the great honor of an honorary doctorate from the Juilliard School this past May. In delivering that commencement address I went through in my head the wonderful experiences I’ve had with great teachers. I got to work with the great Lloyd Richards, who was dean of the Yale School of Drama and artistic director of the Eugene O’Neill Playwright Center, and also artistic director of the Yale Repertory Company. The years I spent with Lloyd have been very useful to me and a treasure. I studied with Bill Esper, who headed the Rutgers Mason Gross Graduate School  of Performing Arts, studying the Meisner approach to acting. That’s been very  beneficial. I had a wonderful teacher in high school, Gloria Terrell, who really did inspire me. I was in Kansas City, Kansas, and that seemed a long way from New York. But she encouraged me and worked with me on my auditions, which was how I was able to get into the Juilliard School. I had great teachers at the North Carolina School of the Arts and at Purdue University. Along the road you run into these wonderful, dedicated, mission-oriented educators, and they plant seeds. The great joy of teaching is that you get to plant those seeds. And not just with students who go into theater. There are so many things in theater that inspire people to go into law and all kinds of other walks of life—and also to support the arts. It’s so important that we have people who support the arts, who understand and appreciate them deeply. It’s been a wonderful life in that way.

You’ve been a part of Buffalo’s cultural community for 30 years, since you joined the faculty at UB. You’ve won pretty much all the local awards available to an artist in your field. You and productions you’ve been part of have won or been nominated for the most prestigious honors there are in the bigger world outside Western New York. What does this one mean to you?

I actually started there in 1981 as an actor. I joined the UB faculty in 1987. So Buffalo theater is a very important stage in my career.

The years when I worked at Studio Arena when it existed were terrific. And the colleagues I had at UB: the great Saul Elkin, and Anna Kay France, as well as Vincent O’Neill. Just to have colleagues likme that, who you get to share lunches and chats in the hallway with—it’s a great environment. I knew the gentleman, Michael Pitek, who started the Curtain Up! tradition in Buffalo—I’d worked with him previously in St. Louis. There are a lot of people who came to Buffalo thinking they would be there a short time and, like myself, ended up staying 30 years.

I was welcomed to Buffalo. The first production I did there, which Saul Elkin directed, was a production of Antigone with Lorna Hill and a group of legendary local actors—world-class artists who simply lived in Buffalo. It means a lot to me to be acknowledged alongside some of the wonderful artists who made an impact on Buffalo’s cultural community and others who were simply from there and are now in the larger arena. It’s hard to express just how much it means to me personally to be accepted by the artists and the arts community there.

In those 30 years, how did you see the local theater scene evolve?

It was at a pretty high mark when I came there. There is a long tradition of shows that would try out out of town and then go to New York, and Buffalo was one of those cities. I’ve seen so many theaters grow. I was sorry about the demise of Studio Arena, but that gave rise to other wonderful theaters. There are so many: Buffalo United Artists, the Road Less Traveled, the Irish Classical. The Kavinoky, David Lamb’s theater, has grown; it was in no small order when I came there, but it definitely has grown. Saul has built beyond Shakespeare in Delaware Park; he’s built the Jewish Rep. There’s the Buffalo Laboratory Theatre out in Hamburg that does unique work. The Paul Robeson, Ujima Theater, Alleyway Theater—I could go on and on. I’m not trying to leave out any, these are just the ones I’ve had personal connection to. The New Phoenix—I haven’t worked there but I’ve been a very happy audience member. I’ve had a wonderful time as an audience member in Buffalo, seeing the wide range of work produced there, from the classics to the most modern and contemporary works. The Buffalo community is fortunate to have the breadth of work that goes on there.

What’s next on your docket? You mentioned an audition the day before this interview.

You know, I never talk about things until they’re actually realized. But I am proud to be a part of Greta Gerwig’s first feature film that she’s written and directed, with Laurie Metcalf and Saoirse Ronan. It’s part of the Toronto Film Festival. A film called Lady Bird—the trailer is out and you can watch it online. I think it’s a beautiful film.

What are your unfulfilled ambitions? What would you like to do that you haven’t done?

It’s interesting. There are these experiences that come your way that you can’t possibly see coming. Opportunities like this one, doing A Doll’s House Part 2. When they come, you feel so fortunate to be a part of it, to have been thought of by the artists who request your presence. I just hope to have more of those surprises. It’s not so much that I have a list of things I’d like to do, except to keep doing the work as long as I can at the level that I can.