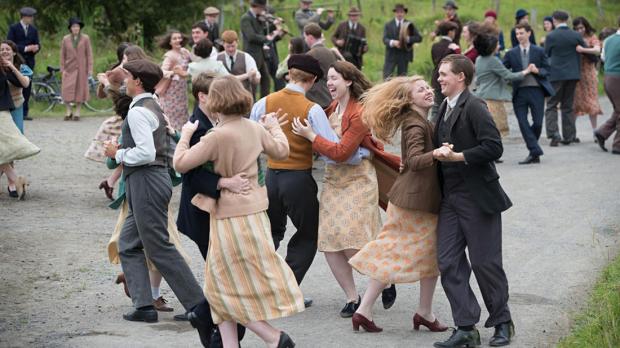 A personal note: Several years ago I was assigned to review a Ken Loach film set in Scotland, among the lumpen proletariat, as others of his have been. It seemed to be about a youth who enters into some very shady transactions to earn enough money to buy a house trailer so his soon-to-emerge-from-prison mother and he can live together. I say “seemed” because the Scottish accents of the actors made it all but impossible for me to understand much of the dialogue. I gave up finally. An editor said, only partly ironically, that some of Loach’s pictures should have subtitles.

There’s no such problem with Loach’s newest one, Jimmy’s Hall, a warmly toned tribute to a 1930s Irish political leader. Jimmy Grafton (Barry Ward) is a fiercely populist agitator who goes up against the traditional, repressive Irish political and social forces in County Leitrim in the midst of the severe international depression of the period.

Returning from a decade-long stay in New York, Jimmy decides to play jazz records and teach dancing in an abandoned community hall. Soon, the programs there include poetry readings and boxing lessons. And, crucially, forums with land-reform advocates. Jimmy has unintentionally put himself on a collision course with powerful, disapproving figures and institutions, especially the Church. A local priest, Father Sheridan (Jim Norton), believes the Church should manage education, broadly and formally.

As no one very familiar with Loach’s work will be surprised to find, the movie’s depiction of Father Sheridan and the Roman Church is not sympathetic. The picture sees them as colluding with both capital and the state to supervise people’s lives. But this isn’t just rigidly polemical. Loach allows the priest his sincerity, even as he draws him as harmful to the community’s ordinary people.

Jimmy’s Hall is a gentler, more poignant addition to Loach’s large body of movies devoted to those who suffer and those who resist.