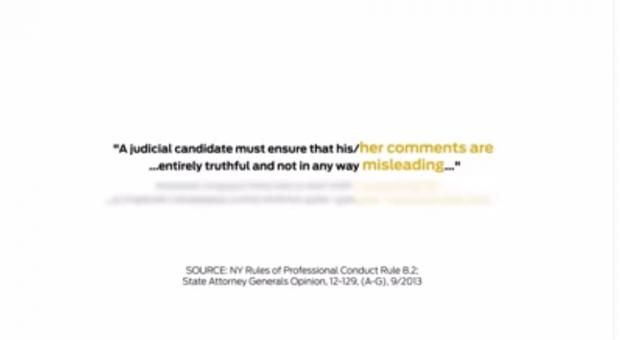 People loyal to embattled political operative Steve Pigeon are running the Michele Brown for Family Court campaign. People who worked on the campaign, but don’t want to be identified, say that strategy is being directed by former Deputy Mayor Steve Casey and Chris Collins’s chief of staff, Chris Grant. Brown’s campaign aired and shared this ad starting Friday:

That ad was promoted on Facebook, but has been hidden from Brown’s campaign page’s timeline.

It is illegal and unethical for judicial candidates to do negative ads or attack each other. Here, Brown accuses Brinkworth of going negative, so she figured she’d air a negative ad slamming her opponent for her negative ad!

It’s very effective if you’re paying scant attention to this somewhat obscure race. Brown attacks Brinkworth’s character on the basis of non-existent negativity, and did so late enough in the game to make it difficult for Brinkworth to respond.

The party committee, Zellner said, was not bound by judicial restrictions and the party organization can essentially say whatever it wants.

“This commercial is false on its face, and that’s a direct violation of the rules for judicial campaigns,” he said. “It should immediately be taken down.”

Asked if he should be bound by the same ethical considerations, Zellner said he is “allowed to point out what I think are the facts.”

“My concern is that Kelly had nothing to do with this mailer,” he said.

But the Brown campaign late Saturday said Zellner has mistakenly interpreted the rules governing judicial elections. Joseph G. Makowski, the campaign’s legal adviser, said Zellner and the county committee initiated the negative tone with mailings and electronic communications. He said Brinkworth is responsible for ensuring that supporters such as the county committee that endorsed her follows the same rules.

“Simply put, in a judicial race no candidate or supporter can launch a negative campaign,” Makowski said. “That’s exactly what Jeremy Zellner has done and the Brown campaign was entitled to respond under the rules.”

Here is the section of the code to which Makowski is referring: “(e) may respond to personal attacks or attacks on the candidate’s record as long as the response does not violate subparagraphs 100.5(A)(4)(a) and (d).”

(4) A judge or a non-judge who is a candidate for public election to judicial office:

(a) shall maintain the dignity appropriate to judicial office and act in a manner consistent with the impartiality, integrity and independence of the judiciary, and shall encourage members of the candidate’s family to adhere to the same standards of political conduct in support of the candidate as apply to the candidate;

(i) make pledges or promises of conduct in office that are inconsistent with the impartial performance of the adjudicative duties of the office;

(ii) with respect to cases, controversies or issues that are likely to come before the court, make commitments that are inconsistent with the impartial performance of the adjudicative duties of the office;

(iii) knowingly make any false statement or misrepresent the identity, qualifications, current position or other fact concerning the candidate or an opponent;

How is attacking Brinkworth a response to a “personal attack” or an attack on Brown’s record? It’s not—and neither Brinkworth nor her campaign ever attacked anyone. This is a cheap trick that flaunts the rules of judicial ethics.

This is a typical example of the Steve Pigeon playbook, part of which is to blatantly disregard the rules everyone else follows. If Brown wins on Thursday, Republican Brenda Freedman will go on to defeat her in November. As usual, Pigeonism results in creating havoc in the primary election, then losing the general election. As long as candidate’s checks to the right people clear, results don’t matter. Then Pigeon can accuse the Democratic establishment of incompetency and demand its removal. Rinse, repeat.