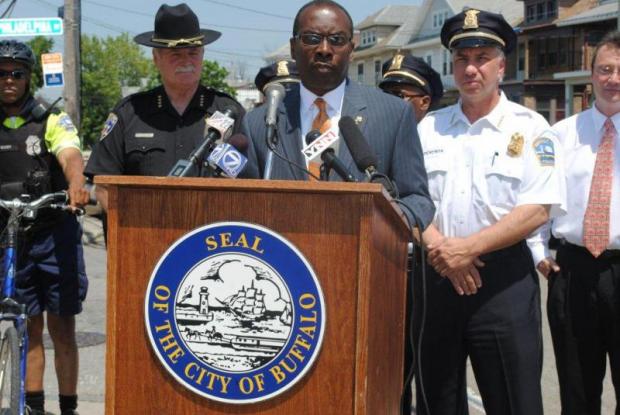 Citizens, social justice advocates and attorneys stood in front of City Hall to announce a pair of legal actions they are taking against the Buffalo Police Department in an effort to push back against discriminatory and retaliatory practices.

Anjana Malhotra, a University at Buffalo law professor, filed a lawsuit on behalf of a woman who claims she was targeted by police after speaking out publicly against police vehicle checkpoints, and submitted a complaint to state Attorney General Eric Schneiderman’s office outlining data that demonstrates widespread discriminatory practices by the department on behalf of the Buffalo chapter of Black Lives Matter.

Acour Dour, a Black Lives Matter member, said that while Mayor Byron Brown and police leadership have worked to portray a department that has a good relationship with the community, many living in the city’s poorest neighborhoods have had a different experience.

“It is far past time that Commissioner (Daniel) Derenda, Mayor Brown and the Common Council stop with these feel good news articles that attempt to portray the BPD as noble heroes and finally address the very real and very glaring police problem we do have here in Buffalo,” Dour said.

A spokesperson for Schneiderman declined to comment on the complaint, but pointed out that the office has two open investigations into the deaths of Wardel “Meech” Davis and Jose Hernandez-Rossy, both of whom died during interactions with BPD officers.

Included in the complaint to the attorney general is a report—the result of more than two years of research conducted by Malhotra and UB and Cornell law students under her supervision—that shows a department that disproportionately targets and arrests people of color, using constitutionally dubious practices, including vehicle checkpoints and stop-and-frisk style detentions.

“The Fourth Amendment guarantees that everyone has a right to be free of unreasonable seizures. It’s a guarantee,” Malhotra said. “BPD does not get to choose, based on race, who gets that guarantee and who doesn’t.”

The actions come just tone week before the primary elections, where Mayor Byron Brown is seeking a fourth term. His two major competitors in the Democratic primary, city Comptroller Mark Schroeder and Erie County Legislator Betty Jean Grant, have both called into question the mayor’s handling of police community issues, with Grant, who threatens to pull votes from Brown’s East Side base, making the most vociferous calls for police reform.

Mike DeGeorge, a spokesman for both Brown and the police department, did not immediately respond to a call seeking comment Tuesday evening.