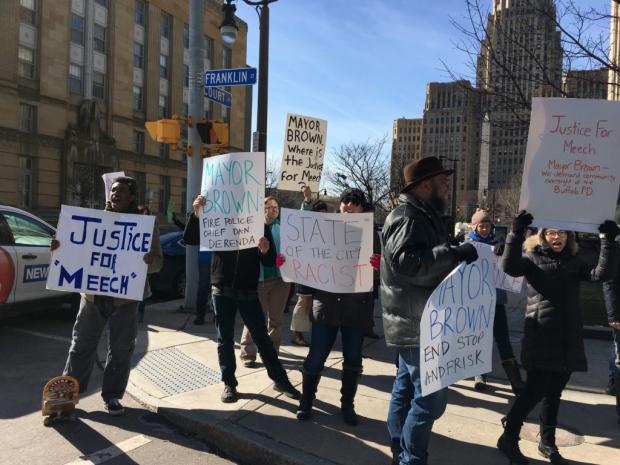 The Buffalo Police Department are the subject of an extensive complaint filed with the New York State attorney general’s office last week that alleges the police engage in routine constitutional and civil rights violations. Anchored by the local chapter of Black Lives Matter, the group behind the complaint has also concurrently filed a federal lawsuit for retaliation by the BPD after a citizen spoke to a TV reporter about checkpoints in her front of her East Side home.

The two-year study into the policies and procedures was undertaken by clinics at the SUNY Buffalo and Cornell University law schools, spearheaded by UB law professor Anjana Malhotra. The findings of the report are particularly damning for Mayor Byron Brown, whose signature “Zero Tolerance” policing policy researchers found at the heart of the BPD’s alleged pattern of Fourth Amendment violations, as well as the overpolicing of BMHA properties and racial discrimination within police practice.

The BPD have “engaged in a repeated, persistent and widespread pattern of unconstitutional policing, one which has specifically and disproportionately targeted people of color,” the letter to Attorney General Eric Schneiderman reads. ”These tactics, directed in predominantly minority areas, have unnecessarily funneled thousands into the criminal justice system. Additionally, the City and all oversight agencies have abdicated their responsibilities to hold individual officers accountable for systematic misconduct, thereby allowing habitual offenders to stay on the police force without sanction.” The complaint finds fault with the BPD’s lack of performance evaluations and its current lack of accreditation with the state.

A major focal point of the research into the Buffalo Police has been its use of daily traffic checkpoints. In June, a woman working with Taniqua Simmons on her outsider campaign for mayor appeared on Spectrum TV news complaining about the implementation of checkpoints in front of the home of Dorothea Franklin in a segment entitled “Are Buffalo Police Check Points Targeting the East Side?” Two weeks after LaMonica Peters’ report aired, police did another checkpoint in front of her house, this time writing four code violations to her property in the process. Franklin took photos and videos of the Strike Force officers at that time.

A few weeks later, police returned to another address that Franklin owns, claiming that her adult son was a person of interest in a hit-and-run although according to the lawsuit, his vehicle clearly didn’t match the description of the suspect’s. Police performed a search warrant at her home and seized only her phone. Her son went to police for questioning and to provide alibi and has not been charged with any crime. Police have still not returned Franklin’s phone.

The group has announced a 4pm press conference at City Hall this afternoon (Tuesday).

The office of Eric Schneiderman has active investigations into the deaths of Wardel Davis and Jose Hernandez-Rossy. The manner of Davis’s death faces the possibility that officers violated the Fourth Amendment in arresting Davis to begin with. Our reporting has shown that the two officers involved in Davis’s death had singled out the property as a possible “new drug house” a week before the incident, but city 311 records, usually a dependable metric of a property’s drug activity, has shown no such complaints. Hernandez-Rossy was shot in the back as he fled police unarmed after a traffic stop last May.

Just last week, Erie County District Attorney John Flynn announced charges against Buffalo Police officer Joseph Hassett for assaulting a prisoner in central booking. The charges only arose after the DA’s office discovered the tape of incident and shared with the BPD months later. In June of 2016, two police officers witnessed the assault of another central booking prisoner, Shaun Porter, and did not report that incident. Those officers remain on the force and the DA told reporters last week it was his understanding those officers remain under federal investigation. An FBI spokesperson declined to comment whether any investigation was currently active regarding the two officers, Joshua T. Craig and Anthony J. D’Agostino.