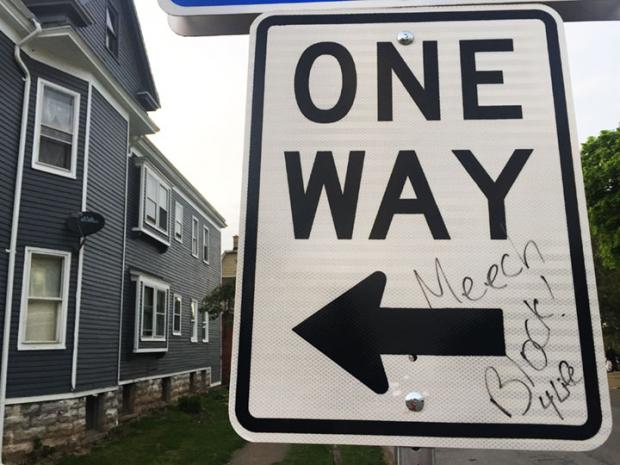 A street sign on the corner of 88 Arnold Street, where the memorial to Meech Davis still stands.
by
Aaron Lowinger
/ May. 31, 2017 12am EST

There have been three central questions surrounding the February 7 death of Wardel “Meech” Davis in police custody: Why was he stopped, what happened after he was stopped, and how did he die. The answer to the manner of his death appears to have been answered by the Erie County Medical Examiner: a homicide complicated by Meech’s pre-existing asthma and bronchitis.

An answer to the first question of why police became involved at all with Davis on that winter night has become clearer according to new information.

According to documents obtained by The Public, Meech was seen coming out of a house that had become targeted by B District police. In a Buffalo Police Department detail car report filed by officers Todd McAlister and Nicholas Parisi and dated February 1, the officers wrote that they received “information that 19 Hoyt Street is a new drug house that has both crack and heroin.”

The same report also indicates that a property across the street at 88 Arnold was “one of the new drug spots.” Both properties are just over the dividing line of West Ferry Street in BPD’s D District, yet it was B District officers Parisi and McAlister who filed the report on February 1, and who stopped Davis nearly a week later coming out of 19 Hoyt Street.

The Public obtained the B District detail car reports from January 1, 2017 through the night of Meech’s death through a Freedom of Information law request. The report filed by Parisi and McAlister differs from the other reports in that it is the only detail car report filed by the pair—there are several other repeat officers—and it is the only detail car report that reads like a narcotics intelligence report. The bulk of the other reports describe the detail car as providing support to areas in the wake of violent crimes or burglaries, serving warrants, and providing extra security and crowd control in the aftermath of large events downtown. Reports of patrolling a neighborhood after several homicides are mixed in with officers letting off elderly drivers with warnings for traffic infractions.

When police claimed in the aftermath of Meech’s death that he was seen coming out of a “known drug house” in a “known drug area,” both phrases used by police sources to local media in this case, this is appears to be part of the evidence that supports that claim.

However, according to the attorney representing the family of Meech Davis, Steve Cohen, 19 Hoyt was never a drug house. Cohen claims to have interviewed every tenant in the property and the closest he came to finding drug use was a “couple of college kids” who “smoked weed.” Cohen claims that in the house lived a disabled person whom Davis would help with simple chores.

And according to the city’s litmus test of troubled properties, its 311 call bank, 19 Hoyt was not an issue. The 311 hotline is a broad “one-stop” city services phone service. A city official with knowledge of the city’s 311 hotline told The Public that “if a property is a known drug house, there would be pages of complaints in 311 about it.” Yet there were no such complaints lodged against 19 Hoyt in recent years. The only calls about 19 Hoyt since 2009 were for a garbage tote issue in 2014 and an anonymous tip in September 2009 that 19 Hoyt was being used as a stash house for local drug dealers when they felt a police raid was imminent, according to documents made available to The Public.

By contrast, 88 Arnold had two drug-related complaints in the six months prior to Meech’s death. There are, of course, “known drug houses” in the city, but those houses, according to the city official, incur multiple 311 complaints every year, generating requests for police and housing inspection follow-up.

The Buffalo News has reported that in the “last 10 years” there had been “250-plus police visits” to 19 Hoyt Street, but never clarified how many of those visits, if any, had taken place in the recent past. The house was last sold in 2015 to DP Real Estate Associates of NY, a limited liability corporation that receives its mail at a New York City address.

In that same report, the News stated that “the house Davis was seen leaving was well-known to police as a place where officers were frequently called.” If it was so well known, why are Parisi and McAlister referring to it as a “new” drug house less than one week prior?

That same News report says that Parisi arrested Davis twice in the year preceding year, once with McAlister for drugs, and once without McAlister for stolen property and drugs. There have been no reports of Meech having drugs on him the night he died, or drugs contributing in any way to his death.

In the past six months, The Public has reviewed two no-knock warrants signed by Buffalo City Court judges, one which led to a dead pet, a possible police shooting in Kaisertown, and a near fatal car chase involving a school bus during rush hour. Both warrants for marijuana dealing were extraordinarily vague in their descriptions of the subjects in question. The Kaisertown warrant netted fewer than 25 grams of marijuana and a tiny amount of cocaine; the other warrant yielded nothing, according to the family involved.

Among the evidence that contributes  to such warrants being requested by police and granted by a judge: 311 calls and patrol reports like Parisi and McAlister’s.

Buffalo B District Detail Car Reports by aalowinger on Scribd