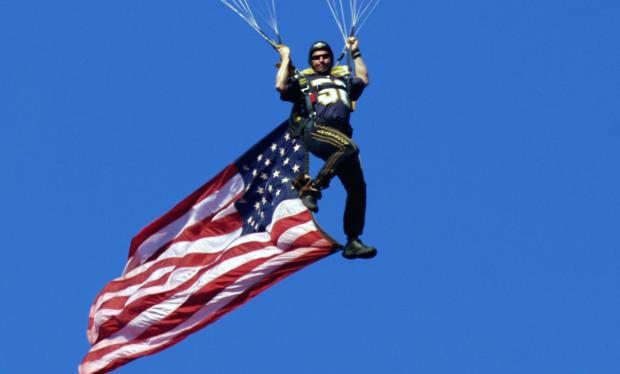 I got yelled at in 11th grade. I remained sitting at my desk during the pledge of allegiance. I had never done the pledge—I was brought up Jehovah’s Witness—but always stood silently hands at my side according to doctrinal protocol. All teachers respected this form of protest with varying degrees of tolerance. Refusing to stand was me adding my own flair: to hell with everyone at once. Anyway this Vietnam vet gov’t teacher pulled me out of class and gave me his “what the flag means to me” speech. While having his importune finger jabbed in my face, I didn’t doubt the feeling with which he spoke but nonetheless blushed at the incongruity of the situation.

I wasn’t savvy enough to respond with my own “this is what the flag means to me” speech, and the incident felt a little imbalanced—combat vet dressing down a kid torn between the demands of his family/community, the state and his own blossoming sense of political economy. At this time, I had no Marxism (a fault attributable to this very teacher’s bland presentation of ‘government’) and was still in the thrall of the social contract (i.e. individualistic) theory of society. I couldn’t articulate the depth of my sense of ‘fuck you’ much beyond the whispered words ‘fuck you.’ Echt response of one on the wrong side of the social contract.

I’m no Antigone, and, in any case, the instance was just one of many embarrassing encounters which typify the high school experience, but allow me a momentary indulgence: to relate the authoritarian liberalism represented in my teacher, the deep illiberalism of JW doctrine, and the point beyond which that illiberalism would not go—and to which I wanted to bring it, and to which I wish to bring it now.

Your average Jehovah’s Witness—s/he doesn’t exist outside of averageness (some may think this an insult; it’s an insult to think so)—believes that the material world is illusory insofar as its existence depends on the non-judgement of God; once He decides to bring the world to its final glorious cataclysm, the illusion will emerge in its falseness. There will be a reckoning. Meantime, one must participate in the reality of the material world inasmuch it sustains the viability of one and one’s family. JWs, like Marxists, ground politics in this very materiality but with different results. Provisionally, the spontaneously awakened judgement of God corresponds to the spontaneously awakened class-consciousness of the proletariat. But, in the JW weltanshauung, it makes no sense to revolt, organize, vote, advocate for political change, or celebrate holidays (i.e. recognize that if the materiality of the world is illusory, then there can be no proper respite from said materiality). This is the core of JW illiberalism. Let it be said that JWs regard cultural progressivism in the same light as material progressivism. Keep your head down and wait patiently for the end of the Satanic order.

JWs falter where it matters. Every sermon I heard (I heard a couple thousand from ages 0-17) on the immateriality of the world inevitably stalled at “pay back Caesar’s things to Caesar.” Mark 12:17 formed the red line: pay your taxes; don’t sink to criminality; respect imperial law despite its obvious injustice. The Satanic order was to be acknowledged insofar as it was understood to be transient. Paradox: its transient materiality was to be understood as immaterial and obliging. One has to lie to live.

For one wishing to question the legibility of such a doctrine, the issue at hand is Caesar’s ‘things’. Are they police killing defenseless blacks? Are they executive fiat blowing up weddings via drone? Are they CIA-funded terrorist organizations beheading children? Are they generally the mechanisms of power trampling the will of the people? At what point does one, even symbolically, push back? At what point does the material world—from a spiritual standpoint—become intolerable? This last is the question which drove me from the fold.

The other question—that of the source of ‘complete amazement’—depends on how we choose to formulate our response—if in fact we choose to go beyond the false immediacy forced upon us and respect the revelation of our senses. Why were Christ’s followers astonished (beyond the beyond-thinking of even the Platonic order) at his injunction? The simple answer is that they rightfully believed his appearance in the world ought to have ended it—ought to have brought about something better. So, they were astonished to find themselves caught up in an apolitical death cult.

Having been raised in a death cult myself, I can attest to its unpleasantness. It forms in the body from birth and appears as a lifelong bodily affliction. An incompleteness of self; death in life; incapacity for love. However, it’s important to not discard the radicalism which is the true legacy of Christ. Consider the lilies of the field.

Flag-worship is disbelief in God. It is the deepest form of blasphemy. It is pagan in the extreme. It’s a Moses/Aaron thing. Yet it remains a shibboleth for liberals. Is this because there exists something like humane patriotism? No, it’s because liberals are, to their genealogical core, vile capitalists whose last resort is flag-waving. They don’t even believe in their own jerry-rigged law. They believe—in a discussion of religion one should let that verb sink in—that empire is beneficent. They shamelessly trot out the disfigured shells of soldiers to bolster this claim. Without a uniform a soldier is just another one of their victims. So, it disheartens me to see a conscientious football guy dissed by pretend-crisis-having-scolds who’ve apparently never had a severe moral dilemma in their lives.

The first dream I remember: I was standing in Kindergarten during the pledge, suddenly all my classmates started chanting “shame” (my name is Shane) while I stood frozen in (what else) terror. And they completely marveled at him. As much as JW doctrine wants to cordon off politics from experience it can’t. To doomily affirm one’s own impotence is a joyless political project. Here I place myself in an uncomfortable position contra Our Lord. Jesus, imperfect as he was, was forced, by the unfortunate circumstances of his ancestry, to divest himself of his true revolutionary potential. He had to remain—even as the throngs of his subsequent followers demurred—apolitical. Yet, in line with Christ’s dictates, the Roman Empire fell.