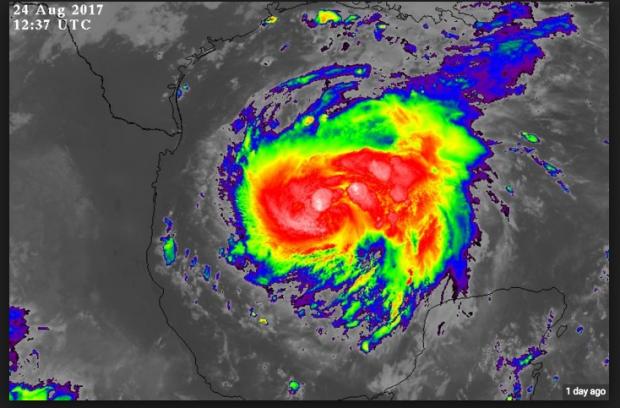 For any of you that are worried about this storm, Hurricane Harvey, hold on to your pants. Its going to be a wild ride and modesty may not be permitted.

Harvey is the most powerful storm to hit the U.S. in 12 years.  It is expected to stall out over the Texas coastline. It will severely impact rural, urban, and industrial land and seascapes.  It is forecast to dump waters on these vulnerable regions for up to seven days and seven nights.  In some areas over 50 inches of rain is forecast. Late this Friday afternoon, the National Weather Service issued a statement that says in part “Some areas could be uninhabitable for months.”

Houston, Corpus Christie, and Lake Charles are in deep trouble. New Orleans, to the east of the current forecasted hurricane track is expected to receive almost 10 inches of rain. Couple this all with a storm surge expected to exceed 12 feet, and well, you get the picture.

Todays Frightening Friday GreenWatch column is not a weather report.  It is a disaster preparedness column. We have a lot coming our way.

Those of you that are regular readers of GreenWatch may note that I sometimes refer to Naomi Klein.  Her books about disaster capitalism such as The Shock Doctrine and No is Not Enough, do add color to my world.

Disaster Capitalism is defined as economic practices characterized by policies such as privatization of public goods and services, labor and wage reductions, human rights invasions, elimination of rules and regulations, and the promotion of autocratic governance. Disaster Capitalism seeks to  transfer massive amounts of shared public wealth into private hands, thus stimulating private profit. It is argued that private interests are more efficient and effective than public overseers.

Disaster Capitalism comes from the concept that in order to get the public to agree to what are very egregious and overt acts of the seizure of power and wealth, a shock has to occur. In order to scare the public into acceptance.

Shocks come in many forms.  Natural disasters can trigger upheaval and unrest. We saw a Disaster Capitalist response to Hurricane Katrina and we can witness today and in the coming days and weeks, minute by minute, how our culture is responding to Hurricane Harvey.

Shocks can also come in the form of war, rebellion, and other politically inspired and deliberate disruption. The more serious the shock, the easier it is to control public reaction while our pockets are looted by the oligarchs in charge. Often these shocking events and resultant conditions co-exist or are planned to coincide. That is why these next weeks will count. Maybe these will be the most significant weeks in American History.

There is a Disaster Capitalist playbook. This growing and multi-dimensional playbook is created and managed by the neoliberal class of Oligarchs that are President Trumps wealthy base. It is not a playbook based on incompetence, chance, or luck. It is a deliberate game plan.

Trump is the prototypical Disaster Capitalist. He has risen to power with the support of the class of global oligarchs. He is in their clutches. They do however need shocks.  Providence or climate change are bringing them the gift of  Hurricane Harvey.  This is an opportunity to trigger a role-out to a response that may put American people, especially people of color, people of poverty, and people that struggle existentially outside of the economic system, at risk.  Another way to phrase it is that the role out may put generations in chains.  As in the “chains of slavery” to the oligarchs.

Will this hurricane be enough to keep Trump in power?  Probably not.  This writer says that we have more shocks, much more to come. We think Trump will try to run the table in order to keep himself in power. Everything is fair game.

On the heels of Hurricane Harvey comes a most serious threat to a stable civilization. This is the Trump promised government shutdown on September 30. Trump belligerently declares that this country needs a damned good shutdown and that he will see that it happens unless Congress fully funds his multi-billion dollar racist/nationalist/disaster wall by the Sept 30 deadline.  Trump is demanding that the American taxpayer, you and I, pay for this wall. Hell we arent even paying attention to the North Korea nuclear war scenario boasted through the dystrumpian bugle horns!

What does a US Government shutdown mean?  Nothing less than a global economic destabilization due in part to US defaults on bonds.  Destabilization allows kleptocracy, and kleptocracy is what keeps the oligarchs in business. This will allow Disaster Capitalists to march into the worlds capitals and countrysides to carry off bags of money in order to “fix” the mess.

The good news is, uh, President Trump has been known to lie. He is a blustering blunderbuss. He may not be able to force a government shutdown other than in the annals of his own mind. I suggest that in this case, maybe that can be looked upon as a good thing?

ALL THE PRESIDENTS MEN

Reality acquaints us with the fact that the Trump administration is full of wealthy disaster capitalists and other enforcer type thugs. We have written about many of these people and their associations with kleptocracy. We wil work to continue to expose this squalid band of thieves, reprobates, and future convicted criminals. We will keep our focus on individuals including Wilber Ross, Secretary of Commerce, Tom Price, Secretary of Health, Scott Pruitt, EPA Administrator,  Rex Tillerson, Secretary of State, Sonny Perdue, Secretary of Agriculture, Carl Icahn, who until last week, special economic advisor to the President, in-charge of making his own company more valuable, Jarod, and Betsy DeVoss, Secretary of Education and her powerful mercenary brother, Erik Prince, founder of Blackwater, private prisons advocate, and who seeks to build the largest overt mercenary army ever funded by the United States.

Let us for the moment focus on Vice-President and perhaps President-in-waiting, Mike Pence. Many people think of him has the adult in the room.  He may seem to be more stable, but it might be more accurate to think of him as the Manchurian Candidate, especially in this air of confusion and misdirection that has been built by the White House leadership teams since Trump was elected. Sure Steve Bannon seems to be kept at arms length from the President by General Kelly, but with his reemergence at Breitbart, is influence is not all that diminished. Trump heavily relies on Breitbart, Info Wars, and occasionally Fox News, for the truth.

Many Republican leaders are now openly looking towards a Pence presidency so that the relations between Congress and the President can become more productive. Whether this will stand the test of the upcoming shocks is yet to be determined, but there are some disaster capitalist relationships that are deeply tied to Pence. He has been a good soldier, while Trump has been little more than a wildcard that for the moment has come out on top. This writer thinks that all that a Pence Presidency will usher in is a more orderly transfer of the public weath to the disaster capitalists and oligarchs.

The rise of neoliberalism has had a hard working soldier in Mike Pence. He has long championed the idea of shrinking government to the size of a bathtub so that it can be easily drowned. This scary scenario presupposes that government will act more efficiently if controlled by boardrooms of the private sector whose only purpose is profit. Remember that as of January of 2017, only 8 individuals control over half of the world’s wealth.

Mike Pence was swept into Congress on the tails of former House Speaker Newt Gingrich’s Contract on America. This was Gingrich’s plan to redefine the mission of America.  It came in service to the private sector and was in opposition to things like environmental and safety regulations, human rights, labor rights, and a wide variety of social services including access to health and education. And it worked. It ushered in the great Republican Revolution of 1996 which saw Republicans, notably very conservative Republicans, gain a majority in Congress for the first time since 1954.  This was a time that saw the initial surge of the now resurgent Jack Kempian, trickle-down, austerity theology that is still carried like an ever brightening tiki-torch by white nationalists, the KKK, and their benefactor Oligarchs. Pence was a beneficiary of that revolution when he was first elected to Congress in 2001.

By 2005 Pence was a rising star. He then served as the Chair of the House Republican Study Committee, an ideological group that made and continues to make conservative white male biased proposals about how to invade women’s health issues, tax reduction for the wealthy, privatized education and other public services, and as a response to Hurricane Katrina issued a report that according to Naomi Klein contained “32 pseudo relief polices, right out of the disaster capitalism handbook”.

“What stands out”, notes Klein, “is the commitment to wage all out war on labor standards and the public sphere, which is bitterly ironic because the failure of public infrastructure is what turned Katrina into a human catastrophe in the first place”.

Now as we watch this growing storm rip into the Gulf Coast, we must also be vigilant and aware of what tune Trump and his oligarchs across the world are going to call this week.  It may involve  hearing more about Erik Prince soon. And not about him going to jail.  This could happen even before Trump exercises his threat to shut down the Government on September 30. You know, unless Congress authorizes the American taxpayers to pay for his $20 billion Mexican Wall.

Meanwhile compassionate thoughts and love goes out from here to all those that will suffer from the effects of Hurrican Harvey.

Naomi Klein Explains NO IS NOT ENOUGH