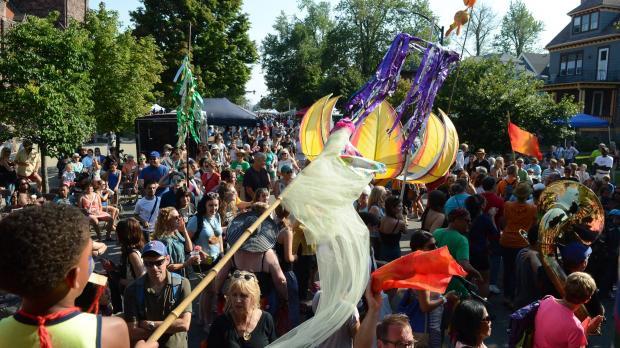 Spotlight: Elmwood Festival of the Arts

The Elmwood Festival of the Arts turns 18 years old this weekend—old enough to vote. And it’s not difficult to imagine what kind of voter the festival might be, if it were a person rather than the collective of people that it actually is: the founders and organizers, the hundreds of volunteers, the artists and performers, and the tens of thousands who attend each year.

It’s not difficult to imagine because the festival has grown along exactly the paths its founders imagined for it, lo those many years ago. I interviewed a handful of the founders then, in July 2000, the month before the first festival. Their ambitions for the festival circumscribed a worldview that is locally focused, encouraging of creativity, mutually supportive, environmentally conscious.

“The festival was born from a group of idealistic artists as a labor of love,” Tanya Zabinsky, one of those founders, wrote The Public in an email a couple weeks back. Zabinsky is the creative force behind Planet Love, whose apparel designs have become regional iconography. Her husband, Joe DiPasquale, is the festival’s chairman. “This year the theme is ‘The Circle of Joy,’ which is the essence of the festival: inclusive and celebratory. It’s inclusive of many art forms from visual art to musical to dance to healing arts, spoken word, puppetry, storytelling, edible and more, all featuring local, local, local. It’s inclusive of cultures. It’s inclusive of all ages by offering kids high-quality, hands-on art activities developed by visionary artists and art educators. It’s inclusive of Buffalo’s cultural and environmental organizations that are able to gain exposure. It’s inclusive of economic brackets by being free and located accessibly. It’s inclusive of the earth, by honoring the earth as our partner. In addition to recycling, the festival also composts and gives composting demonstrations, so festival-goers can do it at home and keep the ripples rippling! The festival is also inclusive of the community itself: approximately 300 volunteers enthusiastically offer their services to make the festival happen.”

That’s the kind of community the Elmwood Festival of the Arts would vote for; indeed, it’s the kind of community it has been fostering year after year, as it has grown quickly from upstart into an institution. As Zabinksy points out, children have grown up in the festival—taking part with their parents, volunteering, making art, marching in the kids parade. It won’t be long before those kids start running the festival and raising their kids in its bright, three-day whirl of camaraderie and thoughtfulness and street-level artistry.

As ever, this year the Artist’s Market comprises more than 150 juried regional artists and craftspeople. The Festival Cafe offers delicious healthful food prepared by local vendors, with plenty of vegetarian options (“No fried dough,” DiPasquale told me in 2000, and today, 18 years later, there’s no fried dough.) The beer kiosks pour local beer. Cultural Row allows dozens of local cultural organizations to introduce festival-goers to their work; Environmental Row allows organizations and institutions bent on preserving and improving our air, soil, water, and built environment to talk about what they do.

One of the great joys of the festival is that you need not plan your arrival or departure around a particular entertainment. There is always something good to see and hear in the Dance Tent, at the 7-11 Stage (at Elmwood and Auburn), or on the larger St. James Stage (at the corner of Elmwood and St. James). The Kidsfest, which occupies the parking lot of the Lexington Natural Foods Co-op, offers both performances and nonstop activities for children and their adults. There is no down time at the Elmwood festival of the Arts and consequently no bad time to go.

Still, for the planners out there:

Saturday morning at the Dance Tent opens at 10am with Isabella Blue and the Buff Huffs, who play some sweet Americana-folk and old-time music—great for greeting the day, great for dancing. They are followed by two hot-tempoed jazz acts: first, Dr. Jazz and the Jazzbugs (11am), performing hot jazz in the rich tradition of 1920s and 1930s songwriters; then, at noon, the Hot Club of Buffalo, who perform gypsy swing in the tradition of Django Reinhardt.

They’re followed at 1pm by Tough Old Bird, modern folk music from Fillmore, New York, then BloodThirsty Vegans, who have provided the soundtrack to Buffalo’s progressive movements for two decades.

Sunday at 10am, the Dance Tent opens with Sacred Sounds Yoga, then quickly shifts gears at 11am with the Doug Yeomans and the Lo Blu Flame’s virtuosic tour of Americana, then shifts gear again at noon with the rhythmic drum and performance spectacle that is the Slyboots Circus. Next is the Latin jazz of Sol y Sombra, followed by Saranaide, purveyors of soulful world beat grooves.

Things then take a turn toward the country again, with the fabulous Steam Donkeys at 3pm and alt-country singer-songwriter Leroy Townes at 4pm.

The 7-11 stage is always a delightful grab bag of performers. At 10 am on Saturday, singer-songwriter Kenarahdiyoh offers indigenous music and a blessing to open the festival. he is followed by violist Leanne Darling, then acoustic duo Carmen & Lizzy. At 1pm, the improve troupe Comedy Sportz takes the stage, followed by singer-songwriter Mike Brown. Brown is followed by the Buffalo Gay Men’s Chorus, which is always a hoot, and the stage winds down with two more acoustic acts: John Moore, followed by Rust Belt Birds.

Sunday morning, the stage hops right to it with canal blues from the Heenan Brothers at 10am, followed by the Outfartrio Jug Band at 11am and Irish music from Cairde at noon. A spoken-word showcase runs 1-2:45pm, followed by three more acoustic acts: the subtle and artful trio Birdie Cree, local country bluesman Danny Lynn Wilson, and the duo Paul & Helen, both members of the much celebrated band McCarthyizm.

Don’t call it the main stage; that title belongs to the whole festival. Call it the largest of the performance stages. It opens Saturday at 10am with Fluse, a jam band that offers covers and originals. They are followed by jazz fusion from chloroform. At noon, the Love Parade—comprising three members of Buffalo’s Music Hall of Fame—offer classic rock. At 1pm, Chuckie Campell & Black Den shift to hip-hop with a full live band. Ray Hangen’s RCH All-Stars follows with a pickup band of local roots music legends. Next is blues from bassist Robert Parker, a.k.a. Freightrain, followed by danceable R&B by the Nickel City Band.

The evening closes with country and rockabilly from the Heavenly Chillbillies, followed by funk, dance, and rock and roll from Critt’s Juke Joint, led by the incomparable Eric Crittenden.

A full list of performers, exhibiting artists, and food vendors, as well as a festival map, is available at heafa.techriver.net.