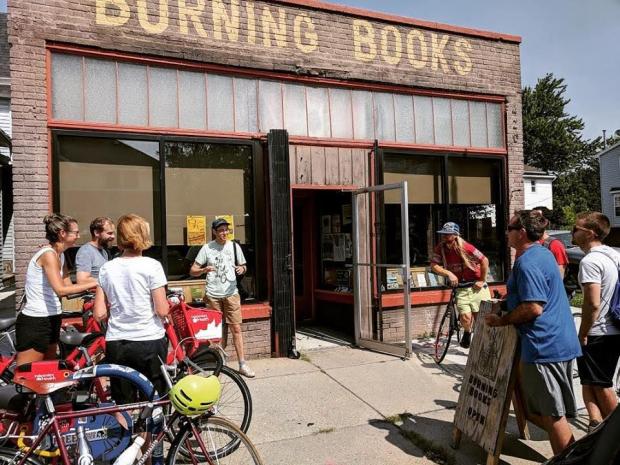 Last weekend, Marc Moscato launched a new bicycle tour of Buffalo: the B-Sides Ride, which takes cyclists on a journey that touches on histories of the city that aren’t frequently celebrated. Workers strikes, antiwar movements, LGBTQ activism, battles over women’s reproductive rights—Buffalo has a rich legacy of social justice and radical political activism, much of which doesn’t make it into tourism literature.

Moscato, who recently returned to his native Western New York after a decade on the West Coast, hatched the idea early this summer. The tours take place Saturdays and Sundays, leaving at 10:30am from Breadhive Bakery (402 Connecticut Street). The tours are free, though tips are appreciated, and reservations are required; tour groups are capped at 25 people. To register, visit buffalobiketours.com.

We asked Moscato to tell us a bit about the B-Sides Ride and its inspirations:

Who are you? What were you doing here before you left for the West Coast? What are you doing here now? My name is Marc Moscato, I’m a Buffalo native and arts organizer. My background is in film and video—I studied at UB, worked at a TV station, and edited commercials before realizing my values didn’t align with corporate media. So I began curating film screenings at Squeaky Wheel and went to grad school for arts management. That brought me out to Portland, OR, where I spent several years working for arts and civic groups, before founding Know Your City, an organization that leads tours and publishes guidebooks. I recently decided to return to Buffalo for the cheaper cost of living and the opportunity to create more of the life I want.

What’s the inspiration for the B-Sides Ride? To be honest, I never really liked history growing up. I thought it was deadly boring, I didn’t understand why I had to memorize all these facts that had no relevance to my life. Then, in my early 20s, I was involved in political organizing work—I was a co-founder of Buffalo Critical Mass and was involved with the 2001 FTAA protests. Through these experiences, I started to see the connection between the city’s history and some of the larger social factors that shaped it.

I also of course have been an avid bicyclist for years—I went almost 20 years without a car. Buffalo is a great city for biking in the warmer months—it’s flat and we have a ton of parks and natural places. When I moved back, I noticed there really isn’t anyone that’s doing regularly scheduled bike tours and there was an unmet need.

I’d also say the tour is inspired by free walking tours found in most major European cities. These tours don’t charge an admission—they just ask for a donation at the end. This model is just beginning to catch on in the US and we’re the only free tour in the city as far as I know—so that’s another unique thing.

Tell us about a couple of the places you take your riders, and the stories you tell about them. One site I have affection for is the site of the Afro Asian Bookstore, which played a central role in the 1967 race riots on Jefferson. The store sold books, African crafts, and soul and jazz records that were played on a loudspeaker attached to the building. In some bizarre series of events, its owner, Martin Sostre, wound up being the target of a drug sting and was sentenced to 41 years in prison for allegedly selling a $10 bag of dope. He later became an outspoken reformer for prisoner’s rights, including winning the right to freedom of religion for prisoners. His story has totally been lost to history—when he died there wasn’t even an obituary in the paper.

We take people by the Calumet Building, the site of the offices for the Ku Klux Klan in Buffalo. We tell people about the story of how the Klan operated here in Buffalo, the grassroots opposition, and how they were eventually exposed by the Mayor Francis Schwab. It’s pretty crazy to think that all happened less than 100 years ago in the heart of Chippewa Avenue.

A last favorite stop is Ralph Martin’s, Buffalo’s first gay bar, which operated from 1934-1951. Martin was a fascinating character—a champion boxer who was politically connected at city hall so he could more or less operate his club openly. The place was a hit with Buffalo’s gay, lesbians, and prostitutes—they had drag shows, same sex dancing, and if you were too drunk, you could sleep in the booths overnight. The site now has a statue of Jimmy Griffin, Buffalo’s famously anti-gay mayor, at its location.

How did you find these stories? How did you choose them? Who helped, and how did you research them? Many of the stories I was already familiar with as I grew up here. We have a stop about Operation Rescue, and I clearly remember that as a kid and being terrified about what was happening. So it was a lot of fun to revisit those stories and think of how to patch together a narrative.

I started by identifying some basic themes and reading up on local history—especially useful were Mark Goldman’s books. This led me to some more specialized topics and, after a few weeks, I developed a list of potential topics and stops. From there, I tried to develop one stop per week and by the end of a couple of months, I had enough content for a tour. From there, it’s been a matter of editing and fine tuning, which I’m still doing!

I definitely want to acknowledge the help I’ve received from our libraries—Buffalo History Museum, University at Buffalo Archives, Buffalo & Erie County Library, and Buffalo State College—as well as Housing Opportunities Made Equal, Partnership for the Public Good, and George Scott at the Colored Musicians Club. Some individuals were great resources—Ana Grujić, Doug Ruffin, Alberto Cappas, Bruce Beyer, and Mike Frisch. Finally, I couldn’t have done this without the help of my friend Nathaniel “Vegan Nate” Hill and Brian Grunert at White Bicycle.

You must have had to leave out some sites and stories, for lack of time. Want to share some B-Sides to the B-Sides? Definitely—putting together a tour like this can be challenging as we’re limited by time and geography. One thing that’s been trying is how to best incorporate is the city’s labor history. We know Buffalo is a part of the Rust Belt and its industry has been so much a part of its story, as has the labor movement. It’s challenging as many of the sites of our big strikes took place on the outskirts.

One place we were originally going to include was the Teck Theater, the headquarters for the Communist Party in Buffalo. The building was raided twice during the Palmer Raids in 1919 and 1920, with more than 100 arrests—and ultimately many deportations. We also had the House of Un-American Activities in Buffalo, which resulted in the blacklisting of Manny Reid and Milton Rogovin, two of Buffalo’s most well-known artists. Nothing is left of the building and it’s hard to get to by bike so we scrapped that one. Incidentally, there’s still no memorial anywhere in the city to acknowledge any of our labor leaders.

A few other sites we chose not to include due to distance are Seneca Indian Park (where Red Jacket and Mary Jemison were buried), Broderick Park (a significant stop on the Underground Railroad), and University at Buffalo’s South Campus (site of late 1960s activism). All great stories but just a bit out of the way.

How do these stories jibe with more commonplace narratives of Buffalo history—and, for that matter, its present? What should we take from them? We leave the tour’s interpretation open-ended. But a main goal is for people to start to think about this place critically and where do we want to go from here. As George Santayana’s is famously quoted, “Those who do not remember the past are condemned to repeat it.”

Most people know Buffalo was booming at the turn of last century when it hosted the Pan American Exposition. For some reason, the analysis usually stops there. I think the real question is what happened and why? When we visit different parts of the city and see its disinvestment, there’s so much to unpack. And while we address some of the city’s unfortunate past, we also show the visionaries—people who had unconventional ideas at the time but who made this place a stronger and better place. We have some really amazingly beautiful stories here of people coming together to challenge inequality and fighting for a freer place.

Ultimately, this tour is about drawing the connections between the factors that shaped this place, and getting people on bikes, seeing the city with new eyes.

What’s next? Well, we’re doing these tours every Saturday and Sunday at 10:30am, so that’s what’s immediately next! We’ll run them until at least the end of September—or as long as people keep showing up. We’re hoping to build on this trial year and expand the schedule in 2019 with more tours and new themes. I’m personally hoping to take more of a backseat and hire guides so that I don’t have to do all aspects of the business.

I’m also trying to develop some larger ideas on how to promote Buffalo and the Western New York region. Having lived in Seattle and Portland and seen both the positive and negative effects of economic development, I want to see Buffalo continue its revitalization but avoid some of the common pitfalls, especially in regards to displacement. I’d love for this region to be a place that’s not 20 years behind the curve but one that’s leading groundbreaking community-designed projects at the intersection of art, history, and community development. Stay tuned!