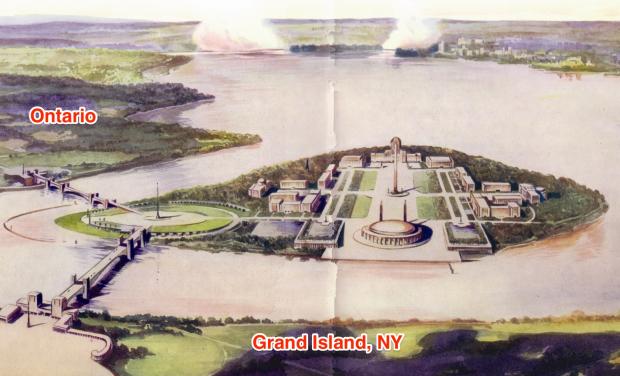 Late last week, United Nations General Secretary Ban Ki-Moon came to Buffalo to speak to our various elites, and to do a little sightseeing.

Few people know that the UN’s headquarters was almost built on tiny Navy Island, nestled between Grand Island and the Ontario shore.

If you want to second-guess bad decisions from long ago, you can start with the plan from the 1940s that, had it been implemented, would have guaranteed that our region comprised of Southern Ontario and Western New York would have been an economic powerhouse.

Navy Island is an uninhabited green blip on the map. After World War II, as the United Nations was being formulated and ideas for its headquarters were being considered, Navy Island was a top contender.  Because of its location between – and easy access from – two friendly nations, Navy Island would have been a better symbolic choice for the UN than the East Side of Manhattan, and a less expensive, less congested one, as well.  Turning a small island over to a peacekeeping organization with deep pockets, turning it into an international zone employing and attracting tens of thousands of diplomatic, secretarial, and administrative staff to southern Ontario and western New York would have had a billion-dollar impact today.

The ancillary economic impact from all those well-remunerated people engaging in the local economy is unfathomable today, and would have attracted businesses, schools, investors, people, and money.

Instead, the UN is on the East River, on land bought with a donation from the Rockefellers.  Had the UN been located in WNY, I wonder how much different this region would be, how it would look, how it would have evolved.