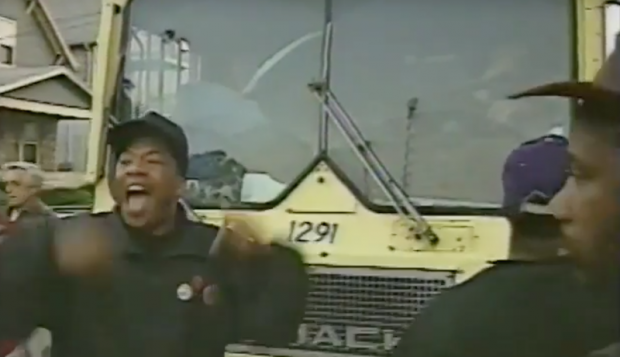 A much younger Charley Fisher, about to lie down in front of a city garbage truck to protest the city's user fees.
by
Geoff Kelly
/ Aug. 15, 2017 1pm EST

When Betty Jean Grant announced that she was running for mayor, she also announced that she would relinquish her seat representing the 2nd District on the Erie County Legislature, where she has been since 2007. (Previously, she served stints on the Buffalo Board of Education and Buffalo’s Common Council.) A crowd of candidates quickly emerged to take her place, and four of them survived the petition process to make September’s primary ballot, which will determine who wins the seat.

The candidates are April Baskin, a political novice who lives on the West Side but has East Side roots, and who won the Democratic Party endorsement; Charley Fisher, a former member of Buffalo’s Common Council who is looking to make a political comeback, 14 years after last holding public office; Duncan Kirkwood, a young East Sider who comes out of the charter schools advocacy movement; and Dave Martinez, a late addition to the race from the West Side, who, like Baskin and Kirkwood, is a new name in local politics with significant familial connections in the district.

Here are some reflections on their most recent campaign finance filings, or lack of them, and what they say about their candidacies.

April Baskin won the Erie County Democratic Party’s endorsement for the seat, but not a lot of people know who she is. She has virtually no voting record. Her campaign account shows just shy of $11,500 as of Friday, most of it raised in the last two months and most of it coming from regular donors to candidates supported by Democratic headquarters. She has spent about $1,700 so far.

Baskin’s candidacy was promoted by Maria Whyte, the former county legislator, then commissioner of the county’s Department of Environment and Planning, and now deoputy county executive. Baskin is supported by the county’s Democratic Party chairman, Jeremy Zellner. Presumably, all the work and expenditures on her behalf—and she submitted an impressive 5,000 signatures on her nominating petition—are coming out of Democratic Party headquarters. That should help her with getting out the vote—she’ll have experienced election day operatives manning the phones and walking the district for her—but name recognition is a problem for her, just as it is a problem for two of her opponents. The only candidate with a well-known name is Charley Fisher.

Fun fact: Baskin is the great niece of Johnnie B. Wiley, revered East Side community activist who died in 1996, In 1997, the athletic complex where War Memorial Stadium used to be, at Best and Jefferson, was named for Wiley. One of the advocates for thus honoring Wiley was Charley Fisher, who considered Wiley a mentor, and who is now running against Baskin for the 2nd District seat.

NOTE: An earlier version of this article indicated that Baskin had not filed campaign finance disclosure reports. That was an error: I was looking at the wrong committee. Mea maxima culpa.

CHARLEY FISHER, BLAST FROM THE PAST

Charley Fisher was an at-large member of Buffalo’s Common Council back when there still were at-large seats, 1999-2003. (He ran for the Fillmore District seat in 2003 but lost.) He cut his teeth as an activist and then president of BUILD, the storied East Side organizing group that, in addition to doing admirable work in the African-American community, launched many of its members into political careers and patronage jobs—in Fisher’s case, both. After losing his Common Council seat in 2003, Fisher left town for a spell, then came back and has attempted to reinvigorate the BUILD brand, with himself as president. This run for the 2nd District seat is probably the last best test of his viability as a public figure with currency and relevance.

Fisher has not yet filed his 31-day pre-primary disclosure. But his July disclosure form showed $765 in the bank; in the first blush of his candidacy, he raised $1,700, more than half of which ($950) came from political activist and attorney Pete Reese, who is waist-deep in this race. (See the section on Dave Martinez, below.) Fisher’s campaign spent $952 on the usual stuff—shirts, literature, etc.

Fun fact: On YouTube, you can find a very long documentary on BUILD produced in 1997. (There are at least 15 parts of various length.) The opening montage includes footage of a young Charley Fisher defiantly laying down in front of a city garbage truck in protest of the city’s user fee.

Duncan Kirkwood is the most successful fundraiser of the four candidates on the Democratic primary ballot. His campaign has raised $12,000, much of it in online donations. About a quarter of that comes from Kirkwood and his family, and there are significant donations from out-of-town colleagues who, like Kirkwood, have worked to promote the charter school movement. Kirkwood works for the Northeast Charter Schools Network, which advocates for the expansion of charter schools in New York and Connecticut.

As of Friday, Kirkwood had $2,600 on hand. He has declared about $7,000 in expenditures on the usual stuff—mailings, t-shirts, a website. His filings are meticulous, far more detailed than most.

He’ll need to spend that money, because he has little name recognition and no overt backing from any political organization. Kirkwood was originally affiliated with Grassroots, the East Side political club that Mayor Byron Brown helped to create. But Brown made a deal with politicians affiliated with Democratic Party headquarters to drop support for Kirkwood and carry petitions for April Baskin, the headquarters-endorsed candidate from the West Side, and Kirkwood found himself suddenly standing alone. Most folks we’ve spoken to say that Grassroots operatives Maurice Garner and Alonzo Thompson have continued to help Kirkwood quietly, and that the mayor’s legion of petition carriers were told not to push Baskin’s petition too hard as they walked door to door, but nonetheless he is, with a month to go, a man without a country. He’s been very good at building a social media profile; it will be interesting to see if he can use that medium to turn out voters on primary day.

Lack of name recognition aside, Kirkwood has the advantage of youth and dynamism. But there’s this one squirrelly story we heard that gives us pause: Earlier this spring, Kirkwood approached Open Buffalo, which is advocating the creation of a land bank in the Fruit Belt to protect the neighborhood’s residents from gentrification, and offered to sell that land bank a couple properties on Carlton Street belonging to a nonprofit development corporation controlled by Reverend Michael Chapman of St. John Baptist, the Goodell Street church to which both Kirkwood and the mayor belong. (Apparently, Chapman has assigned vacant lots his church controls, and which he has been unable to develop, to various parishioners to make fruitful. More on this strangeness another time.) Kirkwood wanted a lot of money for the Carlton Street properties and a press conference, too, and that’s not what Open Buffalo does, so Open Buffalo said no. Weird, right?

Fun fact: On Facebook, Kirkwood has advocated for a clean, mutually supportive contest between himself and his fellow East Side candidate Charley Fisher. But his campaign used a surrogate, political activist Katrinna Martin-Bordeaux, to challenge the validity of Fisher’s nomination petition. Her challenge was dismissed because Martin-Bordeaux does not reside in the district and so has no standing to do so.

Like Baskin, Martinez lives in the West Side part of the district. Martinez did not even register a campaign committee until last week. He has not yet filed the 31-day pre-primary report, but he did file an off-cycle report after registering his committee, showing $1,050 on hand. The first $100 is his own; the other $950 came from his treasurer, the political activist and attorney Pete Reese, who defended Martinez’s nominating petition at the Erie County Board of Elections and made sure his candidate got on the ballot. (Reese also defended Charley Fisher’s nominating petition from the challenge that came from Duncan Kirkwood’s camp, having first solicited both candidates to waive any conflict of interest thus engendered.) Martinez is the son of a respected dentist who is well known in the West Side’s Latino community. It seems likely that his candidacy is intended to draw West Side support from Baskin, though you never know what might happen in a four-way race in which every candidate has significant obstacles to negotiate.

Fun fact that has nothing to do with Dave Martinez: Clayton Hoyt, who is public information officer for Buffalo’s Common Council and the son of Sam Hoyt—former member of the state Assembly and now Governor Andrew Cuomo’s right hand in Western New York—considered a run for the 2nd District seat. We’re told it took some doing for Democratic Party headquarters to convince the Hoyt team, with all its West Side name recognition, donor connections, and political machinery, to bow out of the race and let Baskin have a go. One argument that HQ presented was that the 2nd District is an African-American seat. (Baskin is African American, as are Fisher and Kirkwood.) This is not really true. It is a fact the Betty Jean Grant was preceded in representing a district more or less similar to Grant’s by Demone Smith, and that Smith was preceded by Crystal Peoples, and Peoples by Roger Blackwell. However, the redistricting that followed 2010 Census, in which the district’s number changed from 7th to 2nd, also changed the district’s geography and demographics, which now embrace much of the toney Delaware Park area, as well as the Elmwood Village and Allentown, and a swath of the wildly diverse neighborhoods west of Richmond Avenue. It is whiter than it used to be, and more Hispanic.