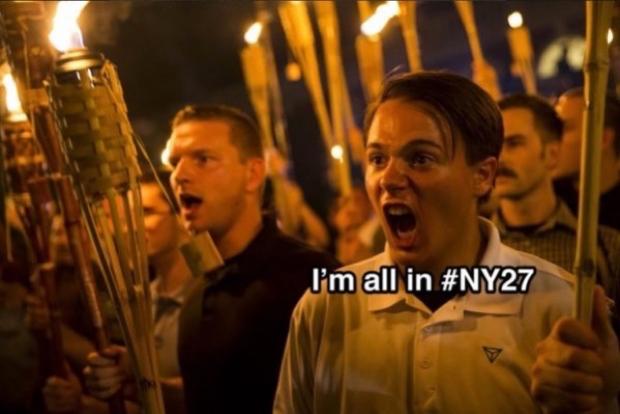 Who Will Replace Collins?

It’s downright irresponsible for Representative Chris Collins—currently under arrest and out on bail due to federal felony indictments arising out of insider trading—not to resign his office. To the extent he was really representing his constituents in New York’s 27th Congressional District at all, it’s become quite clear that his priorities have shifted from “public service,” such as it was, to self-preservation.

At least he (finally) had the self-awareness to drop out of the race. Now, everyone is talking about the process to replace him on the ballot—an exercise that will be far more difficult than anyone realizes, given the late date. The consensus seems to be that Collins can’t simply move out of state, so there are talks underway for Collins to be either appointed to some other elected position, or to run for some minor position such as Clarence town council or town justice.

Generally speaking, it’s easy to boot a lawyer off a ballot because they can be shunted off to literally any judicial race anywhere in the state. A non-lawyer can serve as a town judge, so it is possible that Collins gets moved into a town judgeship race in Clarence. The town’s Republican committee is a pretty strong monolith, which can probably take the hit of acting as a safe haven for an accused felon. Ed Rath’s Erie County Legislature seat has also been floated as an example, as well as the possibility that a town councilman sacrifices his office so that Collins can run for it, for the good of the party.

That would then, ostensibly, allow the Republican chairs in the eight western New York counties to select Collins’ replacement—a wholly undemocratic and opaque process. Chances are the chairs are looking for someone with name recognition in the district who can quickly and easily attract the financing needed for the run.

There are close to 20 names floating out there for Collins’ replacement. Some of them you know, some you probably don’t. But over the weekend, shortly after Collins announced he’d drop out (I predicted it’d be Friday), a slew of thirsty GOPers were tweeting and posting “I’m all in for #NY27.” Notables from Buffalo include the aforementioned Ed Rath, Assemblyman Ray Walter, State Senators Rob Ortt and Mike Ranzenhofer, disgraced racist developer Carl Paladino, and Erie County Comptroller Stefan Mychajliw.

I don’t care whom the Republicans pick, because it doesn’t at all matter. The campaign strategy has already been polled and formulated. All they have to do is plug in an avatar for the carefully crafted pro-Trump/anti-Pelosi messaging that attacks family man and in-house corporate lawyer—Democrat Nate McMurray—as some sort of antifa radical. Mychajliw, especially, is trying to paint McMurray as some sort of Marxist guerrilla rebel leader slightly to the left of Che Guevara who will feed you a Venezuelan existence. Imagine: a supporter of Donald Trump’s robotically parroting someone else’s talking point about McMurray’s demeanor. To call it insane would be an grave insult to insane people.

With his oddly aggressive table reads of this season’s script, Mychajliw pivots awkwardly from his putative 2019 Erie County Executive race by simply replacing “Poloncarz” with “McMurray.” Mychajliw tells you absolutely nothing about what he’s for, except one thing: Donald Trump. They love to invoke Nancy Pelosi, who has as much influence on the average Western New Yorker’s day-to-day life as, say, the Ancient Aliens guy, but these people need to play to the WBEN-listener rubes who hate Democratic women from the coasts, for whom they have choice one-word nicknames.

Many of these guys are going to flirt with the racist alt-right, if, like Paladino, they aren’t full-blown members already.

It’s curious to watch the guy who’s been a household name in Buffalo for about 20 years punch down so hard and so falsely against McMurray, who was an unknown until last Wednesday morning. The Republicans know they’re at risk, and if Trump is as popular in the district as they say, it makes little sense for them to go so laughably negative so fast. Maybe McMurray’s doing better than even he realizes.

So, whom will the Republicans pick? It doesn’t matter. By all rights, the default Republican candidacy should belong to WBEN commentator David Bellavia, who has been patiently waiting through Chris Lee, Jane Corwin, and Chris Collins. But money talks and decorated soldiers walk, so it’s likely to be someone from the Buffalo area.

There will be litigation, and the Republicans have only Chris Collins and their trust in him to blame for this mess he’s handed to them.