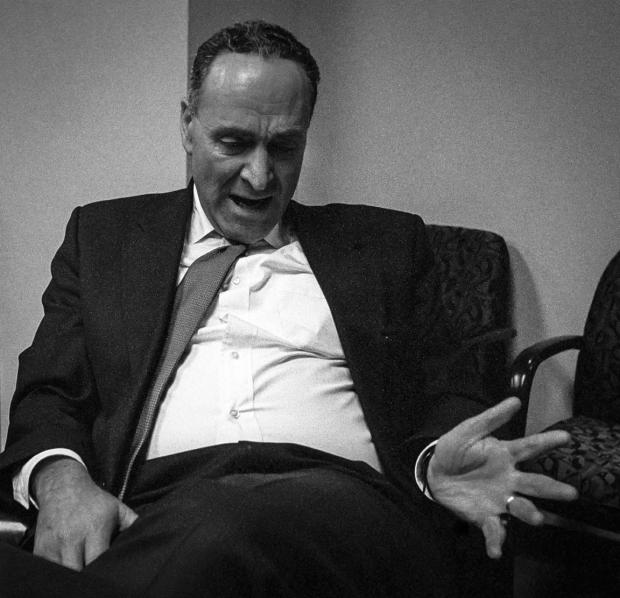 The hidden announcement
Senator Chuck Schumer announced on Medium on August 6 that he would not support the Obama administration’s nuclear deal with Iran.

That agreement, the “Joint comprehensive Plan of Action,” was joined by the five permanent members of the UN Security Council—China, France, Russia, United Kingdom, and the US—as well as Germany. Representatives of all those countries (a group referred to as the P5+1) met secretly with Democratic senators last week urging them to accept the agreement.

Schumer posted his defection in the middle of the Republican circle-jerk on Fox on August 6. Some commentators suggest he picked that time and medium to draw as little attention as possible, and that he did it just as Congress was going out of session so he wouldn’t have to lobby anybody or listen to the Republicans praise him for joining their side.

That reminded me of JFK’s comment that when he decided to appoint his brother Attorney General, he opened the door of his Georgetown house in the deep dark of night and whispered, “It’s Bobby.” I didn’t believe the JFK story then or the good intentions hypothesis now. Schumer is serious about this.

What Schumer said
Schumer concluded his long and wandering web posting with this:

To me, the very real risk that Iran will not moderate and will, instead, use the agreement to pursue its nefarious goals is too great.

Therefore, I will vote to disapprove the agreement, not because I believe war is a viable or desirable option, nor to challenge the path of diplomacy. It is because I believe Iran will not change and under this agreement it will be able to achieve its dual goals of eliminating sanctions while ultimately retaining its nuclear and non-nuclear power. Better to keep U.S. sanctions in place, strengthen them, enforce secondary sanctions on other nations, and pursue the hard-trodden path of diplomacy once more, difficult as it may be.

For all these reasons, I believe the vote to disapprove is the right one.

This is nonsense. Iran doesn’t have any nuclear power, so how can it “retain” it? The only country in the region with nuclear power, as Schumer knows full well, is Israel. What right do we have to demand that Iran obliterate its “non-nuclear power,” which is Schumer-speak for “conventional weapons”? If he indeed believes that “nefarious” Iran “will not change,” what, other than war, is a satisfactory course of action?

Without the fluff, this passage translates: “I don’t and won’t trust Iran, I don’t believe the scientists who insist inspections will be effective. So let’s keep the sanctions in place, sanction our friends who don’t buy this paranoia, and let’s engage in diplomacy (the path I’ve just rejected), even though that policy will vastly increase the likelihood of another unnecessary war in the Middle East.”

On the other hand
New York’s other senator, Kirsten Gillibrand, used Medium the same day (I don’t know which of them posted first; Medium doesn’t time-stamp) to say why she supported the treaty. It’s one of the most cogent counter-arguments to Schumer’s rambling statement I’ve seen. She ends: “Our goal has been, and remains, to prevent Iran from developing a nuclear weapon. We have far more ability to achieve that outcome if we approve this deal.”

Top American nuclear scientists also agree. According to the New York Times, “Twenty-nine of the nation’s top scientists — including Nobel laureates, veteran makers of nuclear arms and former White House science advisers — wrote to President Obama on Saturday to praise the Iran deal, calling it innovative and stringent…The first signature on the letter is from Richard L. Garwin, a physicist who helped design the world’s first hydrogen bomb and has long advised Washington on nuclear weapons and arms control.”

A huge number of Israel’s former heads of intelligence, Mossad, and the military also endorse the agreement. If there are current Israeli officials in similar positions who approve of the treaty they can’t say a word: Netanyahu would fire them on the spot.

Money
The Republicans in the Senate will vote against this important treaty, which is endorsed by the industrialized world and by top nuclear scientists, and, according to the polls, favored by a majority of Americans and, percentage-wise, a larger majority of American Jews. They don’t care about the facts: They vote against everything Obama proposes. Their voting is like what your foot does when the doctor taps your knee with the rubber hammer.

But why would Chuck Schumer join them?

One reason might be money. He’s up for reelection in 2016. He also intends to run for Harry Reid’s job—Senate Majority Leader if the Democrats take the Senate back, Minority Leader if they don’t. (Reid is retiring next year.) He will surely win in New York, but a very big win will help lock in that leadership position. He has $19 million in his political war chest now. Rejecting the Iran deal will lose him a lot of contributions from the Left, but conservative Zionist billionaires like casino owner Sheldon Adelson will probably more than make up for the loss.

Schumer is a very canny politician: I haven’t a doubt that before he announced his defection, he and his staff spent a great deal of time running the numbers. He also probably has made the political calculation that jumping ship on this president, who will be gone by the time he runs for the leadership position, won’t do him that much political harm. Schumer was a major fundraiser for Democrats in Congress, and a lot of people in office now owe him. He’s counting on old debts and short memories.

Pressure
He also had pressure. A lot of it. NPR reported, also on August 6, that AIPAC (American Israel Public Affairs Committee) and Citizens for a Nuclear Free Iran (an AIPAC front) “plan to spend between $20 million and $40 million on this fight. That range vastly dwarfs the $5 million its main adversary has to spend—J Street, a pro-Israel group that supports the deal.” J Street also differs from AIPAC in that it is pro-peace and pro-fairness to the Palestinians; AIPAC advocates neither.

“Since the deal was announced mid-July,” the NPR article continued, “J Street has had more than 125 lawmaker meetings. On the other side, AIPAC says it had 400 meetings in congressional offices just last week.”

AIPAC, reported the New York Times on August 7, “had sent 60 activists to Mr. Schumer’s office to lobby him last week, while Citizens for a Nuclear Free Iran, an offshoot of Aipac [sic] planned to run at least $25 million in advertising against the deal, ran television spots in New York City. As Mr. Schumer deliberated, he spoke with Aipac leaders, but also with representatives of the pro-Israel group J Street, which supports the deal.”

You can be sure J Street didn’t have the resources to get 60 lobbyists to lean on Schumer or $25 million in ads, many directly targeted specifically at him.

The White House lobbied Schumer too. “’I don’t know if the administration’s been outlobbied,’ Josh Earnest, the White House press secretary, said Thursday before Mr. Schumer’s announcement. ‘We certainly have been outspent.’”

The Times article also reported that AIPAC “would be flying 700 members from across the country to lobby their members of Congress to reject the deal. Mr. Obama’s team asked to brief the group at the White House, and was told instead to send a representative to a downtown Washington hotel.” AIPAC refused to allow the lobbyists to ask the White House representatives at that meeting any questions.

The most striking fact here is, in opposing the majority position of American Jews on the treaty and instead advocating Netanyahu’s position, AIPAC reveals who and what it really represents.

AIPAC doesn’t just lobby. It also punishes. It has for years taken the position that opposition to Israeli policy is the same as anti-Semitism. One of their Los Angeles affiliates even came after me. They wrote UB officials wanting me investigated as a possible anti-Semite because I’d written an article in Counterpunch about Israeli mortars killing two zebras and a giraffe in the only zoo in the Palestinian territory. There was no argument about the facts: The animals had been killed by Israeli shelling and their deaths had been reported in the New York Times. The AIPAC pod’s objection was that I’d written about it.

Schumer himself
Then there is Schumer’s own militancy. In many regards, he is a liberal, but not when it comes to war. Schumer voted for the Iraq War in 2002. Before that vote, he held open meetings around New York State, ostensibly to test public opinion. One of those meetings was at the Albright-Knox Art Gallery in Buffalo. Although he politely listened to people who doubted the WMD stories by Judith Miller in the New York Times (which turned out to be untrue) it was clear that his mind was already made up and he was going to vote for war, the facts be damned.

Same thing now. He says he’s thought long and hard on this. I don’t buy it. He’s never, to my knowledge, voted against anything the Israeli government wanted, and this time Benjamin Netanyahu wanted him to vote against President Obama. A guy can only follow one leader at a time.

Why this matters
If the exculpatory theories—he did this when he thought no one would notice when Congress was about to go out of session—are true, it’s smarmy in all regards. This is too important an issue for ordinary political smarm.

He is dancing to Netanyahu’s drum. That’s good for Netanyahu, as chauvinistic a national leader since South Africa during the apartheid time.

The best article I’ve seen on the defects of Netanyahu’s fantasies about Iran was written by the Israeli journalist and peace activist, Uri Avnery: “The Treaty,” published July 18 on the website of Gush Shalom (the Israeli Peace Movement). It’s too long to summarize here, but the basic point is that Iran is a civilized country, intelligently run, with a long history, and it probably has no intention of building a bomb because it doesn’t need one. The article concludes: “One of Netanyahu’s arguments is that the Iranians can and will cheat the naive Americans and build the bomb. He is sure that this is possible. Well, he should know. We did it, didn’t we?”

Avnery’s article is well worth a look. I wish Chuck Schumer had read it before he caved to AIPAC on this one.

Reality and a fantasy
Who can know what is in anyone’s heart or mind? Aristotle, in The Poetics, said we understand character not through words but through the choices people make. Chuck Schumer announced a key choice in a media moment and in a media forum where it very well might have disappeared. But it didn’t. He didn’t sneak it through. He gave his reasons, but whether they were the real ones or cover for the real ones, the choice was cynical.

My final image is a total fantasy, so please indulge me for a moment. It is Barack Obama coming into the Rose Garden to talk about all this. Chuck Schumer is just behind him. As they approach the microphone, Obama says to Schumer, turning his head and speaking over his shoulder, “You’ve got my back?”

“Yes, sir, I surely do,” Schumer says. In his hand is a beautiful knife. It is one of the presents the 60 AIPAC lobbyists gave him.

Bruce Jackson is SUNY Distinguished Professor and the James Agee Professor of American Culture at the University at Buffalo. He is a contributor to J Street.