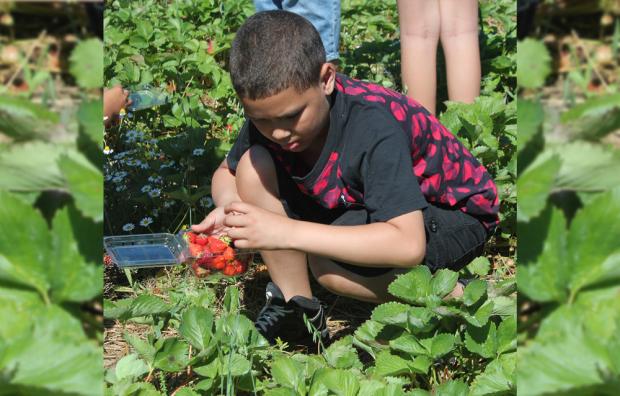 As reported by Aaron Lowinger in The Public back in February 2015, the Buffalo Public Schools received a $45,000 grant from the USDA to integrate more local agriculture into the diet of its students. Thus far they are succeeding: 11 percent of the produce budget went to New York State farms last year (data from the previous year wasn’t available, however all agree it was a substantial increase) with a goal of 35 percent for this year. Since then the Buffalo Public Schools have also received a grant from New York State to further work out how to implement this program from a 10-pilot-school test to working effectively district-wide.

Meetings with numerous people working on the project reveal that the number of moving parts is staggering. There are bureaucratic obstacles to who can sell produce to the schools. Farm-to-table darling Dan Oles, for example, is too small. And there are also food safety certifications to adhere to, and pricing challenges for the farms as they move from a per-unit to a wholesale model. The bidding process for buying food is such that sometimes local farms can’t compete with industrial agriculture, and then there is seasonality: Perhaps this year’s drought will affect how much food is grown

And that is just on the farmer’s side. That said, the project has many successes under its belt, with perhaps the most notable being the Harvest of the Month’s kale apple salad.

The Harvest of the Month comes with all the bells and whistles: nutrition sheets, bold graphic design, and a successful series of Taste Test Thursdays. The way the program works is simple: A food is identified (in this case kale) and then Lauren Welsh, who develops recipes for the district, gets to work with her team. From there, groups go to the pilot schools for Taste Test Thursday. In the words of Rebekah Williams from the Massachusetts Avenue Project (MAP), “Taste Test Thursday was the day we’d try out the different menus. Students would get a chance to taste and vote. They had ‘thumbs up’ and ‘thumbs down’ stickers. I was one of these cheerleaders who’d go every week to get more students participating in the Harvest of the Month. Without that outreach, students might just pass it over on their tray, but engaging the students, telling them it came from a local farm, that they’d get to say whether or not they liked the recipe, students really got behind that.”

Buffalo Public Schools Director of Food Services, Bridget O’Brien Wood, agreed: “They did enjoy it. It was great. We were in the cafeteria with them and could encourage them when they were skeptical to try it, and most of them did try it—things they weren’t at all familiar with, which is great. It was also a positive interaction with the kids as opposed to ‘Sit down, be quiet. Where’s your homework?’”

Now not only is the kale apple salad district wide, it is even an option for Buffalo Public School catering.

Sadly, Taste Test Thursdays are on hold. Why? Resources. “It comes down to how much time people invest at the school level,”  said Ruth Connor, Assistant Supervisor of Menu Planning and Nutritional Data. “Even when we have a champion of the program, it isn’t necessarily enough. At School 43, for example, there was a teacher who loved the idea, but then couldn’t assist us in the cafeteria because he was scheduled for gym class when we were there.

“There are also up to four different lunch periods in schools, so it becomes a 10:30-1:30 commitment, and finding people who are free for all of that time is very difficult.”

Cheryl Thayer from the Cornell Cooperative Extension of Erie County said, “We’ve also seen interest in the program perhaps plateau or even go down a bit since we can’t do Taste Test Thursdays due to human capital. This, for us, underlined the importance of Test Taste Thursdays, which is why we are currently putting all of this effort in trying to resurrect it.”

To that end, all of the powers that be are trying to garner interest from the school and local community.“My hope is that similar to School Gardens we can find and identify staff that are passionate about eating local,” said Williams of MAP. “Perhaps they aren’t even on the school’s Wellness Committee and don’t know what we are doing, and we can meet them and they can help become our biggest cheerleaders. We haven’t hosted a big event since our initial info session, which had 150 attendees. So we are hoping that with the Farm to School Chef Challenge October 4 and the videos that we have made we can make some in-roads.”

In the meantime, all of the moving parts continue to work with the same goal: getting more of our local produce into the minds and bellies of students. There has even been a field trip out to a farm—a first for many of the students. Hopefully this trend toward minimizing environmental impact by sourcing from local growers, while simultaneously putting money back into the local communities that produced the crops, can continue to grow.