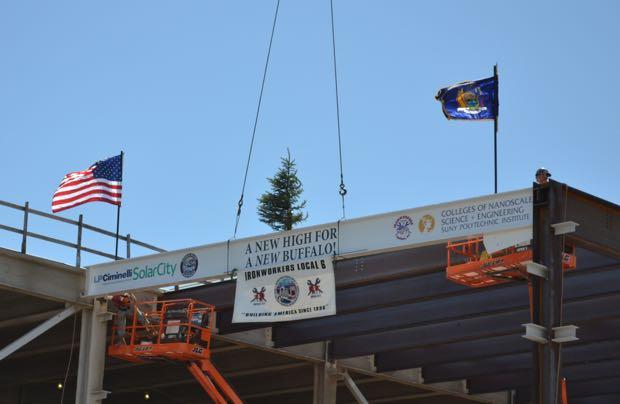 Gov. Andrew Cuomo joined elected officials, government employees and construction workers in the hot sun Tuesday as they squinted up through swirling dust to watch a crane and two workers set the final steel beam into the roof of the RiverBend manufacturing plant. Cuomo was in Buffalo to celebrate this milestone at the one million-square-foot factory built on the former site of Republic Steel, one of the city’s many extinct steel plants.

Standing at a podium positioned at one end of a seemingly endless slab of concrete that supports the structure, the governor touted the soon-to-be solar panel factory as a symbol of Buffalo’s progress: A contaminated field where thousands of people were once employed will again host thousands of workers.

“On the gravesite of the old economy, where Republic Steel stood, now rises, literally, a beautiful monument to Buffalo’s future,” Cuomo said.  “You could not have a more perfect illustration of what was, versus what can be and what is going to be.”

The site, which sat largely dormant for decades, was purchased by the city in 2008 and remediated as part of the state’s brownfield program. The companies that will use the state-owned factory are Elon Musk’s SolarCity and Silevo, a company purchased by SolarCity for its high efficiency and low cost solar-cell technology. They are slated to open next summer and expected to employ 1,460 workers within a few years. In addition, state officials say another 1,440 jobs will be created at other companies that will act as a supply chain for RiverBend. Officials hope the factory will churn out 10,000 solar panels a day when fully operational.

One concern that has been leveled by critics of the solar plant and Cuomo’s Buffalo Billion plan as a whole is that the city’s poorest residents won’t benefit from state investment, while middle class and wealthy residents will.

Cuomo, along with Buffalo Mayor Byron Brown and Erie County Executive Mark Poloncarz, stressed that people from all walks of life will be targeted to work at the RiverBend factory.

To that end, the state is also working on a manufacturing training facility in the city’s predominantly African-American East Side, which is home to a disproportionate number of people living at or near federal poverty levels.

The $44 million training facility isn’t set to open until 2017, after most of the hiring has been completed. In the meantime the state is sponsoring a training program through Erie Community College aimed at preparing people for employment at the solar panel factory.

“We can build the building, but if you don’t have the trained workforce to work in it, it doesn’t really matter,” Poloncarz said. “Because of (Cuomo’s) vision and his understanding of this region, we are coming back.”

Richard Lipsitz Jr., president of the Area Labor Federation and frequent Public contributor, said he is confident the factory will provide the jobs that political leaders have promised and that they will be filled by people living in the area.

“I’m pretty optimistic that this is going to work,” Lipsitz said.

Still, his organization must continue to work with the companies and the state to ensure that the workforce is trained in time to get the operation up and running and that these promises are carried out.

“Overall, who would have thought that this could have been possible a few years ago,” Lipsitz said. “I’m pretty comfortable saying that I think we can solve the problem. The unions will be involved in trying to solve that problem.”

While the project has created much excitement in the region, critics have also pointed out that the state had to give away massive subsidies to SolarCity. New York is investing $750 million in the operation, but will continue to own the facility and is holding the company to a pledge that it will invest $5 billion of its own capital—amounting to hundreds of thousands of dollars spent for each job created.

Rep. Chris Collins, a Republican whose district does not include the site, but is close enough for an easy commute for his constituents, said he is happy that so many jobs are coming to the region. However, Collins points to the massive investment by the state as a symptom of the unfriendly business climate in New York.

“The order of magnitude of those incentives in New York have to be much larger to make up for the fact that whether it’s property taxes or electric rates or regulatory issues (that) are so anti-business in New York state, that they’ve got to put a lot more on the table to level the playing field,” Collins said.

Another risk factor for the SolarCity venture is the possible expiration of federal solar tax credits at the end of 2016, which could send the industry into flux.

“Certainly it’s the hopes of many that they’ll be extended one way or another, but everyone in the industry admits that absent those rebates solar is not competitive,” Collins said. “New York is building a $750 million plant to make solar panels, so sure, I would be quite concerned.”

Collins stressed that the expected jobs are a good thing for the region, but said he would like to see more reforms in Albany to make the state more appealing to companies so that such lucrative subsidy packages weren’t necessary to attract new businesses.

“Until we change the environment in Albany and understand that we’re not open for business in New York, the only way we’re going to bring in jobs like SolarCity is to effectively buy them,” he said.