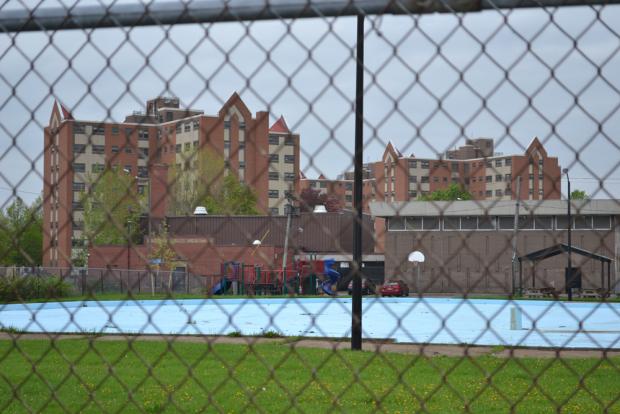 For Rashawn Pennick, home will always be the Commodore Perry projects, a series of public housing buildings just southeast of downtown.

Born and raised along Perry Street, Pennick moved out of the Buffalo neighborhood after high school, but he’s still drawn to the area to visit family and friends and to work out at the nearby Lanigan Field House. “I don’t feel comfortable going nowhere else,” he explained recently. “There’s a lot of shootings and a lot of killings going on, you know, just from people, you know, unfamiliar faces being in places where they’re not recognized. People get killed for that. I like being where I’m known, where I don’t have to keep an eye over my shoulder, watching my back.”

Instead, when he is near the Perry projects, the 29-year-old construction worker looks out for people who wear badges. Since 2006, when Pennick returned to Buffalo from a college in the Watertown area, he estimates he has been subjected to 30 “stop-and-frisk” stops by Buffalo police, where he is detained by police and searched.

Pennick, who was arrested once for drug possession in 2013 in Perry, readily admits he hasn’t helped his own cause. But he doesn’t understand why even after multiple subsequent searches have come back empty, he continues to be the object of the BPD Housing Unit’s attention.

At least three times he has been arrested by Housing Unit police for trespassing. The most recent occurrence was last year when he was visiting a cousin who lives in the same tower where the Housing Unit police and the BPD’s Strike Force, a police unit that targets gang-related crime, have an office. An officer recognized him and arrested him on the spot, he said, even as his grandmother called from a window to ask police why he would be arrested for trespassing.

The aggressive tactics put into action by the Buffalo Police Department are driven by “zero tolerance” policies aimed at cracking down on violent criminals, a principal theme of Mayor Byron Brown’s first mayoral campaign in 2006. Mirroring national trends, violent crime rates have fallen slightly over time since Brown took office, but arrests for misdemeanors, traffic violations, and other low-level infractions have skyrocketed, especially for some of the city’s most marginalized populations: those in and around public housing.

The BPD has frequently set up “general crime control” checkpoints at Buffalo Municipal Housing Authority locations, which, as we’ve reported, some legal critics have objected to as unconstitutional. But BMHA residents have also been subjected to what some characterize as dubious vehicle and trespassing misdemeanors. But police have also targeted BMHA residents with dubious vehicle and trespassing misdemeanors, experts and tenants say, citing a disproportionate focus on these parts of the city and questionable tactics used by officers.

Mike Degeorge, a spokesman for the mayor’s office and the police department, acknowledged that he received an email from a reporter listing questions on the disproportionate number of arrests by housing unit police, but did not offer a response by the time of publication.

From May 2013 through April 2014, the Housing Unit made 3,761 arrests, of which 3,329—or 90 percent—were for misdemeanors, according to an analysis of police records by SUNY Buffalo law professor Anjana Malhotra and students and professors from the SUNY Buffalo and Cornell law schools. Citywide, there were 8,624 total misdemeanor arrests during this period.

The largest share of the Housing Unit’s misdemeanor arrests—44 percent, or 1,650 arrests—was classified as “traffic misdemeanors,” which include driving without a license, driving with a revoked registration, or reckless driving. By contrast, during the same period, the Housing Unit reported that 18 weapons were confiscated.

Mike DeGeorge, a spokesman for the mayor’s office and the police department, acknowledged that he received an email from a reporter listing questions about the disproportionate number of arrests by Housing Unit police, but did not offer a response by the time of publication.

The Legal Aid Bureau of Buffalo’s criminal defense unit has grown so accustomed to defending unlawful trespass arrests in recent years that its lawyers say they are  often able to get charges dismissed as soon as they are formally presented.

Being inside of a public housing building can net one a trespass misdemeanor, but being outside on the grounds is at most a violation. And it’s “on the grounds” where the wide majority of misdemeanor trespass arrests that Legal Aid attorneys have been fighting occur. “Just because you’re in public housing doesn’t mean your constitutional rights are suddenly suspended and they can stop you, detain you, and interrogate you whenever they want,” staff attorney Rebecca Town told The Public and City & State.

And she has seen Buffalo City Court adjust to the controversial trespass charges in the wake of key rulings against NYPD on public housing. “We’ve been actively fighting those cases in court more and they do usually—when the arrest takes place on the grounds—they’re often dismissed immediately now in the courts because the judges have gotten familiar to our arguments there,” she said. This has included getting Pennick’s trespassing misdemeanor reduced to a violation.

In a telling ruling, Buffalo City Court Judge Amy Martoche agreed with Town on a case involving an unlawful trespass arrest in 2014. The decision described the arresting officer on foot patrol through 305 Perry when he encountered a man exiting an elevator. The man became uncooperative in response to the officer’s questioning, calling the officer’s intervention “harrassment.” Martoche agreed with the defense and nullified the charges, noting that “police encounters with civilian subjects must be proportionate to the concerns raised by the subject’s observed conduct.”

“The police may only escalate the encounter…and impede a person’s freedom of movement and detain or frisk if an officer has a ‘reasonable suspicion that a particular person has committed, is committing or is about to commit’ a crime,” Martoche concluded.

BPD records and court documents further document that the Housing Unit employs a vertical patrol tactic that has been called into question in recent years. In 2013, a Manhattan US District Court ruled that vertical patrols were unconstitutional in the landmark stop-and-frisk case Davis v. New York. In a settlement, the NYPD developed a new policy requiring police to file a report that justifies every such encounter with an individual in public housing.

“The BPD practices in BMHA are similar to those used in New York City Housing Authority, which residents raised in a class action against the NYPD and NYCHA,” Malhotra stated.

In Buffalo, during the period studied by Malhotra, the Housing Unit documented around 80 “walk through” and “walk up” incidents as well as a handful of actions documented as “sweeps.” “The Buffalo Police Department’s routine use of vertical patrols, walk-ups, and sweeps to indiscriminately stop and question every person they observed without suspicion violates the Fourth and Fourteenth Amendments,” Malhotra argued in an email. “Since 1968, the Supreme Court has held that the Fourth Amendment only permits police to briefly detain individuals based on reasonable individualized suspicion of criminal wrongdoing. By shifting the burden to BMHA residents and visitors to prove their innocence or face arrest, rather than requiring police to establish individualized suspicion of wrongdoing, BMHA’s trespass enforcement tactics have resulted in routine widespread Fourth Amendment violations.”

Questions about the BMHA and its police force’s use of such tactics are not new. When the contract between the Buffalo Police Department and BMHA was reaching the end of its initial five-year term and its renewal was being debated in the Buffalo Common Council in late 2014, it ran into similar opposition. “Residents raised serious concerns about a lack of security, saying that inadequate resources and aggressive tactics left them in fear of officers as well as criminals,” National Lawyers Guild attorney John Lipsitz and BMHA Resident Council chair Sam Smith wrote in a letter to the Buffalo News.

Around the same time, Buffalo News columnist Rod Watson noted that “tenant leaders say they and visitors are routinely stopped by Buffalo police for no good reason.” And in an article in The Public, Legal Aid attorney Megan Williams described BMHA properties as Buffalo’s epicenter for the controversial “stop-and-frisk” police tactic.

The focus of policing public housing and low-income neighborhoods with a “broken windows” strategy of addressing quality of life and other minor infractions has not resulted in a dramatic decrease of violent crime. Violent crime has decreased slightly, but in 2014 Buffalo witnessed 62 homicides, the most since 2009, though that figure again dropped to 40 for 2015. And, according to analysis from Malhotra and the legal clinics she worked with using FBI crime statistics and data from the U.S. Census Bureau the murder rate has gone up by nearly 15 percent from 2002 to 2015, when accounting for the city’s population loss.

In addition, Buffalo has one of the nation’s poorest success rates for solving homicides, hovering around 25 percent.

For people like Rashawn Pennick, the aggressive law enforcement tactics can make for a difficult choice: risk scrutiny and possible arrest by the police or stay away from family.

While he hasn’t had any run-ins a few months, Pennick fears every time he goes to Perry that the day might end in the Erie County Holding Center. Still, with so many loved ones living in the BMHA housing, it’s hard to stay away, he said.

This story is a collaboration between The Public and City & State, the only media company dedicated exclusively to covering New York State politics and government.