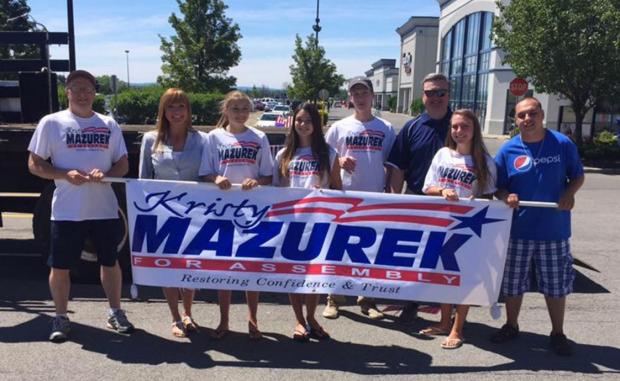 Democratic candidate for the 143th Assembly District, Kristy Mazurek, filed her campaign financials almost a week too late. Neither she nor her campaign offered a credible excuse for this delay, which is evidence either of design or negligence.

You may recall that this person is a cooperating witness into a wide state and federal probe into disgraced political operative Steve Pigeon’s dealings over the years.  This particular Assembly district has seen its last two representatives leave office in a prurient disgrace, and it’s safe to say that ethics and public integrity in Albany are big issues for voters this year.

The campaign finance illegality of Mazurek’s zombie committee, the “WNY Progressive Caucus” (AwfulPAC), has been well-documented, and it’s safe to say that its record of impropriety was not by accident, but by design. It was set up as the 2013 iteraton of the perennial Pigeoning effort; a shady conduit for Pigeon’s dirty money to be funnelled, sub rosa when possible, against candidates endorsed by Democratic Headquarters. It was the point of entry for the May 2015 Preetsmas raids which led to the MIchalek conviction, the Pigeon indictment, and whatever more might come down that pike.

Being targeted and interrogated by state and federal law enforcement is enough to spook anyone into modifying their behavior, right? As far as anyone knows, Mazurek remains the treasurer of AwfulPAC. Is it proper or legal for a current candidate for office to also be in charge of a disgraced zombie PAC?

Let’s take a look at the Mazurek campaign’s filings.

It bears mentioning here that Mazurek did not set up her campaign committee with the state until July 14th — the day before the first financial disclosure came due. This is illegal. Almost all of it is illegal.

Mazurek started campaigning over a month before she filed as a candidate with the Board of Election. She received and spent money even though she hadn’t registered herself or her committee. She announced her candidacy on Facebook on May 26th,

and held a campaign kick-off at a bar on June 8th.

She is seen in photographs circulating petitions and handing out palm cards as early as June 20th. She is seen in images on Facebook marching in a July 4th parade with a banner, campaign shirts, and other items.

Mazurek herself began collecting petition signatures on June 7th, and it appears from the BOE filings that Frank Max’s Progressive Democrats of WNY paid people to circulate petitions on her behalf in June and July. Shouldn’t her campaign disclose that spending on her behalf as an in-kind contribution? How does a campaign allow another committee to circulate petitions without coordination?

So, Mazurek has been an active candidate since late May/early June, but didn’t file until July 14th. The image above shows that she collected money from people for a non-existent candidacy in violation of Election Law §14-118(1), which requires that, “No officer, member or agent of any political committee shall receive any receipt, transfer or contribution, or make any expenditure or incur any liability until the committee shall have chosen a treasurer and depository and filed their names in accordance with this subdivision.”

So, it’s perhaps no accident that Mazurek failed and refused to file her financial disclosures until they were five days late — after Democratic Headquarters and the media began asking questions. She received the contributions shown above, but also reported these pre-July 14th in-kind contributions:

These, too, are illegal.

Election Law §4-118 states that “no candidate, political committee, or agent thereof may receive from any one person an aggregate amount greater than one hundred dollars except in the form of a check, draft or other instrument payable to the candidate, political committee or treasurer and signed or endorsed by the donor … .” But Mazurek reveals cash contributions in excess of the $100 limit from her father and her campaign manager. She also paid $500 cash to a band to play for her during the July 4th parade.  Under EL §14-118, “no candidate or political committee shall expend an amount in excess of one hundred dollars except by check drawn on the depository and signed by the candidate or person authorized to sign checks by him or in the case of a political committee, the treasurer or a person authorized to sign checks by him.”