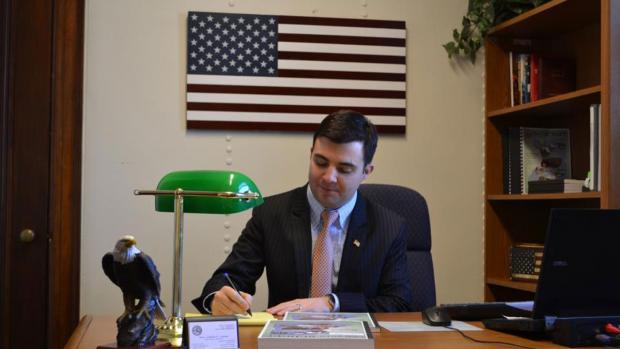 …and the Infringement Festival starts early. The first street performance of the week takes place this afternoon (Wednesday, July 22) on the steps of Buffalo City Hall, where developer and Buffalo school board member Carl Paladino is throwing a rally in support of himself.

An invitation to Paladino’s supporters, featuring a stock photo available for purchase from Getty Images of a diverse group of darling children giving thumbs-up to the camera, was disseminated on Tuesday. “Carl Paladino has been under fire lately for comments some view as racist,” it reads. “They are trying to use distraction tactics to undermine the Buffalo Schools reform Movement. Now members of the community are fighting back against these lies and distortions.”

Attendees are encouraged to bring their own “homemade signs.”

Paladino has been rebuffing charges of racism for years, while continuing to feed his critics ammunition with tirades about “the black sisterhood” and, most recently, the “damned Asians” he erroneously accused of faking residency and denying native-born Americans spots in SUNY schools. That remark spurred a social media campaign, #CanCarl. His colleague on the board, Barbara Seals Nevergold, continues to call him out for racism and sexism and general intemperance. The Buffalo Parent Teachers Organization, a relatively new body that enjoys the support of the state teachers union, joined several unions last week in condemning Paladino as a racist.

Meanwhile, the school board majority that Paladino helped to assemble continues to struggle: much bluster, few results. Its members acknowledge that they’ve failed to advance its agenda, failed to establish a turnaround plan for the district’s so-called “failing” schools, and failed in the search for a new superintendent. (Paladino’s latest favorite candidate, Harvey Austin principal Kevin Eberle, does not have enough votes.) This week the board was offered a scolding by MaryEllen Elia, the state’s new education commissioner, who showed little patience for the board’s bickering or excuses and threatened to place those “failing” schools into receivership if the board did not present an acceptable turnaround plan soon.

No wonder Paladino needs a little pick-me-up. The theater begins at 5pm. Don’t be surprised if some of those “homemade signs” are less than fully supportive of the man sponsoring a “spontaneous” demonstration of the community’s love for him.

No denim, no dialing in Erie County Legislature. Young Joe Lorigo, majority leader of the Erie County Legislature by grace of his father’s control of the local Conservative Party, passed down two edicts last month in furtherance of the people’s pressing business: first, that “[d]enim of any form is prohibited from attire of any member of Legislature or staff in the Legislative chambers during any event involving formal business of the county”; second, that “[a]ll electronic devices shall be maintained on silent or vibrate mode and any disruption caused by a personal electronic device shall be ground for removal.”

So, no jeans and no noodling with cellphones. Both measures, we are told, were precipitated by fits of pique attended by but unrelated to the banned items. The latter provoked this comment from a friend in County Hall: “Lorigo has more than once had speakers testifying before him at the Finance and Management Committee that have paused, annoyed in their silence, waiting for him to finish texting with persons unknown…In committees where he does not preside, Lorigo is famous for his snarky faces as he trades barbed text messages about his own fracturing caucus with his pal in the comptroller’s office, Brian Fiume—even accidentally indulging in a literal LOL at the amusing back-channeling.”

It’s quiet—a little too quiet. The state and federal investigation that came into public view with the May raid on the homes of political operatives Steve Pigeon, Steve Casey, and Chris Grant has gone silent. The two most dogged reporters on the affair, The Public’s Alan Bedenko and WGRZ-TV’s Steve Brown, have had nothing new in weeks.

This concerns some who have long questioned Pigeon’s fast-and-loose relationship with state election law. The investigation centers on the activities of the Western New York Progressive Caucus, a campaign committee active in the 2013 election cycle, focusing mostly on Erie County races. Its treasurer and public face was Kristy Mazurek—who is supposedly cooperating with investigators—but it was Pigeon’s creation.

The concern regards the statute of limitations: Most of the misdemeanors that investigators seem to be following have a two-year sunset; if there was any illegal activity, most of it would have occurred in August and early September 2013, before primary day. We’ve been told that investigators want to use misdemeanors to leverage testimony that will help them prove felonies; we’ve also been told investigators are willing to allow the statute of limitations on some misdemeanors to expire in exchange for cooperation or to spare some parties the embarrassment and inconvenience of being associated with the case.

We have also been told that the case has been drawn up and either has already been sent or will soon be sent to a grand jury for review. If that’s the case, where is this grand jury? Is it the grand jury already convened for general use by prosecutors in the Erie County District Attorney’s office, which has apparently withdrawn from this case because of Frank Sedita’s political ties to Pigeon and his public refusal to investigate Pigeon’s activities during the 2007 election cycle? Or is it a special grand jury empaneled to hear this matter only? Or is it not true at all?

Whatever the case, the clock is ticking.

And speaking of AwfulPAC, as Bedenko has dubbed Western New York Progressive Caucus for its flagrant and outrageous behavior in 2013, Mazurek seems to have failed to file the obligatory July campaign finance disclosure, which was due July 15. Perhaps the committee is taking a lesson from former Assembly Speaker Sheldon Silver, who, to explain his failure to file a recently required ethics disclosure form, argued that to file the disclosure while under investigation for ethics breaches might compromise his defense.