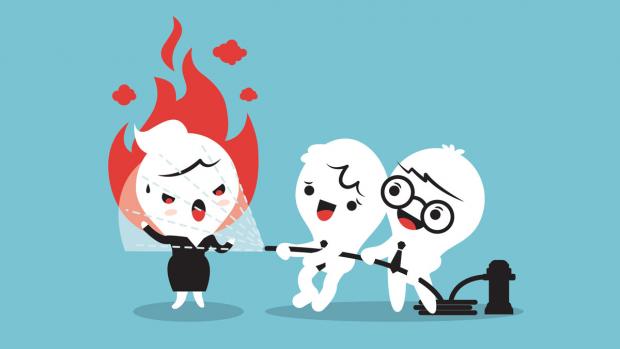 Haters gonna hate. But I sure as hell hope it’s lonely out there, teetering precariously on that frail limb.

Last week, somewhere in North Buffalo—incidentally, my neck of the woods—someone burned a flag. It was neither an American flag nor an LGBTQ pride flag, but rather, one of those hybrids that blends the two…an imagined symbol of unity.

The act of flag-burning is another imagined symbol, no doubt intended in this instance as an act of projected violence toward gays and lesbians in the wake of the US Supreme Court’s decision on marriage. In case you haven’t noticed, the Supreme Court’s action has left certain right-wing factions kicking and screaming like ill-behaved toddlers. Predictable behavior and an amusing image, for sure.

But this flag-burning nonsense isn’t amusing, nor is it threatening. It’s just lame…and maybe a little gross. Ineffective, irrational, desperate, and ill-conceived. The property damage befell a married straight couple that apparently embraces the concept of equality beyond what someone else in their neighborhood deems acceptable. Hopefully the perpetrator masturbated nearby while the flag burned, because for all the effort involved, that’s probably the most satisfaction they’ll derive from this deluded act of symbolism for the simple-minded.

The incident was effective, however, in taking me on a stroll down memory lane, recalling my initial decision to move to Buffalo and some warnings I’d received from well-meaning folks about the region’s stiff sociopolitical climate. A few horror stories were relayed to me about frustrated gays leaving Western New York over a lack of progressive thinking here, “where my neighbors clearly hated me,” and “I just could never find my place.”

Whether it be the legacy of former loudmouth mayor Jimmy Griffin and his unabashedly homophobic rhetoric, or an old-school, staunch Catholic vibe that preserves otherwise discarded family values (good) while also perpetuating rigid, outdated biblical ideals (not so good), Western New York has never been known as being particularly gay-friendly outside its own bubble.

Ironically, of the two previous cities I’d lived in as an adult, it’s Boston that felt the most dangerously oppressive. Likely a combination of the hot sun and a lot of dope-smoking, Austin was just too baked to care about much of anything other than the drought. (“Dude, it’s serious!”) Either way, I never once felt threatened about being openly gay while I was in Texas.

Right on the outskirts of Boston, however, as recently as 2011, a car flew past me, soaking me with water from a high-powered squirt gun while drunk college guys gleefully yelled “Faggot!” out the windows. That same year, a 20-something became irate with me for telling his girlfriend to quiet down at a concert. (She was apparently having a very bad day, punctuated by her hair’s ongoing misbehavior.) The logic that I hadn’t forked over $60 to listen to her insufferable, vocal-fried whine was completely lost on him—and then suddenly it was about being gay. “You fags want to come to shows and be able to hear a pin drop,” he asserted. “It’s wrong, and that’s not what concerts are about.” When the lights came up, he took on a menacing posture and followed closely behind my friend and me to the venue exit. “No apology, no nothing, faggots?” he bellowed. I feel like there are so many places where this behavior would have been shamed by others nearby. But not in Beantown.

A number of years prior, a gaggle of kids on BMX bikes simultaneously spat on me as I turned a corner to enter a neighborhood tavern with a largely gay clientele. That they weren’t white was the last thing on my mind—all I could think was that flu season was underway as I stood there, stunned, mucous dangling from the hinge of my eyeglasses.

Boston also called me on the carpet for being gay when I publicly dismissed American Idol winner Taylor Hicks as a marginal talent. At the time, I was the lead music critic for the Boston Herald, and so I received my share of hate mail. But Hicks’s unforgiving fan faction, a.k.a. “The Soul Patrol,” discovered I also wrote for some LGBTQ publications. Less than 24 hours after my review ran in the paper, sexuality became part of why my opinions were worthless and the ensuing hate mail took on an aggressively homophobic tone.

Given what I’d endured in super-gay Boston and the comparative silence in super-homophobic Texas, I decided I didn’t give a shit about any well intentioned warnings. You never know what you’ll come up against in a given city. So I came to Buffalo anyhow, and I’m glad I did. This isn’t the Wild West. Nobody comes galloping along, firing rifles and wielding lassos to drive gays out of town. The gays are everywhere here —on our police forces, teaching in our schools, on our town boards, and attending our churches. We’re like the finely chopped bell pepper in your fried rice. Try and pick out each piece and when you’re finally ready to eat the rice is cold and your cohorts are staring, incredulous. Who’s the odd one out now?

Hey, flag-burning superhero, it’s time to grow up and eat your veggies.

“I’m homosexual and I’m afraid about what my future will be and that people won’t like me.” pic.twitter.com/LsErH02zrK

Juxtaposed against this incident in North Buffalo was a Humans of New York photo published just days earlier (July 3) of a teary-eyed kid. The caption read, “I’m homosexual and I’m afraid about what my future will be and that people won’t like me.” The photograph sparked an unprecedented volume of reactions through social media outlets. Even Hillary Clinton chimed in with words of encouragement for the troubled lad, as did Ellen DeGeneres and George “Oh My!” Takei. To date, the photo has been “liked” by nearly 700,000 people, shared more than 63,500 times, and has yielded more than 61,000 near-universally positive comments. Granted, Humans of New York has close to 14 million followers worldwide, but those are significantly higher numbers than average and, most importantly, I bet this kid is feeling better about what lies ahead.

Media bulldog Rush Limbaugh barked that the photo was little more than a Clinton campaign publicity stunt. Stranger things have happened, but it seems unlikely to me that an arts entity so focused on uniting people through our notions of interconnectedness and humanity—our enduring common denominator—would be so easily bought.

Even still, outside the negative ramifications for Humans of New York and Clinton’s campaign, what would it mean if Limbaugh was right—that making nice-nice with the gays can secure your spot in the running? That we’re educated and intelligent folks who carefully consider candidates and actually vote? That there are enough of us out there to count for something? Those all seem like positive attributes to me. We’re important enough that we’re worth lying to. It could be a lot worse.

Meanwhile, things are a little strange with regard to SCOTUS aftershocks. Hate has gotten a bit louder but not much brighter. The ever-brilliant Mike Huckabee is babbling nonsensically about “biblical disobedience,” Ted Cruz is busy butchering the definition of “judicial activism,” and Bill Kristol thinks we’re on a reckless rocket-ride to okaying polygamy.

Haters with power are attempting to use it. Last week, Kansas Governor Sam Brownback signed an executive order to uphold “religious liberty” in the aftermath of the high court ruling—likely the first of many. Clerks have resigned in Texas, Tennessee, Florida, Mississippi, and Arkansas to avoid engaging in the process of same-sex marriage. Their decisions may not seem nearly as righteous down the road a ways when the unemployment runs out.

Less powerful folks are left to silly-seeming acts of defiance, including some pretty entertaining YouTube rants. And in North Buffalo, somebody burned a flag. Perhaps they succeeded in upsetting the homeowners and caused some unrest between neighbors. But the reality is that there’s really no place for that here. Not anymore. And that’s what people were trying to help the young man in the Humans of New York photo understand: Hate is in the minority. It won’t be tolerated. It may have run the show at one time, but it doesn’t anymore. What we’re witnessing—the kicking and screaming—is a false idealism running on fumes.

Hate is what’s being run out of town.