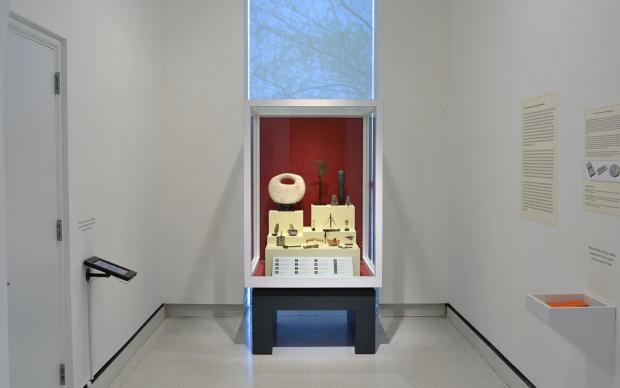 A small but excellent art and anthropology exhibit on tools from the present time back to the Bronze Age is currently at the UB Anderson Gallery. The exhibit is by UB students pondering careers as curators. The score or so of tools they studied, interpreted, and expounded are from the gallery’s Annette Cravens collection and range from an Assyrian (current day Lebanon) bronze war axe dated 2000 to 1600 BC, to a 19th-century-AD Chinese cricket cage, to a 19th- or 20th-century-AD Ethiopian earpick. Just what it sounds like. A little silver spoon with elegantly designed metalwork handle. In addition to its primary functional role, the earpick could be—likely was—worn as jewelry.

The title of the exhibit is Our Own Devices. The exhibit items are under glass, and off to the side is an emphatically modern-day device, a computer tablet with thumbnail pictures of the exhibit items. You tap one of the thumbnails and get a larger image and write-up on the item and related historical information from the student who studied it. The write-up on the cricket cage talks about historical cricket culture in China. The prevalent appearance of crickets in Chinese poems and songs back into the BC era, and from the seventh to 10th centuries AD, crickets were kept in cages for their song, the way we keep canaries. While from the ninth century to the present, they were kept for cricket fights, and betting on the fights. Such is the primary cricket custody usage in modern times, except for a brief period when gambling was outlawed by the People’s Republic of China. But the traditional cricket culture has now rebounded. According to the student writer, Brian Dickinson, 10,000 crickets are sold every day in Shanghai.

The cricket cage is of ivory and is engraved on the top panel with an image of a fly fisherman in mid-cast. (Or more likely, cricket fisherman. One more cricket existential hazard.)

A wall text overview essay talks about how tools have changed human lives—think of the computer in our own lives—and how we need to expand our definition of tools to include not just items we use to perform tasks we couldn’t perform—or not as easily—without them, but things we use for social or spiritual purposes. Among the exhibit items are no less than four axes, some of which were never used or intended for ordinary ax uses. One is a dance hatchet—a prop for certain communal dances—from Cameroon, dating from around 1900. Another a small carved jade axe-god pendant, from Costa Rica, from somewhere between 500 BC and 900 AD, worn to indicate the wearer’s social status and family connections.

Another item is a ulu, an ivory and chert Tlingit culture hand knife—it looks something like a box cutter—used in the production of sea mammal hide clothing and boat coverings as well as food preparation, made somewhere between 300 and 500 AD.

Another is an aghamad, a thorn remover, from Niger, 20th century, a kind of pocket carry multi-tool, like a crude version of a Swiss Army knife. (Maybe this where the Swiss Army got the idea.)

And a jeweler’s mold, from India, 17th century. A little strip of gray metal indented with little floral pattern depressions into which one would pour some molten material—maybe molten glass, maybe another metal—to set and harden and then remove. In an offshoot project, some of the students have created larger-scale plastic facsimiles of the jeweler’s mold, as teaching tools for K to 12 pupils. By initial careful measurements, then photos, then data transference to Auto-CAD apparatus, and ultimate creation of the facsimile items with a 3-D printer. Molds to use with clay or plaster of Paris.

The student project is in the alcove across from the Cravens World regular exhibit. An accompanying world map shows where the different items originated from. Annette Cravens went everywhere, just about.