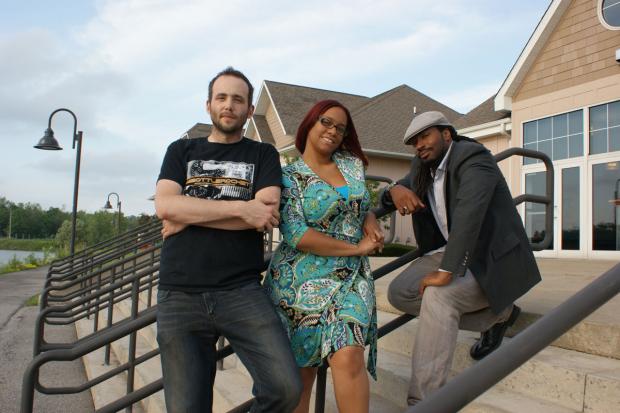 I thought I understood and loved poetry until the night I walked into the Gypsy Parlor for Pure Ink Poetry’s monthly open mic and slam.

The stage was steeped in intimacy. The crowd fed on the energy that radiated from the poets as they poured their hearts out to strangers. A cappella had a new definition; poetry evolved from the world of academia to a realm of artistic expression. Poetry was a concept I thought I understood until I witnessed it in action.

“Pure Ink Poetry is a resurgence of poetry in the community,” says the founder, Brandon Williamson. He describes Pure Ink as a collective and a slam, “a new place for people to share their voice in a competitive setting.”

In addition to Williamson, the Pure Ink team includes slam coordinator Bianca McGraw. After the Em Tea Coffee Cup on Buffalo’s East Side decided to discontinue its open mic, Williamson decided it was time to create the slam, veering off from the traditional open mic by adding a competitive element. The cover charge for the event goes to the champion of the night. Williamson hopes to turn Pure Ink into an LLC in the near future.

Pure Ink hosts both an open mic and poetry slam each month. The Pure Ink Poetry open mic happens every second Sunday of the month, and the slam takes place every fourth Sunday at the Gypsy Parlor on Grant and Potomac. For the slam, poets have three minutes to recite a poem. No props, no instruments—just themselves, the microphone, and their words. The poets are judged by five random members of the audience, using a scale from zero to 10. The no repeat rule, which dictates that poets cannot recite the same poem within three months, keeps the creativity flowing and encourages participants to keep writing and performing new pieces.

Poets from all walks of life participate in the slam. One of these is Ben Brindise, who has been dubbed one of Buffalo’s best local poets and is an avid attendee of open mic nights throughout the city. With a background in fiction writing, poetry started out as an obligation in the classroom. These classes did poetry no justice for Brindise; he had to witness the literature come to life on the stage, transformed into a visual and auditory means to communicate.

Pure Inkers take poetry to a new level. Forget everything you learned in your literature class, where you were forced to read scholarly interpretations—after attending a slam, you’ll want to get up and write, or change the ambiguous and sometimes highbrow stigma that follows poetry.

For Pure Ink participants, the slam serves as a literary transition from the paper to the stage. It brings poets’ words to life. It creates a shared consciousness among a group of artists.

McGraw describes poetry as a lifeline. For her, poetry in academia was difficult to connect with. Listening to poets express raw emotion changed her life—she found in it an emotional bond and an art form.

Williamson’s poems are infused with all sorts of elements, from comedy to frustration and romance. One of his favorite poems, “Life Changing Experience,” became a marriage proposal to his wife.

Williamson experiences poetry as a way to bring someone closer to the situation he is going through. He once told a poet, “We as poets are all broken, but maybe you have the piece that can help put someone back together again.”

Williamson finds value in sharing a story with people who are willing to listen.  But the value doesn’t end there; he says that to witness the nonverbal confirmation that his words have touched a member of the audience is thrilling.

Pure Ink is trying to raise $4,500 to fly out to California for the National Poetry Slam. The last time Buffalo attended nationals was in 2008. Williamson hopes to bring national recognition to the art and poetry scene in Buffalo—recognition he feels is well overdue.