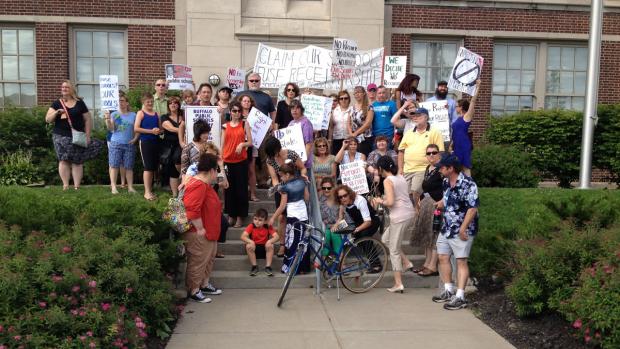 On June 23, one week after the Board of Regents released its proposal for the Implementation of Receivership in Struggling Schools, a crowd of public education supporters gathered on the steps of the Buffalo Elementary School of Technology (PS 6), rallying to “Reclaim Our Schools: Refuse Receivership,” in the words of one banner.

PS 6 is one of 14 Buffalo Public Schools targeted by Governor Andrew Cuomo’s Failing Schools Report as “persistently failing” since 2005-2006. Over the years, many have bristled at the designation “failing”: Are the schools failing the state, or is the state failing the schools? In response the Board of Regents has relabeled them “struggling”; the consequences remain the same.

“Persistently struggling” schools, under the proposed plan, will be given one year under the receivership of the superintendent—a position which, at the time of this writing, the Buffalo Board of Education hasn’t filled—to turn around.

Should the school fail to demonstrate acceptable results, it “may be placed in independent receivership for three years,” according to the Board of Regents. Schools which haven’t been “struggling” for 10 consecutive years face the same fate, although they have two years to improve under the superintendent/receiver.

Boardmember Dr. Barbara Seals Nevergold, who spoke at Tuesday’s protest, called the stipulation that schools be turned around in one year “a built-in mechanism for failure,” based on “unrealistic expectations” set by bureaucrats in Albany.

Invoking civil rights activist Fannie Lou Hamer, Nevergold said that she is “sick and tired that our children are forced to take one-size-fits-all standardized tests, that aren’t even developmentally appropriate, but are used anyway to label our children as struggling or failing.”

Nonetheless, the independent receiver has broad power to hire, fire, force staff to reapply for their jobs, change the budget and curriculum, overrule the Board of Education, expand the school day or year, convert the school to a charter school, request changes to the collective bargaining agreement, and convert the school to a community school. She or he is appointed by the state education commissioner and may be fired at her discretion.

Tyler Norfolk, a student at Math Science Technology Prep, picked up the theme of bureaucratic meddling in local affairs, criticizing the state education department for its lack of intimate knowledge of Buffalo schools:

“We don’t have [the state education department] inside the schools to actually see what is going on. They are just saying things off the top of their head: ‘This school is failing, that school is failing.’”

“Leaders need to know that we need to be informed and consulted,” added Janine Schuster, a teacher at PS 6.

In fact, the Board of Regents appears to have heard some of the complaints from education professionals, and has made several updates to its initial draft proposal in the most recent proposal. Among the revisions include a greater focus on “engagement of parents and local communities.”

Schools activist Dino Lawvere pointed out that, in addition, the Community Engagement Team members must be “approved by the [state education] commissioner [to] carry out the commissioner’s plan.”  Members may also be “removed” by the commissioner.

The Board of Regents will accept public comment for 45 days following the publication of the final proposal on July 8.  At the Board of Regents’s September meeting the “proposed rule will be presented for permanent adoption.”

Given the massive dissent faced by the state education department during the most recent round of Common Core opt-outs, and its stubborn decision to not make any meaningful changes, the fate of the “Refuse Receivership” campaign is uncertain; indeed, it remains to be seen what the precise dimensions of a “refusal” entail. Nevertheless, activists were cheered by the prospect of unification and defiance.

“We reject the idea that we’re the problem; we accept the challenges before us,” said Dr. Mark Garrison of D’Youville College.

Buffalo Teachers Federation president Phil Rumore suggested that the union is eyeing the judicial route. He asked union members, who are placed in the schools designated as failing, to “make a list of every single thing you need: class size of 10, special education teachers, [English Language Learners] teachers, etc.”

He continued, “You’ll have that list and what we’re going to do with that list—I’m asking members all across the state to do this—we’re then going to go to court, and we’re going to say, ‘State ed, state legislature, this is what you want us to do, fine, you don’t give us the resources to do it, don’t blame us, blame yourselves.’ They’re the ones that are underfunding our schools.”