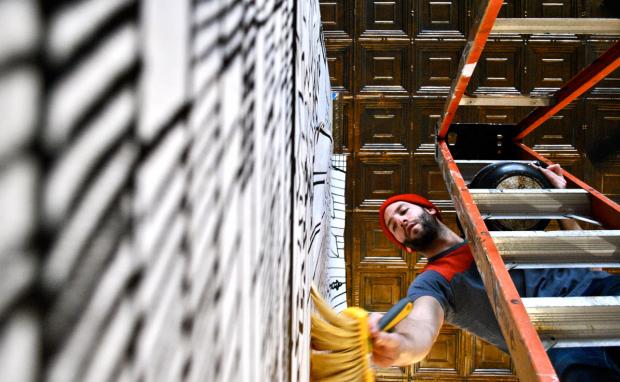 For months they’ve kept it quiet—their plans, their renovations, even the name of the space. A sign on the doorway at 218 Grant Street, adjacent to Sweetness 7 cafe, reads “Secret Storefront.” Where most businesses list their hours, there is a sign that says, “Open Spontaneously.”

But now the secret is out. On Thursday evening, the newest addition to Grant Street’s burgeoning cultural and commercial scene will debut with a bona fide street party: music, art, dancing, drag queens, even a lemonade stand at West Side Stories, the bookstore across the street. (Naturally, The Public will be there, too.) Welcome to the Pop In, the brainchild of Casey William Milbrand and his partner Jason Lloyd Clement: part cafe, part artist studio, part community center, part cooperative work space, part whatever can be conceived by anyone who wants to use the space creatively to contribute to the wealth of Buffalo’s cultural life. It’s programmable space available to anyone with a bright idea.

How did this polymorphous venture come about? The story begins with chance encounter.

Milbrand, a Buffalo native, met Clement at the National Historic Preservation Trust’s conference here in 2011. Milbrand had left town to pursue an architectural career first in Chicago and then in New York City, but had recently returned and immersed himself in the city’s arts and preservation culture. Clement, who worked out of the trust’s DC office, helped to create Buffalo Unscripted, a feature-length documentary film about the city commissioned specifically for the conference.

At its premiere, Milbrand spotted Clement pacing nervously outside the room in which 500 people had gathered. “I had never been to Buffalo, really didn’t know anything about it, when we started filming the project,” Clement says. “We had no idea what we were doing.”

His nervousness was justified: Buffalonians can be unforgiving of outsiders who try to explain their city to them. But, in the course of interviewing hundreds of people, exploring the city’s history, and making friends among the city’s young and creative set, Clement fell in love with the place. And eventually with Milbrand, too. “After the conference I kept coming up with reasons to come back here,” he says. “I probably came here 10 times on vacation or just to catch up with people. It’s funny…I used to say that this city would never let me go until I just moved here. And now I’m here.”

Milbrand and Clement carried on a long-distance relationship—Milbrand in Brooklyn, Clement in DC—but they often met in Buffalo, too. Both felt the city calling them. They just needed a project to hang their hats on. That was happily provided by their mutual friend, Prish Moran, proprietor of Sweetness 7 and a certified cultivator of talent and energy. On New Year’s Eve 2013, Moran advertised on Facebook that she was ready to rent the tiny storefront next to the cafe to anyone with a good idea for just $500 a month.

Milbrand jokes that at first he was irked: “Why didn’t Prish tell us about this when we saw her the day before? She knew we were looking to start some sort of business here—probably eventually a cafe or a bar—so why hadn’t she said something?”

They’d never seen the space before, never set foot in it. The idea of a free-form space was germinating but had not yet taken form in their minds. Nonetheless, they wrote to Moran at once and rented it. “It created this sort of whirlpool effect where we got sucked back into the city,” Milbrand says. “This storefront kind or presented a moment for us—we needed a sort of anchor for ourselves here.”

“We actually rented this space before we had a place to live here or made plans to actually move here. It was a spur-of-the-moment, why-not thing,” says Clement. “We knew we needed to do something here—to be creative ourselves and to contribute to the city. For both of us, this is not a business. On paper, this makes no sense. But in our hearts it’s a passion project—it makes total sense. It also represents something that we never could have done where we were living. I lived in Washington, DC for 12 years. Casey lived in Brooklyn and Chicago. We never would  have been able to afford to do something passionate and crazy and weird like this. There’s too much of a barrier in those cities.”

They’ve already got plenty of proposals for uses of the space: West Side Stories will use the space as a reading room for kids. In July, a photographer from LA will use the space as a studio in which he’ll make portraits of 3,000 new Americans—part of his nationwide project to photograph 100,000 new Americans. People have asked to use the space for salsa and yoga lessons. Once a month, Clement and Milbrand hope to give the keys to a local artist for one week, then exhibit the work the artist creates in that week. For their part, they hope to use events and merchandise designed by Milbrand to help fund a series of outdoor murals, three or four per year. The first such cycle—T-shirt sales, event, mural—will be based on the “Buffalove” mural Milbrand has painted on an interior wall now.

“The point is to program the space in a way that does something for the city and gets people engaged in an exciting way,” Milbrand says. “We know people are going to give us ideas. I’m interested in a year from now, when we look back and say, ‘We had no idea that was going to happen in the storefront.’”

Join The Pop In and The Public for their grand opening on Thursday, June 25th!