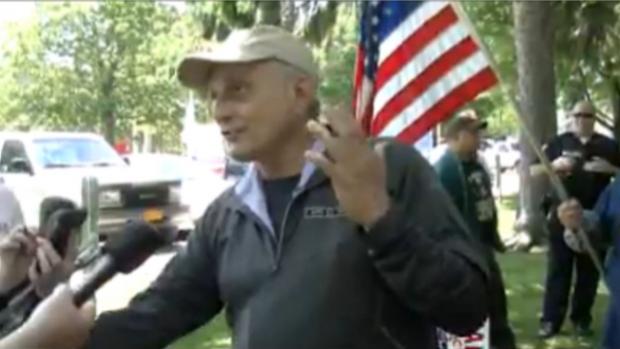 Carl Paladino is a misomniac; he hates everything. Well, maybe that’s not true. He hates most things, though. He hates liberals and the media and gun control and Brian Higgins and…for a guy who has $150 million in the bank he’s quite the grouch. If I had that kind of scratch, I’d have the sunniest disposition, ever.

But Carl’s having something of a bad week. There is, of course, the Public Accountability Project’s series exposing Paladino’s demeanor, behavior, and connections. Also, at a recent ammosexual rally in Olean, Carl said some really factually incorrect and hateful things to some reporters about international students at UB — especially the “damn Asians”. He later apologized, amazingly enough.

Paladino’s original argument had been that international students at UB take opportunities away from in-state students, and that they somehow connive to claim New York residency after their first year of studies in order to pay a heavily subsidized in-state tuition.

UB responded that this was impossible, since 99.2% of international students are here on a temporary student visa, thus leaving them legally unable to claim any sort of domicile in New York. In subsequent missives, Paladino has effectively recanted his apology. Consider this story from WGRZ, and this response:

More about this re-framing of his argument (and victimhood) in a second. He then posted a note he received from attorney James Tresmond, praising Carl and attacking the press, and later included some comments he received from random people.

It bears mentioning — repeating? — that Carl Paladino and his right-wing talk radio ilk are a dying breed. Fueled by misinformation and animus, they expertly don an unearned, false mantle of victimhood. They are ignorant, xenophobic, racist, people who examine their own lives and need to blame someone for something — they look at Buffalo and WNY and decide that the real culprits are those who wield the least power. They blame immigrants and minorities for real and perceived ills, regardless of the facts. Coming from someone whose own parents are immigrants, that sort of childish mindset is especially sinister.

Buffalo and WNY aren’t perfect, but such a place doesn’t exist. Blaming immigrants is stupid — we should be welcoming them and their talents and experiences with open arms. They’re here to work, not to mooch. To repeat what the International Institute’s Eva Hassett said,

Immigrants, refugees, international students, foreign born professionals are are critical to the region’s economic growth. International students in particular are more likely than native born students to study in STEM fields, which relate highly to making the investments in the BNMC, Solar City, etc turn into jobs. Lots of cities get this. What they also get is that communities need to be ‘welcoming’ to the foreign born, or none of their other strategies work. Being inclusive and tolerant is a great base for an economic development strategy. Not to mention making it a nicer place to live.

What foreign-born physician or scientist is going to want to work in Buffalo’s fledgling knowledge-based industries if there’s some rich, powerful fossil yelling hateful things about them? What refugee is going to find safe harbor here among our small-minded loudmouths? Elon Musk — a South African by birth — is opening a new plant in South Buffalo in spite of our provincial xenophobia, not because of them.

But as far as UB is concerned, Carl Paladino’s reactionary xenophobia is false. UB has already said that it is complete fiction to allege that international students displace New Yorkers. Of the 5,000 international students attending UB, 99.2% of them pay cash, and they’re here on an F-1 visa; they’ll never get in-state tuition. I also confirmed with UB that the out-of-state tuition Paladino cites above represents the unsubsidized actual cost to attend the school. Comparing UB to Canisius or any other private university is wholly unfair.

Let’s examine the comments he approvingly re-posted and endorsed.

You are 100% right on this issue. I have been told that many SUNY graduate programs are almost entirely filled with foreign and non-resident students. They justify this by saying that without these students, they would not have enough students to make the programs viable. This I’m sure is not true, but the cost to these students is a real bargain and subsidized by us.
Keep ‘Hammerin em’!
Ray

It is not “subsidized by us”. On the contrary, these international students pay the full cost of their education — in cash — and they have an incredible positive impact on the local economy. This mindset that the inclusion of an international student represents a state subsidy or displacement of a local hopeful is simply false.

But that sentiment is hardly as bad as this:

Not just Asians and Indians but S. Americans, Mexicans, Middle Easterns, Africans, just about anybody that comes here and DemoRats want to make them their voters. They get priority of all our benefits while we work our butts off to make ends meet and send our kids to school.   My and your taxes are paying for them and we keep on getting left back at the end of the line.

That’s some laundry list of brown people that Rosa considers to be moocher-takers. I don’t know exactly what “benefits” an international student on an F-1 visa can claim “priority” for on Rosa’s back, but facts don’t matter when you have blind hatred on your side.

This policy affected my son, a prospective med student at Georgetown. He was told by the interviewer that there was a significant percentage of foreign students that had to be placed at Georgetown, which, of course, drastically reduced the number of American students who had tax paying parents.  Very disheartening.
Anne

Georgetown is a private university. To call this anecdote irrelevant is a vast understatement.

AMEN, welcome to the liberal-owned media. Thanks Carl, for being real/honest/and direct.
Father Joe.

Yeah, AMEN because how dare the liberal media quote your own words verbatim, Carl!

Hang in there Carl-we know it’s just your passion for Western New York speaking. Too bad the media is not as passionate in the integrity of their reporting. I’m with James Tresmond, who is a true gentleman, all the way. Keep up the fight for us Carl.
Sincerely,
Jim

See, Carl might have said something really hateful and ignorant, but his heart was in the right place — he loves WNY, just not all the people who live in it, if you know what I mean. Especially that pesky media again, writing down things you say. Who do they think they are?!

I completely agree….keep up the good work. As a long-time resident of the area around UB’s South Campus I can assure you that UB spends a lot of money putting a positive spin on any bad news coming at them….in other words….they speak with a “forked tongue”……!!
Fred

Or, you know, pushing out facts to rebut wholesale falsehoods. Tomato, tomahto.

One common refrain is that Paladino is generous and thoughtful in his private philanthropy. That’s laudable, if true. It does not, however, excuse these sorts of knee-jerk mouthnoises.

The real tragedy is that Paladino’s companies are doing some really good things locally, and they would — themselves — endear Paladino to people. All of this sound and fury not only signifies, but accomplishes nothing.

There are no winners here. All of this — and especially Paladino’s continued support in the community — reflects poorly on Buffalo and western New York.