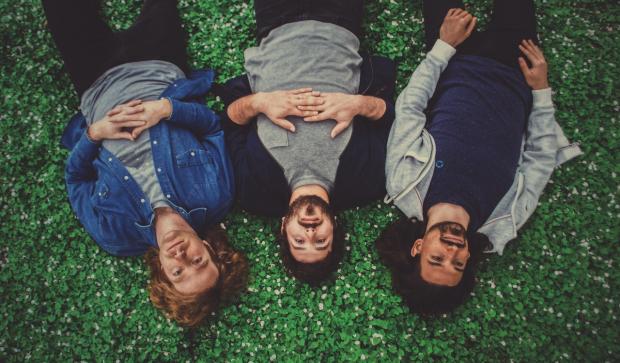 For the past six or seven years Binghamton-bred, Buffalo-based indie rock trio, The Tins have garnered national attention for their unique sound. Their rhythms channel the ghosts of 1960s psychedelia, early 2000s indie folk euphoria, and many other musical voices. They have been a growing force of local music scene for awhile and are on a even bigger roll as of late.

They have garnered attention from widely recognized sources. Magazines such as USA Today have described them as a “brilliant pop exuberance” and NMEhas dubbed them “extraordinarily moving.” However, their sound goes far beyond critical praise. For any genuine music lover, it’s the variety pack of sound they inbox to open seas of music lovers.

Right now the band—keyboard player and vocalist Mike Santillo, drummer Dave Muntner, and guitarist/vocalist Adam Putzer—are on a mid-Atlantic/East Coast tour, but will return to Buffalo to perform at the Elmwood Village Association’s free Picnic in the Parkway concert series on Tuesday, July 10. To add, The Tins have a new self-titled LP that was just released and, well it is incredible. Despite the band’s busy schedule, guitarist and vocalist Adam Putzer made some time to sit down for a chat. This week, we spoke with Putzer about the growth of the band, their latest studio work, their tour, and oh so much more.

Thank you so much for meeting with me today. So for those who may not have heard of The Tins, care to share a brief story of how you all came to be?
The band started in college. We all went to Binghamton University. Mike and I met through a mutual friend, and Mike had recorded some material of his own that impressed me, so we started working as a duo. We met Dave not long after at the local practice space, rehearsing drums with some other dude who did not end up in the band. After cycling through various other members, we decided, as the band’s writers, to stay in Binghamton over the winter break and work on material. That’s when we discovered we were better just as a trio than with anyone else, and it’s been that way for almost ten years now.

Your music definitely includes a variety of genres, which artists would you say have influenced you each the most?
We all have differing tastes in music, so I can only speak for myself. As far as my formative influences go, The Beatles, REM, Bob Dylan, The Rolling Stones, The Strokes, and The Who, among many others. However, I also think it’s important to keep up with modern acts as well. Right now, I’ve really been into Frank Ocean, Father John Misty, and Parquet Courts.

I also heard that the LP you guys just released was produced by Robby Takac of the Goo Goo Dolls, and the album art was done by Rolling Stone cover artist, Philip Burke. What was it like working with such names in the industry?
Before we started, I was certainly intimidated by the level of talent that we were working with. Both Robby and Philip are extremely gifted and talented, and I’ve always had issues with my perception of my own abilities. Once we started though, both guys could not have been nicer or cooler. Robby really showed me how to hone in on the little details, things that make an arrangement pop. And it was such an honor to be painted by Philip. He was so chill, but once he got working, he was extremely focused.

With the self titled album coming and kicking off a Mid-Atlantic/East Coast tour in the same time frame, what could first time listeners or concertgoers expect from The Tins? And how do you think longtime listerns will react to the new reocrd?
Well, as far as the music goes, we always try to do something a little different for each album. That’s a bit of the Beatles influence coming into play. We never want to sit still, to continue evolving. This record catches us at a certain point in our journey that we haven’t been to before, so there’s an element of surprise to the sound. Also, it’s been interesting to craft a set for this tour, seeing how these songs fit into our larger body of work. In the past, we’ve focused largely on new material, but for this run we really want to try to encompass our whole careers, hitting on various points. We want the audience to come on that journey with us, and hopefully they enjoy experiencing it as we did creating it.

Don’t forget to check out their latest self titled album. To get a full list of upcoming tour dates, please visit their website.