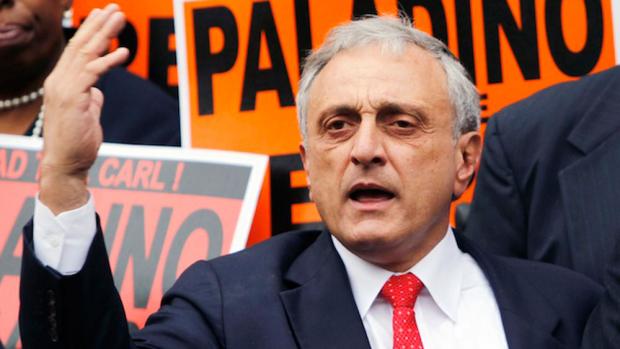 [Editor’s note: This is the second installment in a multi-part report about Carl Paladino by the Public Accountability Initiative; PAI’s Gin Armstrong created the accompanying video.]

Paladino has given to vast majority of WNY elected officials

Paladino donations split along racial lines, not party or ideology

While Part I of this report reviewed Buffalo developer and school board member Carl Paladino’s long history of racist, sexist, and homophobic comments, Part II examines Paladino’s political network. We look specifically at the politicians who accept significant sums of Paladino’s money – and help protect his influence.

Paladino has protected his interests and maintained his influence by donating heavily to politicians, be it individually, through his PAC, or through the dozens of LLC subsidiaries of his company, Ellicott Development. PAI found that Paladino has made nearly $3 million in campaign contributions since 2000, mostly to his own unsuccessful run for governor, and otherwise primarily to other white male candidates. Though he is a Republican and frequently attacks Republican supporters of Democratic candidates (what he calls “RINOs,” Republicans in Name Only), Paladino appears to split his political donations along racial, rather than party lines. For example, we found that Paladino has donated to every white member of the entirely Democratic Buffalo Common Council, but we have not been able to identify contributions to any of the black legislators.

PAI analyzed data from the New York State Board of Elections and the Center for Responsive Politics to find campaign contributions made by Paladino, his Turning Albany Upside Down PAC, and by Ellicott Development and its myriad subsidiary LLCs. As Paladino’s influence is centered in Western New York, our analysis is focused on his donations to elected officials and candidates from this region, and specifically legislative and executive branch officials representing Buffalo and Erie County. Paladino’s donations to various PACs and party committees are also omitted for the purposes of this analysis, as are contributions from Paladino family members.

We aggregated Paladino’s donations from 2000 through 2015, and report contributions both since 2011 and since 2000 to show how Paladino’s relationships have developed and broken off through time.

Carl Paladino has given a total of $260,499 to 35 out of 41 federal, state, and local politicians representing Western New York

Of the nearly $3 million Paladino has donated since 2000, he has given $260,499 directly to the politicians representing Erie County at the federal, state, and local levels. This largesse has garnered Paladino considerable influence with local policymakers – 35 of 41 elected officials from the City of Buffalo, Erie County, New York State Legislature, and in the House of Representatives have taken Paladino’s money.

Table 1 below shows Paladino’s top ten all-time political donation recipients. All ten recipients are white males and, as can be seen in this and in subsequent tables, come from both major political parties. Despite routinely attacking Republicans who support Democratic candidates, Paladino does not discriminate based on party when it comes to securing influence via political donations.

The tables of donations show that Paladino has not donated to any current black members of the Buffalo Common Council or the Erie County Legislature, though he has donated to every non-black member of each legislative body. Paladino has donated in the past to current Assemblywoman Crystal Peoples-Stokes, though he made all of these donations from 2000 through 2002, when he was a registered Democrat. Apart from Peoples-Stokes, the only black Western New York representative that Paladino has donated to is Buffalo Mayor Byron Brown, who has received just $450 from Paladino since 2000, and just $100 from him since 2011.

Notably, Assemblyman Sean Ryan, the only white elected official in our analysis who appears not to have received contributions from Carl Paladino, his network of LLCs, or his PACs, received a $500 donation from Paladino’s son William.

Coming next week: Part III of this report will examine Paladino’s business relationships with a focus on the developer’s significant tax subsidies and income from government leases.