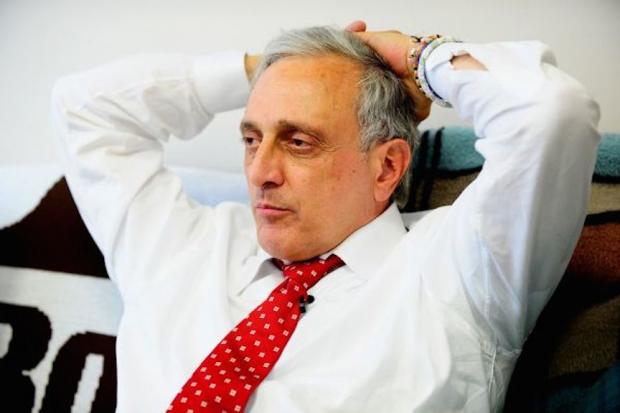 [Editor’s note: This is the first installment in a multi-part report about Carl Paladino by the Public Accountability Initiative; PAI’s Gin Armstrong created the accompanying video.]

At a June 2015 political rally, Buffalo developer and school board member Carl Paladino made a series of racist and xenophobic remarks. Paladino complained about “non-Americans” at the University at Buffalo campus and the “huge population of foreigners.” In comments to a group of reporters, Paladino blamed “those damn Asians coming here to go to school” for keeping local students from educational opportunities. Since then, the University at Buffalo and local media outlets have debunked his assertions, in addition to highlighting the racist nature of his remarks.

This is just the latest in a long line of outbursts from Paladino, whose tendency to make racist, sexist, and homophobic remarks earned him a national media profile during his failed campaign for governor in 2010.

Despite these views, Paladino continues to enjoy considerable influence in Buffalo. He is one of the city’s wealthiest developers, with personal wealth of $150 million and a real estate empire worth $500 million, according to a New York Times estimate from 2010. He is one of the region’s highest profile media figures. He is a significant beneficiary of government subsidies and leases, and one of the region’s most prolific political donors. And in 2013, he won a seat on the Buffalo school board, a frequent target of his criticism.

This report, which will be released in parts, reviews Paladino’s history of making hateful statements and examines the web of relationships that help him maintain a prominent place in Buffalo’s power structure. Part I, which covers his history of racism, sexism, and homophobia, and which includes a video of some of his most troubling remarks, is below.

Part I. Paladino’s history of racism, sexism, and homophobia

In addition to his recent remarks about Asian UB students, Carl Paladino has a long history of making racist, sexist, and homophobic remarks. These statements have drawn some criticism, especially when he was in the national spotlight as the Republican gubernatorial candidate in New York. But they have not diminished Paladino’s local influence, and few political, business, and media leaders in the region have criticized him or cut ties with him, as local media outlets have recently noted.

Below, a compilation of some of Paladino’s most egregious remarks…

…about black leaders in Buffalo:

Paladino reportedly said that some black Common Council members were better suited to clean council chambers, rather than serve in office there, though he denies saying this. [Buffalo News]

Paladino told an audience at a Niagara Frontier Industry Education Council breakfast in 2008 that former Buffalo schools superintendent James Williams was only hired “because he was black.” [Buffalo News via archive.org]

In June 2013, Paladino distributed a memo claiming that former superintendent Pamela Brown was hired because “The BOE wanted a weak African-American Superintendent from out of State who they could control to protect their influence over the bloated budget and jobs.” [WGRZ]

Paladino referred to black female school board members as the “parasitic black sisterhood” and continues to refer to them as the “black sisterhood.” [Huffington Post]

In March 2015, Paladino posted a racist screed to Facebook, which he said was authored by an African-American supporter named Herman. The post read, in part: “We (Blacks) don’t understand capitalism, economics, or investments. We are selfish, and have [no] intention of taking responibility [sic] for our self. All we want is to have things given to us. Affirmative action, quota system and twenty points afforded to us is the result of what you are dealing with when it comes to the miniority [sic] school board members (Ignorance). You are an intellegent [sic] man, but you will never come across to those idiots. This is why, we are at the bottom of the food chain.”

Paladino replied by adding, in the comments, “Wow, Herman that was inspiring.” [B-Lo Ed Scene / Barbara Seals Nevergold accounts of Paladino’s Facebook post, which appears to have been taken down]

During his 2010 gubernatorial campaign, Paladino proposed housing inner city welfare recipients in prison dorms. He said: “Instead of handing out the welfare checks, we’ll teach people how to earn their check. We’ll teach them personal hygiene…the personal things they don’t get when they come from dysfunctional homes…You have to teach them basic things – taking care of themselves, physical fitness. In their dysfunctional environment, they never learned these things.” [Huffington Post]

Also, see Paladino’s “black sisterhood” remarks above and his general conduct at school board meetings, and the incident at Roxy’s described below. [WKBW]

In October 2010 when courting Orthodox Jewish leaders in Brooklyn, Paladino said: “We must stop pandering to the pornographers and the perverts, who seek to target our children and destroy their lives. I didn’t march in the gay parade this year — the gay pride parade this year. My opponent did, and that’s not the example we should be showing our children.” [NPR]

Paladino also said: “I just think my children and your children would be much better off and much more successful getting married and raising a family, and I don’t want them brainwashed into thinking that homosexuality is an equally valid and successful option — it isn’t.”

According to local comedian Kristen Becker, a drunk Paladino was kicked out of the lesbian bar Roxy’s for shouting “Show me your p—y!” at a dancer and then telling Becker, who intervened, to “shut up, you f—–g dyke.” PAI has independently corroborated Becker’s account with another person who was present. [Artvoice]

While running for governor in 2010, Paladino proposed using eminent domain to prevent the construction of a proposed Islamic community center in lower Manhattan. Of the group who planned the center, Paladino said: “Those who propose this mosque belong to a sect of Islam which requires all who don’t prescribe to this religion, be killed.”[Examiner]

…and most recently, about Asian students at UB:

At a protest against Olean State Senator Cathy Young, Paladino complained about “non-Americans” at the University at Buffalo campus and the “huge population of foreigners.” To reporters, Paladino blamed “those damn Asians coming here to go to school” for keeping local students from educational opportunities. [Olean Times Herald]

During his 2010 campaign, WNY Media released a large number of racist and sexist emails that had been sent and circulated by Paladino. Those emails included a photo of Barack and Michelle Obama edited to appear as if they were a pimp and prostitute from 70s-era exploitation films, a video of a tribal dance in Africa titled “Obama Inauguration Rehearsal,” a video of monkeys dancing a jig titled “Proof the Irish discovered Africa,” and a photograph of an airplane landing directly behind a group of African men captioned “Holy S—. Run n—–s, run!” The emails also included several hardcore pornographic photos and videos.

Coming tomorrow (6/18): Part II of this report will take a closer look at Paladino’s political network, and specifically at which elected officials accept significant funding from him.