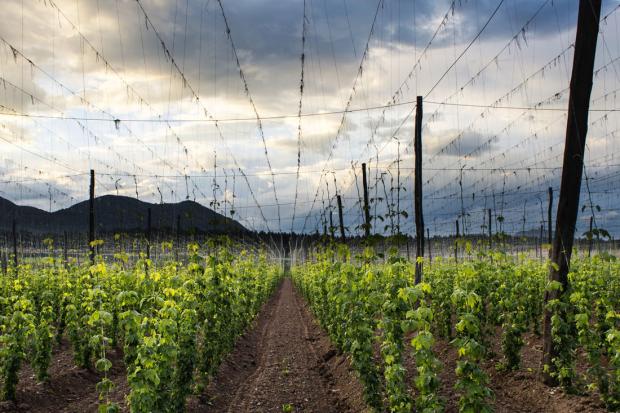 If there is one romantic attribute wine has always held over beer, it is its undeniable sense of place. As oenologists and aficionados never tire of reminding us, wine is born of the soil, what they call terroir, which encompasses everything from the clay content of the earth to the trade winds that rustle the leaves of the vinestock to the climate of the growing season and even, if you believe the biodynamists, the phase of the moon during harvest.

Beer? Well, beer has barley malt, but a brewer can work with the same stuff whether she is in Atlanta or Alsace, and while hops have a definite terroir of their own—check the differences between Cascade hops grown in Washington state, New Zealand, and northern Argentina if you have any doubt—you needn’t live near the hops to gain access to them. Which leaves us with water, I suppose, except that water profiles can be so easily manipulated these days that so-called “Burtonized” water can bring English Midlands minerality to anywhere in the world.

All of which is why I have long maintained that beer’s sense of place resides not in the making, but in the drinking. A kölsch poured from the barrel in the shadow of the Cologne cathedral, for instance, or a sulphurous cask-conditioned pale ale supped in a time-worn pub in Burton-on-Trent, or a one-litre Maβ of otherwise unexceptional helles lager enjoyed on a sultry summer day in Munich’s famed Englischer Garten. All these experiences, and many more besides, help connect the drinker to the drink, and definitely further the understanding of the beer.

Having spent the last half-decade traveling the world while researching The World Atlas of Beer and two editions of The Pocket Beer Guide, however, I’m beginning to doubt my once strongly held conviction. With craft beer now having taken hold almost anywhere brewing is permitted by law, and brewers in countries as diverse as Canada and South Korea, Italy and New Zealand, struggling to put their own nationalistic marks on their respective brews, perhaps there is more to beer’s place than I originally thought.

The notion first dawned on me about a decade ago in Italy, when craft brewing there was still in its relative infancy. A nation defined far more by its wine than its beer, Italy was breeding brewers interested in working not only with what raw materials they could get on the global market—the country boasts neither an abundance of local barley nor a hop crop of any significance—but also local flavoring agents. Over time, this inclination has led to outstanding Italian ales and lagers flavored with all manner of spices and herbs, even a salt beer conceived before gose took off as a popular fringe style, and even better beers made using the detritus of the wine industry, from used barrels to left-over grape lees.

What began as an isolated glimmer of a notion turned to a theory when I made visits to Brazil and New Zealand. In the former, the largest craft brewing land in Latin America, brewers had embraced the figurative and literal fruits of the Amazon, from woods typically used in the aging of cachaça, such as the cinnamony amburana, to fruits entirely unfamiliar to North Americans, like jaboticaba and taperebá. Their efforts were tentative at first, and in fact still form a small segment of an only modest market, but have grown bolder and more impressive with each passing year.

New Zealanders, meanwhile, have embraced Nelson-grown hops as their global calling card, and despite what you may have tasted in terms of domestic beers juiced with Nelson Sauvin or Motueka hops, are doing it far better than is anyone else. From the refinement of the New Zealand pilsner as pioneered by Richard Emerson of the now-Kirin-owned Emerson’s Brewing to the tropical fruit blast of a Tuatara Aotearoa Pale Ale, Kiwi brewers simply know how to use their own hops better because they have been doing it for longer. Much like Americans have for years been with US-grown Cascades and Centennials and Amarillos.

Eventually, I’m convinced, nations the world over will be touting their unique, indigenous approaches to beer. Japanese brewers are already doing it with various varieties of rice and saké yeasts, just as the northern French pioneered the use of chestnuts in beer—later taken up and improved upon by Italian brewers—and Mexicans have been developing the molé-inspired Mexican Imperial stout as their signature style.

Next up? Perhaps the Galaxy hop will lead to a definitive Australian beer, or Thai brewers will embrace various uses of green papaya and lemongrass, or Russian or Polish brewers will find some way to link their efforts with those of the country’s famed vodka producers. Whether one of these or something else entirely, you can be sure that it will draw us that much closer to beer having at last its own undeniable sense of place.

Stephen Beaumont has written, co-written, or contributed to a dozen books, including The Pocket Beer Guide and The World Atlas of Beer, both co-written with Tim Webb.

The Week in Beer

The Buffalo Niagara Brewers Association’s second annual Buffalo Brewers Festival will be held at Canalside this Saturday, rain or shine. The only regional festival held for and by local brewers, it features more than 30 New York State breweries, as well as the products of local farmers and chefs, food trucks, and live entertainment by the Skiffle Minstrels, Steve Johnson and Corey Kertzie (of Big Leg Emma), Flatbed, and the Steam Donkeys. Tickets are $45-$70 and include food and drink.