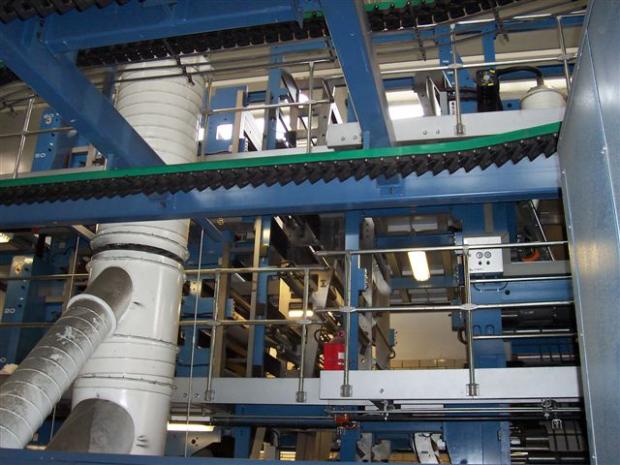 The pressroom at the Buffalo News. Image courtesy cirelectric.com.
by
Elmer Ploetz
/ Jun. 11, 2018 8am EST

FYI, the Buffalo News is hiring.

In the wake of its recent buyouts, the News is hiring for six newsroom positions and at least two technical/business jobs.

Reading between the lines, here are some observations  on what it all may mean.

None of the openings are in the eight positions the News targeted for buyouts last month. Most of them replace reporters who took voluntary buyouts.

Healthcare Reporter: This position would fill the coverage area left open with the departure of Henry Davis. It’s described as “health care development reporter,” so the emphasis will be on covering the growth of the downtown medical campus, medical start-ups, and “how the health care industry is reshaping Western New York.”

Enterprise Reporter: Enterprise is a trendy way of saying investigative (see below). The ad says “the ability to use data and public records to identify trends and develop compelling stories is a must.”

Enterprise Editor: The ads says the News wants someone to “work closely with veteran reporters to identify untold stories, both big and small, that reveal the surprising ways Buffalo and its surrounding communities are changing.” Data and freedom of information expertise is emphasized.

Trending Sports Enterprise Reporter: Think of this as someone to do what Tim Graham has been doing so well for the past several years, perhaps with an investigative edge. It effectively fills the desk vacated by either Jerry Sullivan or Bucky Gleason, but not that of both columnists.

Sabres Sports Reporter: This is a straight-up replacement of John Vogl, who took a voluntary buyout. The ad says the person who fills it will have “opportunities for television and radio appearances,” so the paper is planning to build the new reporter as a brand, as it had done with Bills reporters Vic Carucci, Mark Gaughan, and Jay Skurski, as well as with Sullivan and Gleason.

Deputy Sports Editor: This position fills the desk of Bob DiCesare, who took a voluntary buyout after 36 years with  the News.

Takeaways? A couple of jobs are gone. Two deputy sports editor positions have been vacated, only one is being filled. One enterprise reporter is replacing two columnists. The staff will almost assuredly get younger and could potentially get more diverse.

Aboard the BN Enterprise

Enterprise is a big word with the people running  the News right now. It’s a little nebulous to define, but here’s a try.

It includes traditional investigative reporting, but it’s also “investigative” in a larger sense. Stories like Graham’s pieces on Darryl Talley and Bjorn Nittmo (look them up; they’re worth the sizable time commitment) are good examples.

Enterprise essentially means going deeper, finding the real stories that matter to people that they may not have even known were there. Back in 2011, former Buffalo News editor-in-chief Margaret Sullivan phrased it this way: “We call them enterprise because—unlike a natural disaster or an election—they would not exist without the efforts of an enterprising reporter.”

But there are so many references to “enterprise” throughout the postings for the new jobs that it makes you wonder if it’s such a buzzword that it’s lost its meaning. Isn’t all journalism investigative at some level or enterprise after a fashion?

It seems to me that what’s at risk of being lost is the day-to-day journalism of covering communities through local governments, school boards, and even cops, the real nitty gritty. One of the News’s old philosophies was that there were big stories to be found in covering the small daily stories, that reporters should be out there, meeting people and sniffing out “enterprise” stories as they filed their “dailies.”

The News is headed toward a new kind of journalism. It simply doesn’t have enough people to cover things that way anymore. It will be hard-pressed to stay on top of what’s happening in the bigger first-ring suburbs, and smaller communities will go a long time between seeing a reporter.

Performing Without a Net

The News is being reshaped. As of this writing, 16 people at the News have taken buyouts. Half were targeted buyouts, the other half voluntary.

Of the eight targeted buyouts, two were part-time reporters and the other six were copy editors, page designers, and a clerk.

The takeaway on that is that the News is investing less and less in its print product and its quality control. Anybody who has read the News regularly over the years has noticed a disturbing increase in typos, grammatical errors, and general mistakes.

It’s a trend that goes back over a decade. When the News started encouraging reporter blogs around 2007, reporters asked, “Well, who do I have look at them before they’re posted?” They were told to have other reporters look at them or, essentially, just to post away. For most reporters, it was their first experience of not having the safety net of a copy desk to check for errors.

Since then, copy editing has been on the decline everywhere in the newspaper industry, even at the New York Times. The Times went through a similar process to  the News last year when it announced it was eliminating its standalone copy desk and its 100 jobs and inviting the staffers to apply for 50 new, redefined jobs.

The number of copy editing jobs at the News had already fallen precipitously in the past decade, with those left behind frequently forced to “shovel copy” instead of giving stories the close reads they might have required.

Meanwhile, the Buffalo Newspaper Guild has issued its own statement about the personnel changes happening in the editorial department (that means anybody involved in content, not just op-ed).

“There’s no sugarcoating what a blow this is to journalism in Western New York,” said Guild president Sandy Tan on the union’s web page. “We’re losing respected colleagues whose work has been invaluable to this newsroom and to this community.”

According to the Guild statement, the current cutbacks represent a 16 percent loss in Guild newsroom staff and 20 percent in reporters and columnists.

What’s interesting is how the News approached the buyouts. While some taking them were near retirement or had other reasons to accept a buyout, the News’s message could be interpreted as veiled threats.

“Because of the union’s contract language, the News does not have the ability to unilaterally terminate specific employees,” said the Guild statement. “But there were mitigating factors that left some Guild members feeling they needed go.

“Many were facing reassignments into unknown or dramatically different job duties. Part-time reporters faced an 80 percent cut in their hours, resulting in a non-sustaining wages and making them ineligible for benefits.”

Meanwhile, while members of the Newspaper Guild/CWA made their exits at the News in a more or less civilized way with cake and goodbyes, non-union folk weren’t so lucky.

In the past 10 days, two long-time non-union employees were dismissed. One worked in marketing, the other as business system manager. One had  29 years experience, the other 41.

The paper said both positions were being eliminated.

Meanwhile, the paper is advertising for a system administrator opening that seems very similar to the business system manager post..

The paper is also hiring a javascript developer as the paper is “creating a smaller startup within our organization to help develop industry changing technologies that will change the way that people read and experience content.”

It’s been interesting diving back into writing and some reporting over the past couple of weeks. So I’m not ready to stop yet. I’ve decided to continue reporting on the media, plus whatever else I find of interest, under the label of “News, Etc.”

I won’t guarantee how often I’ll be writing, but check back and see what’s here.

If you’d like to get in contact with me or give your side of what’s happening, email me at eploetzfredonia@gmail.com.